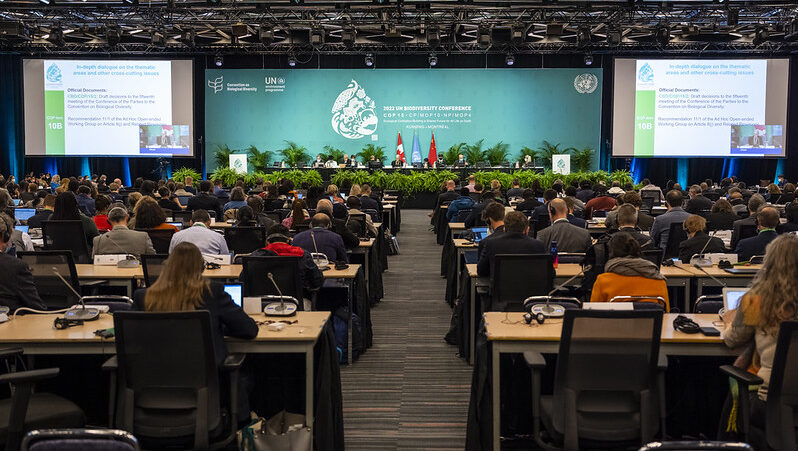 With one week left to strike a “once-in-a-generation” deal to protect nature in Montreal, Canada, governments are split over how to stop subsidising harmful activities like unsustainable fisheries and agriculture.

A report commissioned by Business for Nature estimates $1.8 trillion is spent each year on subsidising destructive activities for nature such as the growth of fossil fuels, monocultures and overfishing.

“As a priority, existing resources need to be used more effectively, including by aligning all financial flows with nature-positive objectives and by addressing harmful subsidies,” said the European bloc in a statement.

Countries like India and Japan have opposed entirely eradicating subsidies. India’s lead negotiator, Vinod Matur, told Carbon Copy the country’s farmers “who are poor and disadvantaged need both social and economic support”. Japan pushed to remove references to agricultural and fishing subsidies in the lead up to the negotiations.

Argentina, one of the world’s largest meat producers, supported the elimination of harmful subsidies but questioned the world’s capacity to actually redirect them, considering it a form of “creative accounting” to justify current subsidies.

One Latin American negotiator, who wished to remain anonymous criticised the EU’s position. “We think the situation is concerning. We think the lack of flexibility of some developed countries is particularly worrying,” they said.

It is a key battleground this week when the issue is formally discussed in plenary negotiations, said Costa Rica’s lead negotiator Eugenia Arguedas. Costa Rica is chairing a coalition to protect 30% of the planet’s land and water ecosystems by 2030.

Li Lin, senior director of policy and advocacy at WWF, added that countries focused on “minutiae” during the first week of talks, leaving the “big-ticket items” to the second week. “They have left themselves a lot to do in the next few days,” he said.

Almost 200 countries have gathered in Montreal to negotiate the world’s strategy to reverse biodiversity loss and protect the globe’s frail remaining ecosystems, which are key to stopping climate change.

A recent UN scientific report warned that at least a million species are threatened with extinction, an “unprecedented” decline in all of human history.

Opening the talks, UN secretary general Antonio Guterres said that divesting harmful subsidies is one of the key outcomes expected.

“[We need a deal] that addresses the root causes of this destruction — harmful subsidies, misdirected investment, unsustainable food systems, and wider patterns of consumption and production,” Guterres said.

Observers agreed that this will be one of the main clashing points, as it has been during the previous negotiations leading up to the Montreal summit. But the head of IUCN’s forests and land team Carole Saint-Laurent said these redirected subsidies could be a fresh source of resources.

“We see tremendous potential in redirecting harmful subsidies to investments in restoration of ecosystems,” said Saint-Laurent, who added this could become a “win-win” for all countries.

Countries made some progress in June, when the World Trade Organization (WTO) reached an agreement to ban certain kinds of unsustainable fishing subsidies, an issue that had stalled since 2011.

For the first time, countries agreed to ban subsidies for unregulated fisheries, fisheries targeting overfished stocks and fisheries in the “unregulated” high seas. Now, two thirds of WTO member states need to formally accept the agreement and start implementing it.

But after almost two years of online and in-person negotiations and with only a week left to reach a successful outcome, observers have also warned of the risk of not reaching an agreement in Montreal.

Campaigners have also called out delegates on the slow progress in other topics, such as a mechanism to monitor each country’s actions to meet the targets.

“Negotiators look to be taking a hatchet to the ratchet here in Montreal. We are sleepwalking into repeating the mistakes we made in Aichi [where the last deal was struck in 2010]. We are at risk of having vague commitments with no substance,” said Guido Broekhoven, Head of Policy Research and Development at WWF.