‘Kunming-Montreal’ deal sets up new fund for biodiversity by 2023 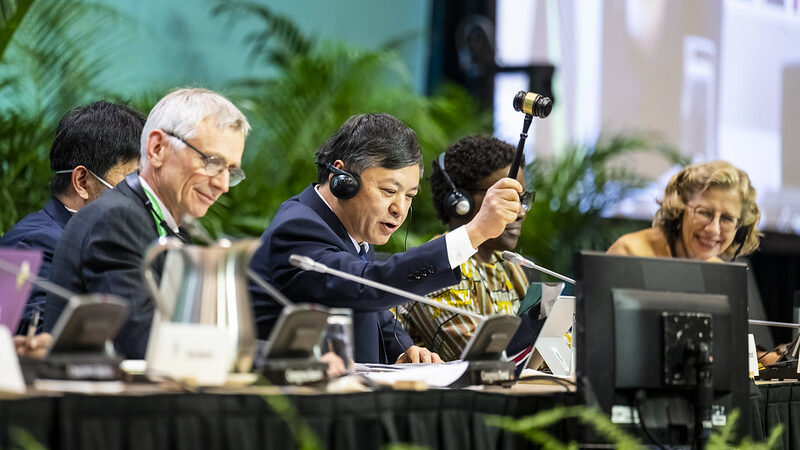 Countries adopted the Kunming-Montreal deal to protect 30% of the world's land and water ecosystems after an early morning plenary. (Photo: UN biodiversity)

Almost 200 countries adopted the Kunming-Montreal biodiversity deal on Monday, which included a proposal by developing countries to set up a new fund for nature protection by 2023.

The fund will help implement the goal of protecting 30% of the world’s land and water ecosystems by 2030, also featured as the central target of the biodiversity agreement.

In the final text, countries agreed to mobilize $200 billion from different sources (including direct grants, philanthropy and private funds), while ending at least $500 billion worth of harmful subsidies.

To channel some of that money, countries adopted an initiative by Brazil and African countries to establish a new trust fund. The Global Environmental Facility (GEF) will establish the fund by 2023 and it will later have its own governing body.

EU president Ursula von der Leyen said in a statement it was “very positive” that countries adopted measurable targets to protect nature, “as well as a mechanism to finance their implementation with the Global Biodiversity Fund.”

The Plenary: Adoption of Decisions has officially started! 🌿

Watch live in order to learn what is happening at #COP15 🌱

In Montreal, delegates from every country in the world except for the US negotiated a deal to reverse the loss of biodiversity by 2030. Governments agreed to protect 30% of the world’s land and water ecosystems by that date.

To achieve this goal, backing it with proper finance was a key lesson from last decade’s Aichi biodiversity agreement, which failed to deliver on every target set. The funding gap for biodiversity has been estimated at $700 billion per year.

Lina Barrera, vice-president for international policy at Conservation International, said the creation of the new biodiversity fund is a “necessary step”, but added “there is still farther to go” to close the funding gap.

One Latin American negotiator told Climate Home the initiative for a new fund emerged from the need of some developing countries to access cooperation funds quickly, which was often not possible through the GEF.

“It takes too long from the moment you apply (to GEF funds) until the money gets to the field. The risk is implementing (the Kunming-Montreal deal) quickly, given we have only eight years left until 2030,” the delegate said.

Early in the negotiations, a group of 20 countries harbouring 70% of the world’s biodiversity called for a “supplementary global biodiversity fund” to be set up in order to “overcome the concerns regarding accessibility of funds”.

The final text reflects some of these concerns, as it calls on the GEF to set up a fund “with a simple and effective application and approval process, providing easy and efficient access to resources.”

Carlos Manuel Rodríguez, CEO of the GEF, welcomed the adoption of the Global Biodiversity Fund and said the facility would work to operationalise the fund “in a timely manner”. “Today’s agreement is wonderful news, and it creates real momentum as we push toward 2030 and the critical goals ahead of us,” he added in a statement.

However, most of the fund’s money will come from other sources such as private sector or philanthropy, as developed nations only committed to directly provide $20 billion a year by 2025 and $30 billion by 2030.

Megaforested nations such as Brazil and the Democratic Republic of the Congo both criticised this financial pledge, with the DRC threatening to veto the whole agreement over this. In the final plenary, the country’s vice-minister Ève Bazaiba welcomed the Kunming-Montreal deal while “expressing reservations” on the financial target.

Observers welcomed the creation of the Global Biodiversity Fund as well as the targets from the Kunming-Montreal biodiversity deal, while stressing the need for broader reforms.

“[The biodiversity fund] will not be sufficient to solve the biodiversity finance challenge: we need deep reforms in financial institutions, in particular the International Monetary Fund and the World Bank,” said the human rights NGO Avaaz in a statement.

Just a month ago, at the UN climate change talks in Sharm el-Sheikh, the world’s governments also agreed to set up a new fund to aid victims of extreme weather events.