An oasis of climate commitment in a desert of Trump panic, the UN talks made steady progress on putting the Paris Agreement into action 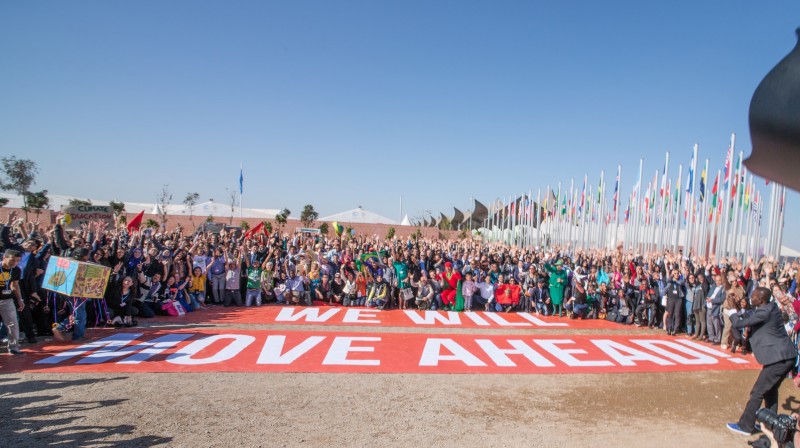 It will go down in history as the Trump COP. Marrakech 2016 has had an orange cloud hanging over it – and not from the desert dust.

But amid the flapping over what the permatanned POTUS-to-be means for climate action, negotiators have been steadily getting on with the job.

Here are the top takeaways from two weeks of crunching over the nitty-gritty of how to put the Paris Agreement into practice.

On the penultimate scheduled day, the conference adopted a call for all nations (yes, you too Donald) to honour promises made in Paris and renew their attempts to stave off disaster.

The one-page document contained little new information. But it was absolutely necessary, said observers, for the conference to make a political statement of resolve after the election of a climate sceptic to the US presidency.

The question is, will it line the bottom of the UN climate process enough to stop other leaders deciding to quit?

Here’s one for lovers of palindromic numbers. During the conference, 11 governments ratified the Paris climate agreement – Australia, Botswana, Burkina Faso, Djibouti, Finland, Gambia, Italy, Japan, Malaysia, Pakistan and the UK. They brought the total for November to 22 and since the beginning of September a cavalcade of 88 nations have joined the party.

The total needed for the agreement to become law, which it did in the week before the conference began, was 55 nations representing 55% of global emissions. The number of nations joined by the end of the meeting? 111.

The Paris Agreement acknowledges that voluntary national emissions targets are not enough to meet its global warming goals. But one year is not long enough, it seems, for governments to bring forward tougher carbon cuts.

Instead, the focus in Marrakech has been on initiatives to reinforce existing plans, with some countries promising to review ambition by 2020.

Notably the Climate Vulnerable Forum, a 47-strong coalition of developing countries, declared it “will strive to lead” the green transition – ultimately going 100% renewable.

The US, Canada, Mexico and Germany published strategies for radically cutting their greenhouse gas emissions by mid century at UN talks, meeting a requirement of the Paris Agreement.

It’s likely the US plan will gather dust for the Trump presidency, although as lead envoy Jonathan Pershing said, it was a useful analytical exercise for the country’s policymakers.

Peru, Ethiopia and Norway were among 22 countries backing the “2050 pathways platform” championed by French envoy Laurence Tubiana. Fifteen cities and nearly 200 businesses are also on board.

On the rulebook for monitoring greenhouse gas emissions, politicised decisions on the balance between national sovereignty and global uniformity were put off until another day.

Still, observers and negotiators seemed broadly satisfied with the timetable agreed for ploughing through the technicalities.

Countries agreed that 2018 will be the next major meeting of talks under the Paris Agreement, and also that they’ll try and get the rulebook for it ready that year too.

It doesn’t mean they get a year off in 2017: they’ll have to work on the nuts and bolts of the agreement through two sessions in spring and winter, both of which will take place in Bonn.

Governments agreed to more consultations but there will be no new or extra meetings.

Aside from a few strategic funds, this was not a COP for new financial pledges.

Donors including the US, UK and Germany stumped up $50 million to improve carbon accounting in developing countries; there was $23m for a centre to share clean technology expertise and Germany almost single-handedly replenished the Adaptation Fund, which had asked for $80m.

While important, those are a drop in the ocean of the $100bn a year rich countries have promised to mobilise by 2020.

Developing countries cautiously welcomed a roadmap to that figure prepared by the UK and Australia, with some reservations about the accounting methodology. A UN decision also welcomed this, but critically did not endorse it.

Their main concern is a persistent shortage of cash for adaptation to the impacts of global warming, which are hitting the poorest hardest.

Perhaps surprisingly, one of the last-day controversies was whether the Adaptation Fund, started under the Kyoto Protocol, had a future with the Paris Agreement.

Handling tiny cash flows compared to the flagship climate finance initiative for Paris, the $10bn Green Climate Fund, it is favoured by recipients because of its readiness to support small projects. But a major source of revenue, the Clean Development Mechanism, is drying up, with talks on its future postponed for another six months.

Aside from the money, initiatives like the Adaptation of African Agriculture aimed to make dealing with droughts and floods a common endeavour.

The sticky question of how to approach recompense for the damages caused by climate change was carefully punted down the concourse of the Bab Ighli centre. There was a discussion that agreed to a framework that will provide the basis for the next five years of talks.

It’s a result that no one was particularly exercised about. Some small island and developing states, which are already suffering from the pollution that made other nations rich, complained about the lack of progress. Tosi Mpanu-Mpanu, who chairs the least developed country bloc, said some countries had tried to “dilute” the mechanism.

It was billed as the “Africa COP” and African countries walked in with clear demands.

In order to meet their Paris commitments they need more money to adapt to climate change, and more support to develop their infrastructure on many fronts, including data collection, climate diplomacy and research. As so many times before, the donations left them disappointed.

However, many leaders were keen to move beyond a dependence on aid. They fleshed out the ambitious Africa Renewable Energy Initiative (AREI), which plans to achieve 10GW of additional generation capacity by 2020 and 300GW by 2030 – appealing to private investors not just public donors.

The Democratic Republic of Congo, Mali and other African countries signed up to the new NDC partnership, a knowledge sharing platform which will help developing nations fulfil their climate pledges.