Comment: During the hottest year on record, Karl Mathiesen travelled to Tasmania and found his home irreparably changed 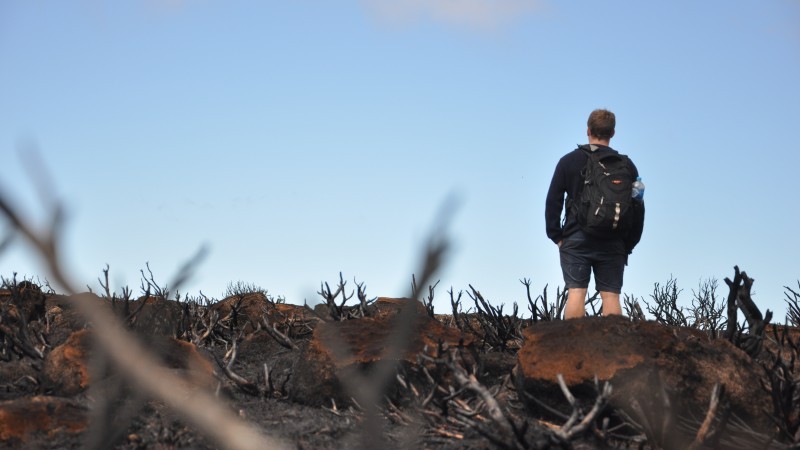 "Standing amid the skeletons of cushion plants, I wept tears of frustration". Photo: Emma Doxiadi

When I arrived to visit my family in Tasmania, Australia in early February of this year, something was obviously, terribly wrong.

No-one could remember a drought so bad. The hydroelectric dams – long the majority electricity suppliers – were at their lowest in history and a backup cable that sends coal-driven electrons from the mainland of Australia in times of need had mysteriously failed. Diesel generators had to be dusted off and switched on.

Along the coast, millions of oysters suddenly died of disease as a massive bubble of hot water washed down from the north. Many oyster farmers lost their jobs.

As they discussed the weirdness they were observing all around them, my family and friends had a panicked look. This wasn’t the world they grew up in.

Throughout 2015 and 2016, the El Niño weather cycle released a huge quantity of stored heat into the atmosphere. The global temperature – already elevated by around 1C by greenhouse gases – jumped by another 0.1-0.2C.

Meteorological organisations have crowned 2016 as the hottest year ever recorded, trouncing 2015’s record and meaning that all of the last 16 years have been among the hottest 17 since records began. Droughts, floods, fires and intolerable heat visited every habitable continent.

But it’s all just numbers until you lose something dear to you.

In Tasmania, the sense of a crisis peaked when a massive lightning storm set fires burning across the land. The central plateau – normally a wet boggy alpine forest – was set ablaze.

While the fires rampaged, I visited a devastated valley in the World Heritage protected area. Standing amid the skeletons of cushion plants, I wept tears of frustration. Blackened, thousand-year-old trees stood like victims of war, strung up as a warning that the new regime will be brutal.

Pencil pines just days after the central plateau fires. These trees live for more than one thousand years, but they cannot survive fire (Photo: Emma Doxiadi)

For many Tasmanians, myself included, climate change had long been a far away problem. Mostly, it seemed, the tragedy would strike in countries that were poor and vulnerable. But in 2016, climate change entered our intimate world.

It feels glib to focus on the loss of a forest, however special, when people are dying or losing homes. Right now 40 million people are short of food in southern Africa because the rains have failed.

Of course these disasters outweigh the thousand smaller cuts those lucky enough to avoid them might experience. But 2016 showed us that no-one and nowhere will be unaffected.

This is something worth considering when the largest developed economy on earth has placed its faith in a president who appears to see little connection between greenhouse gas emissions and the wellbeing of his people.

Donald Trump’s election cast a shadow over UN climate talks in Marrakech in November. Negotiators watched apprehensively as serious climate heavyweights in the US diplomatic team departed the scene for the last time.

US secretary of state John Kerry flew to Morocco to deliver an emotional speech and a defiant message that the process was “bigger than one person, one president”.

Certainly, the more US citizens can make connections between events at home and the warnings of scientists, the harder Trump will find it to follow through on his threats to “cancel” the Paris deal.

And when we start looking, we can find the effects of climate change everywhere. Just before the meeting in Marrakech, I returned to Tasmania.

Newly licensed to scuba dive, I hoped to see the last remaining giant kelp forests on the island’s east coast. This great ecosystem once stretched along hundreds of kilometres of that shore. The trees, sometimes more than 40 metres tall, create a magical, waving underwater playground. Divers go misty when they recount the wonder of flying through the canopy.

But the trees are disappearing. In the past few decades warm, nutrient poor waters have starved the giant weeds and the great expanse was reduced to a single patch in the corner of one bay.

Knowing it might be my last chance, I had planned to visit it in October. But when I called Mick Baron, who runs diving tours to the forests, he told me the trees were gone; wiped out by the most intense underwater heatwave anyone on the coast could remember.

“It won’t be long before I’m doing other things,” said Baron, who has dived for more than 40 years.

Global warming is changing the fundamental conditions that have underpinned entire lives, entire societies. There is a word for the mental anguish experienced by those whose environment is changing or lost – solastalgia. The definition is very specific. It only occurs when the environment is one to which the sufferer relates on an intimate and familiar level – when it is home.

Karl at home, standing above the Blue Tiers rainforest in the north east of Tasmania. (Photo: Emma Doxiadi)

El Niño’s temperature shock has sent climate change blundering through my reality and the things I love and hold dear are not safe. No longer is fighting climate change an altruistic pursuit – if ever it was. In 2016, a year that broke new ground across the globe, I imagine there are many others around the world who have had this experience.

Next month I’m hoping to be in the Maldives, bearing witness to the destruction of coral reefs. The bleaching event that has sloshed around the world’s oceans for more than two years is set to continue into 2017, according to US government scientist Mark Eakin.

I have never had the fortune of seeing a healthy coral reef, which makes me sad. But it’s not the same level of grief I felt when I stood in the burned alpine woodlands of Tasmania. Coral reefs are part of someone else’s home.

Similarly, I won’t miss the Iditerod – the 1,000 mile Alaskan sled race that faces an uncertain future as snow recedes. I can only sympathise with those who live for it every year.

Each lake, farm, or forest, each vegetable patch, or coastal walking path, or city park, or fishing spot is part of some person’s home. What is most dear to you? The idea that these fundamental elements of our homes are in danger may seem far-fetched. But that’s what I thought a year ago.