From Jerusalem to Glasgow, peacebuilding must address climate stressors

Comment: In many conflict zones around the world, climate change is intensifying competition for scarce natural resources, calling for a different approach to security 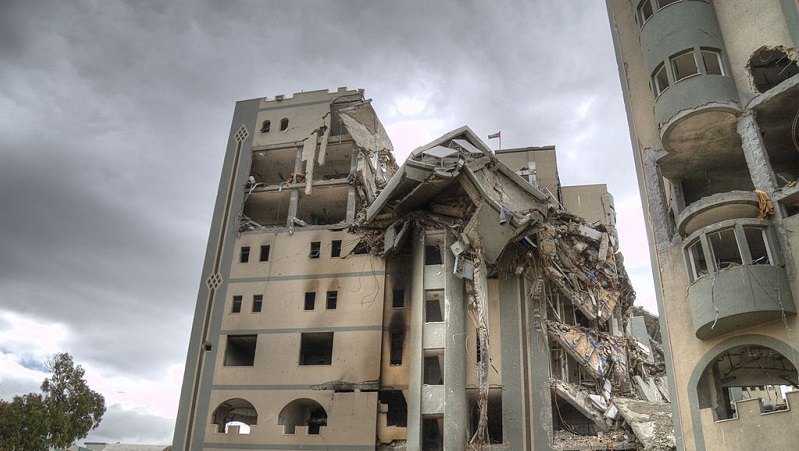 A building in the Gaza region of Palestine is damaged by Israeli bombing in 2009 (Photo: Gloucester2Gaza/WikiCommons)

When armed conflict breaks out, changes in the climate and natural environment are rarely front and centre in the analysis of how and why the fighting started.

During the recent terrible escalation of violence between Israel and Palestine, for example, attention was – rightly – focused on the direct political causes of the conflict.

But, as a new report highlights, the Middle East is one of the regions in the world where climate change poses an increasing challenge to peace and security. As climate change worsens the region’s natural resource scarcity, already low levels of socio-ecological resilience diminish and existing grievances over resource allocation increase, along with social tensions and political conflicts. This poses yet another hurdle to resolving one of the world’s most intractable conflicts.

More and more evidence points to the impacts of climate change on conflict dynamics around the world. Climate change disrupts where people live, what they can eat, and how they earn a living. In fragile contexts like Afghanistan, Mali and Sudan, this has had a clear impact on instability and violence.

The risks are not a future problem. They are already here and projected to get worse. By 2050, climate change is estimated to create up to 86 million internal migrants in Sub-Saharan Africa, most of whom will move to already resource stressed locations. Increased competition for resources, some of which will dwindle further due to the effects of climate change, risks creating conflict and undermining social balances within and between communities.

However, the solution is not simply to bring in the heavy artillery. These hard security problems require soft security responses that recognize the climate-related root causes of the conflict – things like unequal access to natural resources like land, or ineffectual governance. Failure to consider these climate-related security risks can make conflict dynamics worse.

In the Lake Chad region of the Sahel, for example, international counter-insurgency forces attempted to flush out members of Boko Haram and other armed groups by creating ‘no go’ zones with road blocks, slash-and-burn tactics and by clearing fertile lands. These climate-blind approaches undermined local resilience to cope with changing rainfall patterns, turning local populations against the state and giving them an incentive to join the very armed groups being targeted.

Instead, the solutions need to cut across the ‘three Ds’ of development, diplomacy and defence, and be integrated into climate mitigation and adaptation. Climate policy must take into account that conflict zones are those least able to adapt to climate impacts or fulfil their climate commitments.

As host of Cop26, the UK is well positioned to bring a conflict-sensitive lens to fundamental areas of climate negotiations, having recently scaled up expert capacity on climate security in the Foreign, Development and Commonwealth Office.

For all parties, the first step is better assessment; global action must be informed by local conditions. Local, national and international decision-makers across all arms of government need access to evidence-based analysis of climate-related security risks.

That is why together with the Potsdam Institute for Climate Impact Research, the think tank adelphi is leading a new initiative that combines state of the art climate change data with analysis of social and economic conditions. Our mission is to identify sustainable, low-risk options for preventing violence and supporting adaptation and resilience. We want to find out what concrete actions can be taken to prevent or reduce climate-related security risks, or indeed to avoid doing harm.

In the Middle East, this could include promoting a shared approach to water scarcity as a much-needed springboard for negotiations to tackle the other more intractable aspects of the dispute. In the Sahel, it means a course correction in tactics used to counter armed opposition groups, to address the impacts which climate variability is having on the conflict. Across the climate change community, it means putting climate-security risk assessments at the centre of initiatives in order to help build truly sustainable resilience among the people most vulnerable to climate change.

Janani Vivekananda is Head of the Climate Diplomacy and Security Programme at adelphi, a think tank based in Berlin