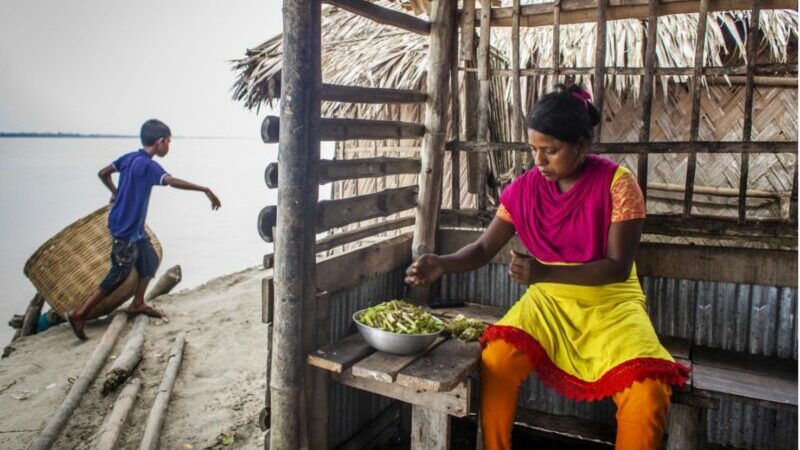 Bangladesh's early warning system for cyclones saved millions of lives when Amphan hit the country in 2020- but thousands of homes and livelihoods were destroyed (Photo: UN Women/Fahad Kaizer)

A consortium of think tanks is urging Cop 26 delegates to put the needs of developing and climate-vulnerable countries and communities first at this year’s negotiations.

In a statement published Thursday, the consortium, Allied for Climate Transformation by 2025 (ACT2025), says that the Glasgow conference will be a “decisive, no-turning-back opportunity” not only in achieving Paris Agreement goals, but in setting the groundwork for real action in places most at risk.

“It is also a critical moment to rebuild trust, restore justice, and strengthen solidarity between developed and developing countries and reinforce confidence in the multilateral climate regimes,” the report writes.

“Success at Cop 26 can only be achieved if developed countries and major emitters demonstrate genuine leadership and show credible commitment to transformative change, and real cooperation and solidarity with climate-vulnerable countries to solve the climate crisis.”

Drawing on warnings from the latest Assessment Report from the Intergovernmental Panel on Climate Change (IPCC), ACT2025 says a large gap exists between the physical science basis and policy practices, so urgency is needed now.

“It is indisputable that human activities are causing climate change, making extreme climate events including heatwaves, heavy rainfall, and droughts more frequent and severe, and unless there are immediate rapid and large-scale reductions in greenhouse gas emissions, limiting warming to 1.5 will be beyond reach,” said Youba Sokona, vice chair of the IPCC who spoke at the statement launch event as part of the high-level event launching the consortium’s statement last Thursday.

“The fossil fuel industry is the major culprit and we have to focus on them,” said Ambassador Diann Black-Layne of Antigua and Barbuda, chair of the Alliance of Small Island States. She also criticised governments that missed the opportunity to build back better from Covid-19 by investing in cleaner sources of energy and weaning themselves from a dependence on fossil fuels.

But rather than heeding warnings with a sense of hopelessness, Ani Dasgupta, president and CEO of the World Resources Institute argued that this should fuel ambition among nation states. He said the IPCC report should be seen as a “clear call for action” to combat the climate crisis.

The ACT2025 Alliance Statement presents five key pillars for success at Cop 26, which were informed through consultations with a range of partners and stakeholders following the UN climate negotiations.

The consortium recommends that all countries, especially major emitters, strengthen their climate commitments to align them with limiting global temperature increase to 1.5 degrees. G20 countries, which account for 75% of GHG emissions, are the most responsible to make deeper emissions cuts, according to a new report by WRI and Climate Analytics. While the next round of climate plans needs to be significantly more ambitious by 2025, the consortium says that those plans not aligned with a 1.5 degrees pathway should be adjusted much earlier, such as by 2023.

The statement also called for developed countries to deliver on their promise made in Copenhagen to mobilise $100 billion annually by Glasgow, as well as agree on a delivery plan for the new finance goal established under the Paris Agreement. In addition, countries should agree on ways to make this funding more accessible to vulnerable developing countries, with more grants, less loans and more concessional finance, especially for adaptation action.

“We need to answer the question: are you going to provide the resources to help us meet 1.5 degrees” asked Layne-Black during the launch. “We have an agreement that we are going to compromise on behalf of our people to accept 1.5 degrees impacts, and you need to give us the money to soften that blow.”

The alliance statement also underscores how critical increasing resilience and reducing vulnerability is to ambitious climate action. The consortium calls on countries to strengthen tracking of adaptation action, particularly on the work surrounding the Paris Agreement’s adaptation goal.

With the latest IPCC report concluding that every region of the globe now experiences climate impacts, another key priority for vulnerable developing countries is how to manage losses and damages to climate impacts that are so severe they cannot be adapted to, such as sea level rise and land no longer fit for agriculture.

The consortium calls on developed countries to set up effective mechanisms that foster technical assistance, and to explore financing options.

“Developed countries should not be limited to lip service. Come with a specific action plan on loss and damage,” said Abul Kalam Azad, special envoy of the Climate Vulnerable Forum, Presidency of Bangladesh.

And finally, the consortium lays out critical recommendations for the resolution on outstanding rules for the implementation of the Paris Agreement. These include guidance for reporting climate efforts more transparently, setting common timeframes for national climate commitments, and ensuring carbon markets lead to credible emission reductions.

Ultimately ACT2025 is urging for ambition, solidarity, and prosperity at Cop 26 and beyond, by holding to account all countries, especially major emitters, to their commitments .

“We are in the red zone. Reaching the point of no return is no longer a fantasy that will happen in the future. We are right in the middle of it,” said Ineza Grace, co-director of the Loss and Damage Youth Coalition.

“We need to do something so we do not leave behind a damaged world.”

It remains to be seen if Cop 26 will deliver a “Glasgow Pact” that lives up to ACT2025’s Call to Action. Yamide Dagnet, director of climate negotiations at WRI, said that Cop 26 must “propels us into full and real implementation of the Paris Agreement. Countries need to get in sprint mode.”

This post was sponsored by the World Resources Institute. See our editorial guidelines for what this means.