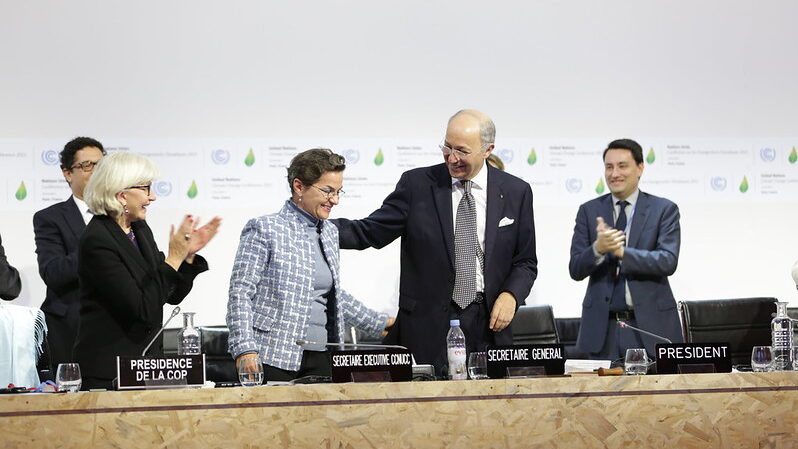 The adoption of the Paris Agreement in 2015 (Photo: UNFCCC)

The signing of the Paris Agreement introduced the world to new language and concepts around tackling the climate crisis.

National governments signed up to keep global temperatures “well below 2C” and to pursue efforts to limit the increase to 1.5C. The immediate years after the deal led to a wave of interest around how this can be achieved and how it translates into action for people, governments, and business.

Since 2015, many corporations have recognised their crucial role in tackling the crisis, with early adopters setting bold targets to reduce emissions quickly. It is now commonplace to hear of another big business pledging to cut their greenhouse emissions by X amount by, say, 2030, or 2050.

As public concern around climate change has grown, business has recognised the need to do something. But the difficulty lies in trying to work out what all these new climate targets mean, and how to hold companies to account on what actions they are taking.

The Science Based Targets initiative (SBTi) was set up after Paris to support businesses by translating the goals of the agreement into meaningful climate action. It’s become the gold standard with targets independently validated by a group of experts. To win approval a company’s target needs to provide a clear pathway to reducing greenhouse gas emissions and be in line with the latest climate science.

The initiative has seen strong growth in recent years. There are now over 2,250 companies with science-based targets – up from 500 a couple of years ago – spanning 70 countries and 15 industries.

But the need for stronger climate action has become clear and corporate commitments need to keep up. Where the Paris Agreement led with “well below 2C”, the focus now is on keeping the goal of 1.5C alive.

The concept of “net zero” has also been introduced to tackle the crisis. Nowhere in the text of the Paris Agreement does this term exist, but it is now essential to credible climate action. Net zero is a state where all greenhouse gases put into the atmosphere are equally removed, or neutralised. To avoid the worst impacts of climate change, governments and businesses need to reach this state with their own emissions.

As interest in science-based targets has grown, so has the need to toughen up what counts as a credible plan. The introduction of the new Net-Zero Corporate Standard by SBTi aims to do just that. The new criteria require companies to make rapid, deep cuts to emissions across their entire operations and supply chain.

A credible net zero plan needs to have targets both in the short and long term, and crucially companies are unable to claim to have reached net zero until those long-term targets have been met. This means companies will need to take proactive steps to reduce their emissions by at least 90-95% by 2050 to meet the new standard. In addition, carbon offsetting is only permitted for the final few percent which cannot be eliminated. The standard also asks companies to go beyond their own business by making investments to tackle climate change elsewhere.

While only 11 companies have an approved net-zero target under the new framework, over 1,000 have reportedly made a commitment to do so.

Ørsted, a global renewable energy company, is one of the few to currently have their net-zero target signed off by SBTi. Their new plan includes a target to reach net-zero emissions across the entire value chain by 2040.

Mads Nipper, company CEO, said last year that “the only route to a climate-safe future is one that prioritises emissions reductions, both in the near and long-term”. Ørsted is also the only energy company on the Net-Zero Standard list, an important distinction given that the sector contributes 73% to global greenhouse gas emissions.

This point was brought out by a recent report from SBTi which looked at the climate progress of “high-impact” companies. Out of this group of over 2,200 companies across all sectors of the global economy, only 32 companies in power generation had made commitments to cut emissions. Not only were heavy-emitting industries absent, but a very high number of targets were being set by companies based in Europe, North America, or Japan.

It might be the case that many companies have set strong climate targets and haven’t engaged with SBTi, or communicated their plans to the public. But this lack of transparency makes it much harder to judge the credibility of company targets, and to help them improve as time goes on.

Nipper added: “We need bold but credible net-zero plans from companies. If you are a business leader who wants to walk the talk, I encourage you to align your company’s climate strategy with what is required by science.”