Comment: Indigenous peoples and local communities receive less than 1% of all climate funding despite scoring wins for people and nature 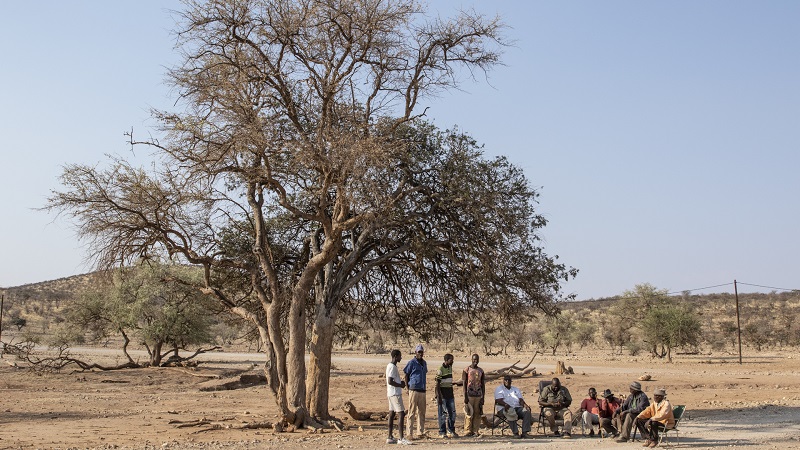 I am Namibian. I come from a country where drought has become a common occurrence and a way of life; not knowing if and when it will rain is slowly becoming the norm.

We adapt because we have nowhere else to go. When I visit my parents’ homestead up north each December, the question I ask after greeting them is “omvula?” which loosely translates to “and the rain?”. I go with water in mind: will the rains come, and we can relax, or won’t they, and we need to exhaust the borehole?

If this sounds like a difficult life, let me tell you, comparatively, it’s not. We are not wealthy, but we are privileged. My parents had jobs and now have a pension. They live comfortably, for the most part.

Throughout my childhood we could always access clean water; always had food on the table and access to quality healthcare. I went to school and to university. I could dream. I could make my own choices. That in itself is a privilege. The same privilege that gives me the opportunity to write this piece.

In Namibia today, accessing clean water is a privilege which most people where my parents live don’t enjoy. They are forced to walk extra kilometers to collect water from hand-dug wells, and carry it in the ever-intensifying heat of December.

These are the same people and places that are experiencing some of the worst effects of climate change, such as increasing droughts, yet who bear the least responsibility for causing it. To me, climate justice is synonymous to social justice. It is a world in which everyone has choices and the ability to dream.

Cop27 gives the world a huge opportunity to address this injustice. The Intergovernmental Panel on Climate Change (IPCC) has already made the devastating climate impacts being experienced with just 1.1C of warming very clear. They warned how much more extreme the impacts will be as temperatures rise to 1.5C and beyond.

The most pressing financial needs of the most vulnerable countries are just as clear. But my worry is that once again, at yet another summit, global policy makers, NGOs, and business leaders will meet to talk about ways we might tackle climate change and protect nature. What’s needed is action.

We, in vulnerable countries, already see the impacts of inaction so frequently, we are not talking about how to adapt. We are already adapting.

In Namibia, there are plenty of examples. One organisation I work with and support called Integrated Rural and Development Nature Conservation (IRDNC) has helped local communities secure their legal rights to manage their own natural resources, which has helped restore huge areas of land and protect wildlife on a remarkable scale over the past three decades.

The endangered black rhino population has tripled. The area given over to conservation areas owned and managed by local people who live there alongside wildlife has increased to roughly 16 million hectares – larger than all of Greece. These conservancies are earning nearly $10 million annually, making conservation a key part of economic development.

This all makes a huge contribution to the global effort to tackle climate change. Again, the latest IPCC report identifies safeguarding biodiversity and ecosystems as “fundamental to climate resilient development.” One-third of our global carbon emission reductions targets could be met through healthy forests, wetlands, mangroves, and grasslands.

Indigenous Peoples and Local Communities (IPLCs) on the frontlines of climate change across Africa, and around the world, are keeping these important ecosystems intact, healthy, and thriving. They are doing so with a small fraction of the global funding that gets committed or talked about at events like Cop27.

IRDNC and other local organisations that helped achieve the remarkable successes I’ve described are ready to do even more. But there is a massive systemic flaw in the way conservation is currently financed which means accessing funding is an incredibly challenging hurdle for them to overcome.

Globally, IPLC organisations and communities receive less than 1% of all climate funding, while African organisations receive only 5% – 10% of the private philanthropic funding invested in Africa.

The system is set up to favour the biggest organisations and ignores the real needs of grassroots organisations like IRDNC. It refuses to take a little risk and support Africa’s visionary conservation groups and leaders, who want to see the people and places where they live thrive.

Cop27 should be working to bring about climate justice, which also means funding justice.

Wealthy nations should put money where their mouths are by directly and fairly funding the people and local organisations that are driving change and finding solutions to problems such as accessing clean water.

Omagano N. Shooya is a Portfolio Manager in Southern Africa for Maliasili, which supports local organisations in Africa with their conservation and climate work.