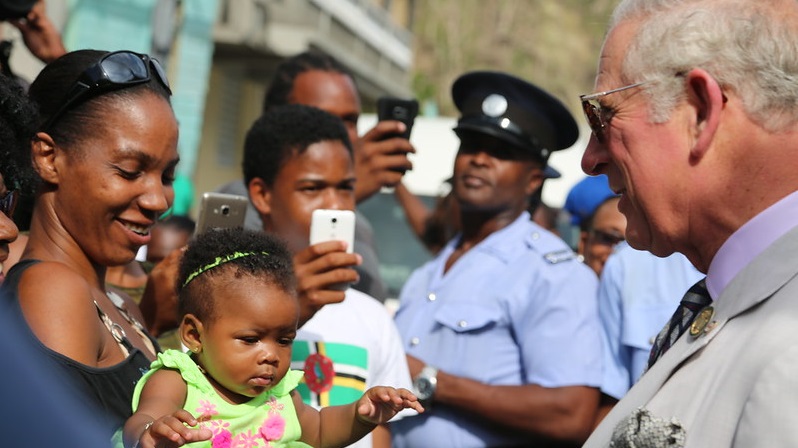 Prince Charles, now King Charles III of the UK, meeting people whose homes were destroyed by Hurricane Maria in Dominica in 2017 (Photo: DFID/Flickr)

Charles has been outspoken on environmental issues for more than 50 years and, unlike his mother, has lobbied politicians for his favoured environmental policies.

These have largely focused on nature conservation rather than clean technology or redistribution of resources. Another passion is promoting traditional British architecture.

British environmentalist Tony Juniper is a former adviser to Charles. He told Climate Home News: “I think he’s done pretty much more than anyone really to raise awareness and draw attention to what’s needed and, most importantly, to bring people together to think through the solutions… the depth of his knowledge and the breadth of his interests is really quite remarkable.”

Asked what motivates the king, Juniper said: “He is very focused on people… this is all about the wellbeing and the welfare of humankind, you know, the fact of him finding common cause with indigenous people in the rainforest, visiting flood victims in England, helping communities whose livelihood is threatened by the collapse of fish stocks.”

While Queen Elizabeth strictly avoided expressing views on political issues, the Guardian revealed in 2015 that Charles had lobbied UK government ministers on a range of issues including environmental concerns.

In 2005, he wrote to the then UK prime minister Tony Blair about the “enormous problem of climate change”, urging him to promote energy efficiency and adopt a stringent emissions trading system.

Around this time, Charles also lobbied for more subsidies for lamb, beef and dairy producers and told Blair there was an “undersupply of beef”. Beef, followed by lamb, is the most carbon-intensive form of protein.

Charles has also campaigned publicly on environmental issues. In 1970, he listened to his father Phillip tell the conference on world pollution in Strasbourg that they “need to act now on pollution before it’s too late”.

Ten days later, Charles himself warned, in a UK context, about overpopulation, plastic waste, oil pollution at sea and growing pollution from “gases pumped out by endless cars and aeroplanes”.

When climate change entered the agenda, Charles was an early and consistent advocate for action. He regularly gives keynote speeches at climate talks.

Climate consultant Nick Brooks told Climate Home that Charles could exert influence as head of state, despite the ceremonial nature of the monarchy.

“King Charles III might sway some quite conservative folks with well-crafted general messaging,” Brooks said. “Charles is nowhere near as popular as Elizabeth but those most resistant to climate messaging tend to be those who most prefer hierarchical systems and you don’t get much more hierarchical than the monarchy. Even King Charles waverers might get behind him now he’s got the job.”

Charles has a mixed record on green technology. The Sunday Times reported in 2005 that he had refused to allow wind turbines to be built on his properties, favouring a biomass plant to generate electricity from burning local trees.

He has promoted biofuels and his Aston Martin car runs on “surplus English white wine and whey”.