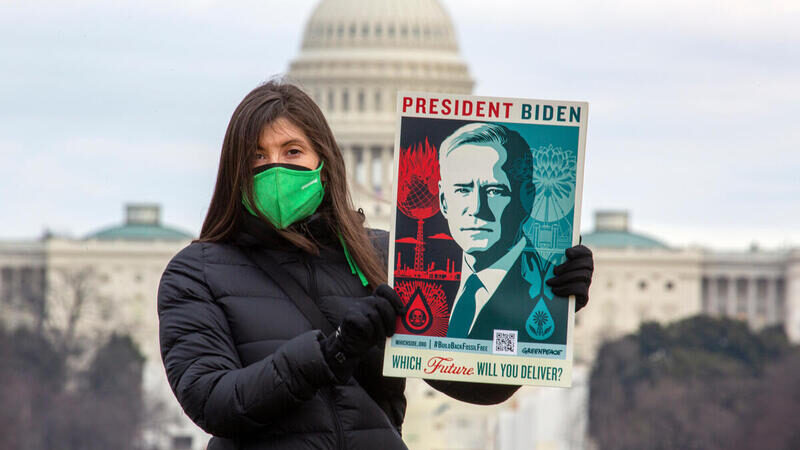 With just 10 days until Cop26 climate talks begin, the US has yet to pass its key climate legislation, putting the credibility of its targets in doubt.

Climate measures in president Joe Biden’s infrastructure bill and reconciliation bill are being scrapped or weakened by opposition from pro-fossil fuel senators in the Republican and Democratic parties.

Analysts told Climate Home News that such failure would weaken the US’s negotiating position at Cop26 and therefore the hopes for global ambition.

In particular, a measure that would reward US utilities for cleaning up their electricity generation looks likely to be scrapped.

Andrew Norton, director of the International Institute for Environment and Development (IIED) said: “If that doesn’t go through, it will be a major issue for the whole of the negotiations…it wouldn’t be the end game – but it would be a massive problem.”

In a press briefing, IIED chair of trustees Tara Shine added: “Any time there are promises made and broken we lose trust. Its more difficult for least developed countries and other climate vulnerable countries to think that the US can live up to other commitments if they see quite evidently that they’ve had these struggles.”

Biden was elected on a promise to take action on climate change and create well paid jobs in the process. Shortly after taking office, he submitted a pledge to the UN to cut US emissions 50-52% by 2030 from 2005 levels. He’s trying to deliver this through two linked bills.

For one of these bills, he needs 50 votes from his 50 Democratic Senators. But two, Joe Manchin and Kyrsten Sinema, are holding out on their support.

According to three sources cited by the New York Times, Manchin has told Biden that he strongly opposes the clean electricity performance plan (CEPP) element of the bill. The West Virginia senator has financial ties to the coal industry and his state utility is planning to invest over $400 million in keeping three coal power plants running until 2040.

The CEPP financially rewards utilities that reduce emissions from their electricity generation. It is an attempt to meet Biden’s target of a zero carbon electricity system by 2035. Currently, more than 60% of the US’s electricity is generated by fossil fuels.

Asked about CEPP, a Manchin spokesperson said he was concerned about “using taxpayer dollars to pay private companies to do things they’re already doing”.

E3G analyst Alden Meyer said this was “not a fair characterisation”. “It’s targeted incentives and designed to move them faster than they’re moving,” he said.

As a result of Manchin’s opposition, the New York Times reported last week that Biden’s team were rewriting the infrastructure bill without the CEPP.

The scrapping of the CEPP has angered many climate activists. Climate and energy professor Leah Stokes, of UC Santa Barbara, tweeted: “The CEPP is the most important part of the climate bill when it comes to cutting pollution. We need the CEPP to take on the climate crisis. It’s just that simple.”

It’s been almost a week since Manchin pulled the trigger on the CEPP. I’m still so appalled by the short-sightedness, the cynicism and the amount of self-delusion involved that I can’t read or focus on anything climate-related. I think I’m in some sort of shock?

Other campaigners were quicker to pivot to other options. The World Resources Institute’s director of government affairs Christina Deconcini told Climate Home News: “The CEPP is not the only tool needed to deliver on Biden’s reduction targets and that is what matters.”

She said there was lobbying under way to get another emissions reduction mechanism into the bill. “As an example, the tax credits in the bill are incredibly important in terms of emission reductions,” she said.

She added: “We are confident that reconciliation package will be enacted with significant climate provisions. What is uncertain is the timing. The legislative process can take some time.”

Greenpeace East Asia’s Li Shuo told Climate Home News: “Many people in China saw this coming for a long time. Climate targets proposed are not backed up by Congressional action. It’s like yesterday once more.”

“A few months ago,” Li Shuo said, “Americans said we need the infrastructure bills to get 50-52%. Now that the bills will not be smooth sailing, they started to say actually we don’t need the bills and can still get there – do we need to think hard to smell [a rat]?”

The speaker of the House of Representatives Nancy Pelosi is now aiming to pass the infrastructure bills by 31 October, the day Cop26 starts.

Several previous deadlines have been missed and Meyer said the bills were unlikely to pass by that date, although they may pass during the two weeks of Cop26.

Read more on: US US