In Davos, activists warn against climate inaction and greenwashing

As the world’s political and corporate leaders gather in Switzerland, activists and analysts are downbeat about the possibility of climate action 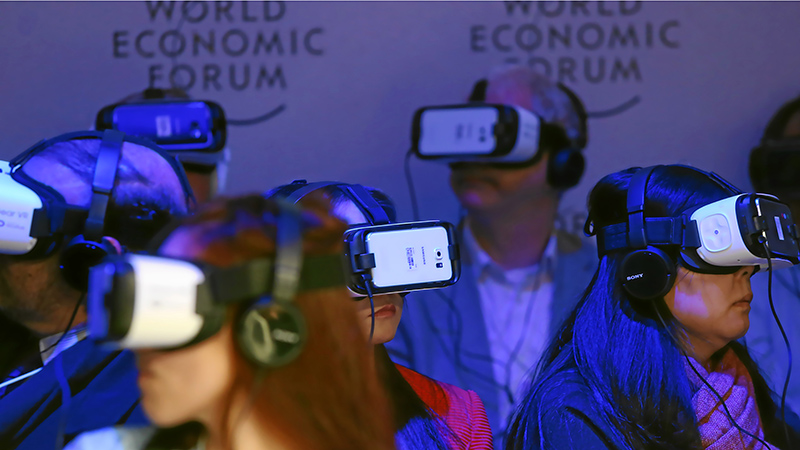 DAVOS/SWITZERLAND, 21JAN16 - View of the audience during the large-scale collective viewing of the virtual reality film 'Collisions' during the session 'Culture and the Fourth Industrial Revolution' at the Annual Meeting 2016 of the World Economic Forum in Davos, Switzerland, January 21, 2016. WORLD ECONOMIC FORUM/swiss-image.ch/Photo Michele Limina

By Valentina Romano for Euractiv

As oil and gas executives rub shoulders with government leaders in Davos this week, activists have raised concerns about the risk of greenwashing and further delays in climate action.

More than 50 heads of states, international organisations and business leaders are meeting in the Swiss Alpine resort of Davos this week for the 2023 meeting of the World Economic Forum.

The theme of this year’s conference is “Cooperation in a fragmented world”, a reference to the multiple crises and geopolitical tensions currently shaking the globe as Russia’s war in Ukraine enters its second year.

Discussions on the programme are heavily linked to climate change, but activists fear greenwashing will take centre stage as CEOs of oil and gas companies rub shoulders with global leaders.

“Davos is of course dominated by a wealthy group of people,” said Ugandan climate activist Vanessa Nakate who spoke to journalists on January 11.

“Oil and gas CEOs are invited into the forum to greenwash their businesses. It’s not hard to be cynical about the prospects for climate justice after spending a week there,” she added.

According to research published last week in the journal Science, US oil major ExxonMobil publicly downplayed climate change for decades, despite evidence from its own scientists who had made accurate predictions about global warming already since the late 1970s.

Campaigners including Nakate and Swedish climate activist Greta Thunberg will travel to Switzerland in the coming days to bring a “cease and desist” letter to oil and gas CEOs, demanding they stop any new oil and gas project.

“If you fail to act immediately, be advised that citizens around the world will consider taking any and all legal action to hold you accountable. And we will keep protesting in the streets in huge numbers,” says the letter, addressed to fossil fuel CEOs.

Activists will also ramp up pressure on rich nations to increase climate finance to developing countries. The past year has seen a “historic” agreement to establish a loss and damage fund at the Cop27 climate summit as well as the Bridgetown initiative which aims at reforming the global financial infrastructure to tackle climate change.

“These decisions show there is acceptance for the need for major financial support to vulnerable countries as the climate crisis worsens,” Nakate remarked, adding that, while the good intentions are there, the gap in climate finance is still major.

In the European Union, the commitment to decarbonise has been challenged by the energy crisis, leading to a greater reliance on fossil fuels to replace Russian gas.

For this reason, the upcoming Davos meeting will feature “double talking” and “mixed messages” by corporate executives, said Desiree Fixler, chair of the non-profit initiative VentureESG.

There will be “statements like: we’re still committed to net-zero but we have to manage this transition and take into account the accelerating cost of living, so we have to stay invested in fossil fuels,” Fixler said.

“I just don’t buy it,” she added, underlining that it is not possible to reconcile the commitment to net zero while at the same time investing in new fossil fuel projects.

The blame doesn’t lie only with corporate leaders though, according to Rachel Kyte, a British academic and dean of the Fletcher School at Tufts University.

Overall, Kyte said she wasn’t expecting anything meaningful to come out of Davos.

Climate change is the main long-term challenge facing the global economy but governments aren’t prepared to tackle it, the World Economic Forum said in its annual Global Risks Report published on January 11.

In the next two years, the ranking of global risks is dominated by the cost of living crisis. But looking at the next decade, climate action failure takes the top spot, with six environmental risks featuring in the top 10.

The lack of progress on climate action has exposed the divergence between what is scientifically necessary to achieve net-zero emissions and what is politically feasible, the study said.

The current cost-of-living crisis will cause resources from the public and private sectors to be diverted from climate efforts over the next two years, with a still undervalued role of natural ecosystems in the global economy.

“Nature loss and climate change are intrinsically interlinked – a failure in one sphere will cascade into the other,” the report reads. Without significant change, the interplay between global warming impacts, biodiversity loss, food security and natural resource consumption will accelerate, it warns.