The second part of our series on vulnerable communities finds BC taking radical action in the face of a pile up of fire threats. Can it move fast enough? 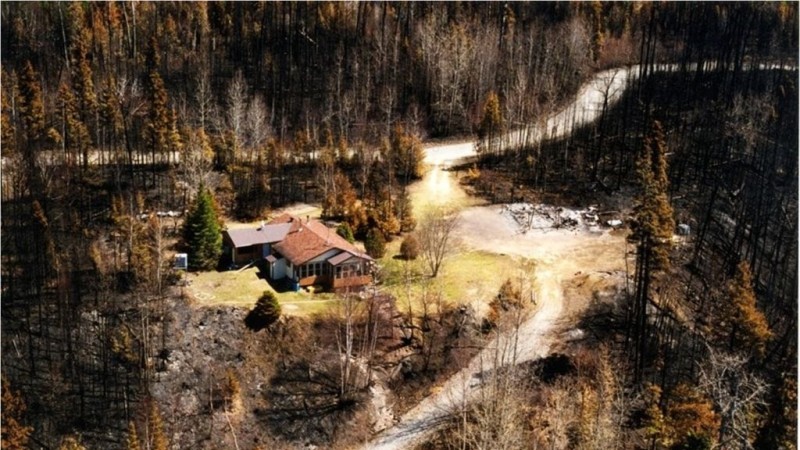 A house survives a 2012 fire in British Columbia. (Source: Prepared BC)

But the two share a less merry distinction – they are both sitting ducks for catastrophic fire.

The first article in this series found Tasmania’s capital Hobart facing the twin threats of climate change and a landscape overbrimming with fuel because traditional fire management by Aborigines had ceased with colonialism.

There are strong parallels in BC. As the climate warms, fires are predicted to become more severe, larger and occur more frequently in unusual times of the year.

The times call for bold ideas. Here, authorities are attempting to avert danger with a scheme so radical that one fire scientist in Tasmania calls it “crazy”, although not as crazy as living in a tinderbox.

“Almost every year for the last five years we’ve said: wow, this is the earliest start to a fire season in a long time or ever,” says Lori Daniels, a forest scientist at the University of British Columbia’s tree ring lab.

The coastal region in BC gets more rain than the interior. Even so, the capital Vancouver’s northern slopes, where Daniels lives, are desperately exposed once the perennial summer drought arrives. Here the city has made trouble for itself. The hills around the harbour were once lined by old wet forests. But those have been logged and replaced by more flammable woods.

“The forests that have grown back are very productive and are a really different structure and now we have more than a million people who live in the vicinity of those forests and are very active ignition sources,” said Daniels. In other words, Vancouverites have laid their bed and manage to set fire to it every chance they get.

To the east, behind the coastal mountain ranges, the densely populated forests of the interior pose an even greater threat to human life and property. A rain shadow leaves timbered communities behind the mountains sitting among the hottest and driest forests in Canada.

At the root of the problem in both Canada and Australia is the European colonists’ toxic relationship to the land.

Daniels says (as yet unpublished) analysis of burning patterns within trees reveals what can only be human-induced fire activity. Abnormal distributions of grasses also hint that the forest ecosystem evolved under a regime of regular burns. Much like Australian Aborigines, the original inhabitants of BC burned the forests in order to manage them.

Modern British Colombian townships nestle into the same forests, but they have changed in perilous ways.

Earlier this year, wildfire caused the evacuation of the Alberta town of Fort McMurray. Thousands lost their homes in the costliest disaster in Canadian history (C$3.58bn). But Daniels believes that the geography of British Colombia, with its steep hills and rain shadow cast by the coastal mountains, makes parts of that province even more fire prone than the boreal forests of Alberta.

A large fire burned much of Okanagan Mountain Provincial Park in British Columbia, in 2003. It burned into the city of Kelowna, where 239 homes were destroyed (Photo: Cate Eales/Flickr)

There are 356 communities in BC that have been assessed for fire vulnerability and 298 are considered to live under high or severe risk of catastrophic fire. Yet nearly half have never engaged with the province’s Strategic Wildfire Prevention Initiative (SWPI), which provides funding for fire planning and management. Of the communities who have made a plan, just half of them have actually acted on it.

The ski town of Whistler is a star performer. In summer, the mountains here become hot and dry and the million-dollar lodges sit amid a forest ready to explode. In order to protect these assets, the council has engaged in one of the most expensive and intensive fire management programmes anywhere on Earth.

The forest is thinned out, often by hand, and the understory is dragged away. Only some mature trees are left. This creates an open parkland – more closely resembling the forests that indigenous peoples would have known in the days of regular fire management.

The open forest creates a buffer zone between the woodland and homes. The lack of undergrowth stops fire from climbing into the canopy. It also gives firefighters critical advantages. With the fuel stripped from the understory, crews can fight the fire from places it would have previously been too dangerous to stand with a fire so close by. Water bombing is much more effective is the water actually hits the ground. That requires a thinned out canopy with less tress.

So far, 43,000 ha of forest has been thinned out across BC. The government believes three communities – West Kelowna, Alexis Creek and Barnhartvale – were spared disaster during the 2009 and 2010 fire seasons as a direct result of this work. It’s a vision that Tasmanian fire scientist David Bowman says all vulnerable communities should adopt if they insist on living beside fire-prone woods.

“[The] idea is crazy,” he says. “But living in a firebomb is not? We grafted a European city onto a wild place and we’ve half done it. We’re not going to take our cities and towns away. So we are just going to have to bite the bullet.”

But is it realistic? On the surface, the costs are astronomical. According to Forest Practices Board manager Tim Ryan, the average cost per hectare is $10,000. In communities such as Whistler, says Daniels, where residents have insisted on a careful, aesthetically-sensitive approach, the cost is more than twice that.

Imagine then, the task of securing all of BC, where 685,000 ha of forest borders communities at high risk. If you include communities at moderate risk, the number approaches one million hectares. Even if the rudest, cheapest approach is taken, the cost would approach $10bn.

“Between 2004 and 2015, $78m was contributed in the province of BC towards this preventative fire management,” says Daniels. The gap seems unbridgeable. Until you consider the costs of not doing it.

In 2003, thirty-three thousand people had to be evacuated from BC’s third city of Kelowna as a wall of fire descended from the hills. The province’s worst fire destroyed more than 230 homes. In that year, the province’s fire fighting bill alone was $750m.

“That’s ten times what we spent over the subsequent decade trying to prevent another $750m year,” says Daniels.

The bill mounts when the disastrous and potentially avoidable damage to homes, communities and the local economy are factored in. The BC government says the net benefit of treatment is more than $7,000 per hectare.

That is before they account for the enormous health costs and impacts on the environment that are the result of large wildfires. The science of estimating these costs is imprecise, but for a guide, one study in 2006 found smoke exposure from a single day of a fire near the city of Edmonton cost the city between $1m and $5m.

“When you start lining up all the actual costs, it justifies spending the money to actually act and try to reduce these fuels that cause such tremendous fires,” says Daniels.

Just like the human response to climate change, which is driving fires towards Canadian homes, prevention is less costly and painful than reparation. But even in wealthy former colonies, the lure of deferred payment is proving a powerful demotivation.

The last in our series, to be run on Wednesday, will look at the Mediterranean, where an ancient landscape is being transformed by modern economics, sending fire into communities that have worked the land for centuries.