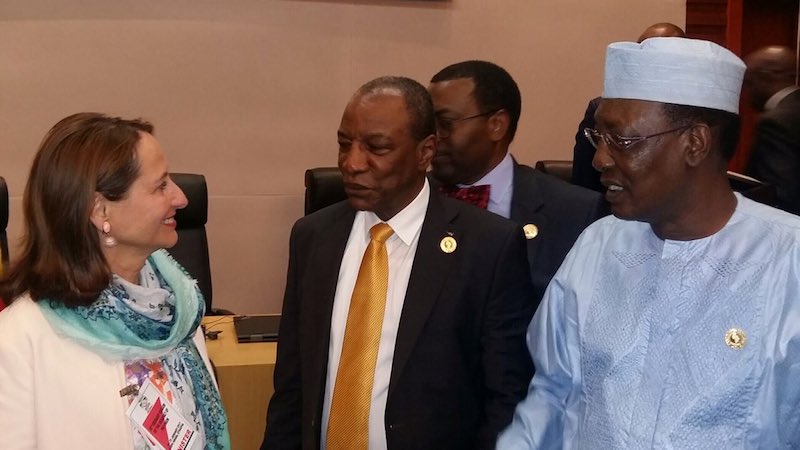 French environment minister Ségolène Royal has announced a replacement official to lead an African renewable energy scheme that is embroiled in a row over European interference.

In April, Climate Home revealed Sokona had quit following a board meeting in Guinean capital Conakry the previous month.

In a withering resignation letter obtained by this website, Sokona said a list of 19 initial projects had been forced through the board by Royal and the office of European commissioner for international development Neven Mimica. This showed, wrote Sokona, “evident contempt for, and abandonment of, the AREI principles”, which place primacy on African leadership and independence.

She said he had told the board he was resigning because of his commitments to a second job. Sokona holds several academic and advisory roles, notably including vice chairmanship of the Intergovernmental Panel on Climate Change (IPCC).

“The board asked him to continue and he said himself that he has another job more interesting for him and so that he couldn’t continue,” said Royal. “And we respect his decision.”

Sokona’s accusation that the 19 projects had been approved at the behest of France and the EU was disrespectful of the African heads of state who sit on the board, she added.

Sokona declined to comment on Royal’s version of events. But his resignation letter described the meeting in Conakry very differently. “I clearly realised that the underlying agenda was to officially endorse what the European partners had already decided for AREI,” he said.

Without the safeguard of African oversight, he worried the AREI would become a repackaging exercise for already approved projects, rather than a catalyst for new development.

“I now see this sequencing of events as a meticulous strategy by the EU, or some within it, to dismantle AREI as we know it,” he wrote.

Royal denied this. “All the projects, the 19 projects, are in the list of 250 projects given by Africans. It’s not the project of France,” she said. “I am not France in the board. I am in the board as president of COP21 looking after the implementation and realisation of the promises made during COP21.”

Minutes from the AREI’s first board meeting list Royal as representing the government of France, saying she joined “at the invitation” of Guinean president Alpha Condé, who heads the board. Minutes from the fractious second meeting in Conakry have not been published.

COP21 was the historic climate conference in 2015 that produced the Paris climate agreement. It was at that meeting the AREI was launched as an “African-led” programme that would see $10bn invested by developed countries in the continent’s clean energy development.

“The Europeans must own up to their role in this mess and must stop trying to deflect the blame,” said Mohamed Adow of Christian Aid. “They must put their money where their mouths are and genuinely support the initiative’s African leadership. Now, with the recent nomination of a new director, they really need to learn their lesson and avoid repeating the same mistakes.”

As head of the Africa Group at climate talks, Nafo has connections with heads of state across the continent and has been involved in the initiative since its early planning.

Royal said she had endorsed Nafo and that he would be officially appointed at the next meeting of the board at the beginning of July.

“All the members of the board received a letter from Alpha Condé who proposed him and I said ‘of course, he’s very good’,” said Royal.

Speaking to Climate Home in Bonn, Nafo said Royal must have more information than he did. “The president [Condé] might have proposed my name,” he conceded.

Asked why he thought Sokona had resigned, Nafo said: “You need to ask him.” But earlier in the Bonn meeting, Nafo publicly criticised Sokona and African NGOs for suggesting that the African heads of state on the AREI board acted under EU influence.

“I don’t think those two are anybody’s puppet,” he said, referring to Condé and Idriss Déby, the president of Chad.

Augustine Njamnshi, from the Pan African Climate Justice Alliance, said Nafo’s success would depend on whether “he will be allowed to defend African interests”.

A coalition of NGOs met both with Royal and European officials in Bonn in the past week. Njamnshi said from these meetings, “it is very clear that these projects came from the EU”.

Njamnshi said the board had failed to open up its processes to scrutiny from civil society. Royal accepted the criticism, citing a sense of urgency to approve an initial tranche of projects.

“They are right because we didn’t have time enough to make transparency, we have nothing to hide. We have to make more transparency this is true,” said Royal, adding that she had proposed to set up a technical committee with Nafo that would allow NGOs to assess projects and propose their own.