G7 split as leaders issue climate statement without US

US would not join other G7 leaders in support of climate action. President Donald Trump promised to make his decision on the Paris accord “next week” 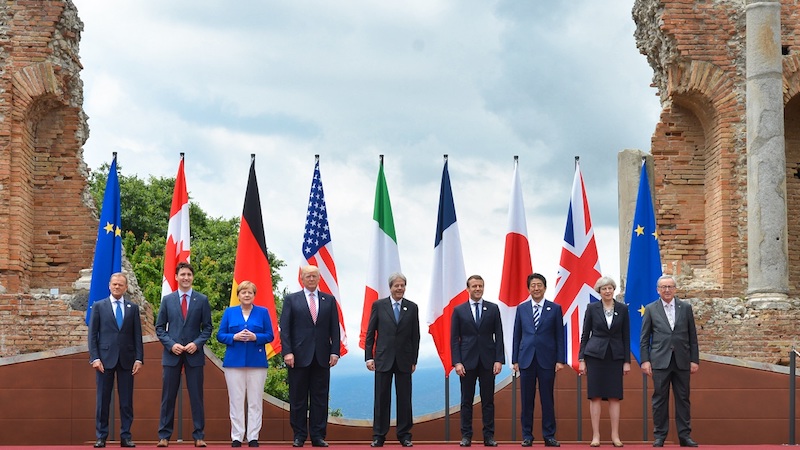 Leaders from the G7 and EU met on Friday and Saturday in Sicily, Italy (Photo: G7Italy)

US president Donald Trump will decide whether or not to withdraw from the Paris climate agreement within a week, he said at the closing of a meeting with G7 leaders in Italy.

“I will make my final decision on the Paris Accord next week!” said Trump on Twitter, a few minutes before a leaders communiqué was released in which the six other heads of state and the EU unanimously backed climate action, but a special clause had to be inserted to allow the US to demur.

I will make my final decision on the Paris Accord next week!

Instead of a consensus statement, the document noted the US was still considering its position on the accord, while other leaders reaffirmed their intention to meet their commitments to the deal.

The 97-word passage on climate from Taormina contrasts starkly with two pages devoted to the issue at last year’s meeting in Japan, although the leaders of Canada, France, Germany, Italy, Japan, the UK and the EU all noted the commitments they made the year before.

“President Trump will take time to reflect on it, and the other countries are taking note of that,” said the summit’s host, Italian prime minister Paolo Gentiloni according to Bloomberg.

The length of overall statement fell from 32 pages in 2016 to just six this year.

In 2015, German chancellor Angela Merkel convinced other leaders to pledge full decarbonisation of their economies – effectively ending fossil fuel use – by the end of the century. Decarbonisation of the global economy was not mentioned in this year’s document.

A similar pledge made two years ago to end fossil fuel subsidies, and reiterated in Japan, was also dropped.

Leaders had had a “controversial” debate on climate change on Friday, Merkel told reporters. But ultimately, the other leaders could not convince Trump to join them on the issue.

“He didn’t want to do anything to put the US at a disadvantage,” said Gay Cohn, Trump’s special economic advisor. Trump and various acolytes have said that the Paris deal was unfair to the US and threatened its economic growth and jobs.

Climate change had not been discussed by the ‘sherpas’, who lead country negotiating teams and try to pre-agree all but the most controversial matters, before the meeting. As a result, the final text was left entirely to leaders to discuss.

The US had reportedly pushed for a reference to ‘clean coal’ technology to be included in the text. The final text did include a passage on the “significant economic opportunities, in terms of growth and job creation, offered by the transformation of the energy sector and clean technology”, which Trump did agree to.

This vaguely-worded passage could be interpreted as both an affirmation of the job creating potential of renewable energy, or the promise of carbon-capture and storage to allow coal generation to continue.

Trump has repeatedly failed to meet deadlines for a decision on the Paris accord that have been set in statements by White House spokespeople, but Trump’s tweet is the first time he has said that he intends to end the uncertainty.

Alden Meyer, director of strategy and policy at the Union of Concerned Scientists, said Trump’s “waffling” over the Paris deal had left him “in stark isolation”.

“The leaders from Europe, Canada, and Japan have made it crystal clear they intend to fully implement their national commitments under the Paris agreement and pursue efforts to decarbonise the global economy,” said Meyer.

David Waskow, head of the World Resources Institute’s climate programme told Climate Home that it was the first time the US had stood apart from the consensus position on climate at the G7.

“The G6 stood strong and made clear their determination to implement Paris,” he said. “The reference to last year’s communiqué is important… Now it’s time for Trump to make the right decision.”