Matt Canavan, who has strongly backed Adani’s Queensland mega-mine, is third senator in recent weeks to be caught out by dual citizenship rule 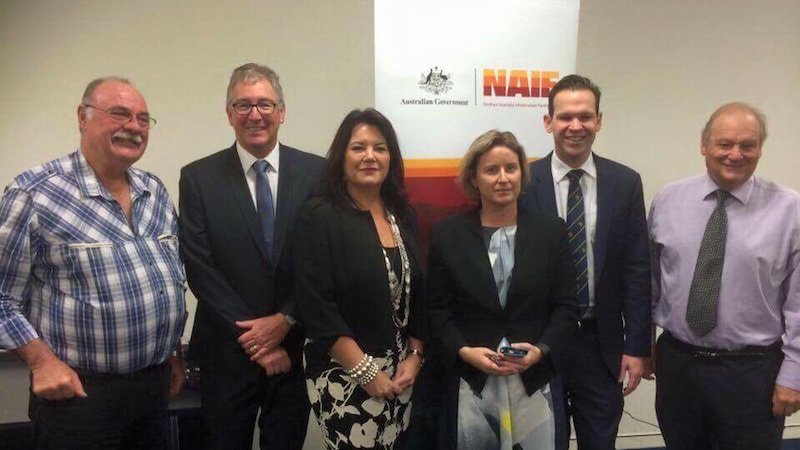 Former resources minister Matthew Canavan (2nd from right) with board members at launch of the Northern Australia Infrastructure Facility in August 2016, the body considering a $1bn taxpayer loan to Adani's mine (Photo: Dept of Industry)

The Australian government’s greatest champion of the Carmichael coal mine has quit cabinet after finding out his mother registered him for Italian citizenship.

Matt Canavan said on Tuesday that his mother had made an application for Italian citizenship on his behalf without his knowledge in 2006. Italian authorities confirmed to him that he was indeed an Italian citizen.

Canavan has been the government’s most vociferous advocate for the Carmichael mine proposed for Queensland, which will be run by Indian company Adani.

Last week he told a panel show on ABC that the mine, which has applied for almost $1bn in federal loans and will set loose more annual carbon emissions than New York, should go ahead because the coal would be burned overseas and therefore would not affect Australia’s carbon emissions.

In April, he called one of Australia’s largest private banks, Westpac, ‘wimps’ for not standing up to environmental activists and changing their lending policy to rule out loans to the Adani mine.

The two Greens senators, Larissa Waters and Scott Ludlam, quit the senate last week. But Canavan said he had no intention of resigning his seat because initial legal advice to the government suggested he had not breached the law as he had not known about his status. He did, however, quit the cabinet.

“According to the Italian government I am a citizen of Italy. I was not born in Italy, I’ve not been to Italy and to my knowledge I’ve never set foot in an Italian consulate or embassy. Until last week, I had no suspicion that I could possibly be an Italian citizen,” said Canavan.

The matter will now be referred to the high court to decide whether he can remain in the senate.

Greens leader Richard Di Natale said on Wednesday that Canavan’s case was no different to Waters and Ludlum and he should resign. “The advice we received was that ignorance is no excuse,” Di Natale was reported as saying by the Guardian.

Senator @mattjcan & I disagree on almost everything, especially #Adani, but my heart goes out to him, family & staff with dual citizen news