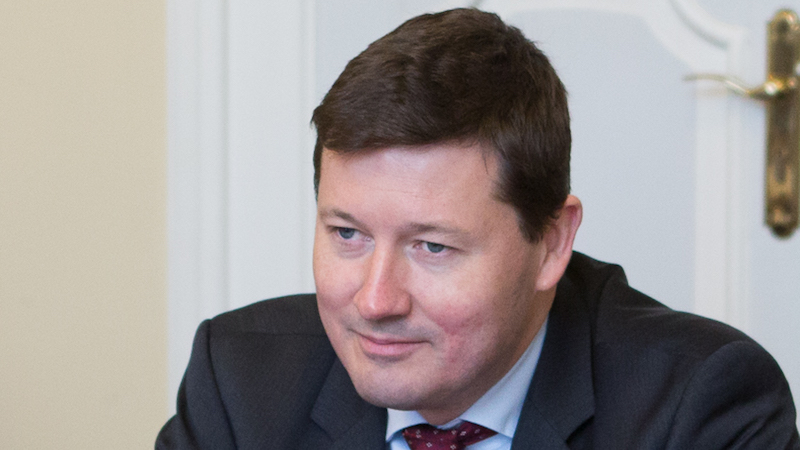 The European Commission president's chief of staff Martin Selmayr is known by various nicknames in Brussels, including 'monster' and 'Rasputin' (Photo: Saeima)

Jean Claude Juncker’s chief of staff instructed EU commissioners to remove potential sanctions on automakers who fail to reach electric car targets, according to sources, even though documents seen by Climate Home News show VW has lobbied for comparable measures.

Martin Selmayr, a German lawyer and one of commission president Juncker’s closest advisors, sent out the order last Thursday following a meeting with Matthias Wissman, the head of the powerful German auto-manufacturers lobby, the VDA, two EU sources confirmed.

On top of reducing the electric vehicles mandate – due to be proposed on November 8 – to a voluntary scheme, Selmayr, the powerful official dubbed ‘Rasputin’ and ‘monster’ by UK Brexiteers, also demanded that a 2025 target for vehicle emissions reductions be scrapped.

Selmayr denied he had made the intervention. “This is not true. Obviously invented,” he told Climate Home News.

Commission spokeswoman Mina Andreeva would neither confirm nor deny that Selmayr had sent out an instruction to commissioners. But she said that Selmayr had referred Wissman on to the climate commissioner, Miguel Arias Cañete, after receiving a phone call from him last Thursday. The lobbyist and Cañete then spoke the following day, Andreeva said.

The energy commissioner’s press team said: “During the call, Mr Wissman outlined VDA’s position on the upcoming proposal on CO2 standards for cars and vans. The commissioner explained the rationale behind the preparation of the draft proposal and did not comment on the content of any of the proposals that will be part of the package.”

The day before he spoke to Selmayr, Wissman and Gunther Oettinger, the German vice president of the commission, made a joint plea for there to be no electric car quotas in the EU proposal.

The German chancellor Angela Merkel is currently locked in coalition talks with the Greens, who favour strong CO2 regulation for automobiles and the pro-business Free Democrats, who do not.

The resulting stasis has led the auto industry to use its Brussels contacts to tip the balance of power, according to Greg Archer, T&E’s clean vehicles director.

“Having failed to gain support from the German Government the VDA has run to their German friends in the commission to emasculate the commission’s proposal for future car CO2 regulations,” he said. “This is blindingly shortsighted and unnecessary.”

While no announcement on a final decision is expected before November 8, during the Cop23 climate summit, sources say that the issue is being debated by key commissioners today.

One EU official told Climate Home News that despite Selmayr’s intervention, the inclusion of sanctions with the CO2 in cars proposal was strongly backed by several commissioners. “It is not finished,” he said. “We are still discussing it internally.”

In its present form, the draft blueprint would reportedly use carbon offsetting to reward or punish carmakers’ efforts to meet a 15-20% target for zero-emitting vehicles by 2030, with a possible additional target of 10% for plug in electric hybrids.

An overarching 25-30% emissions reductions goal for cars in 2030 – and 30-40% for vans – has also been pencilled in to deliver a big chunk of the bloc’s 40% emissions cut, pledged under the Paris agreement.

“We’re trying to give a signal that the decarbonisation of transport needs zero-emitting vehicles (ZEVs) and we don’t want them all to be Chinese, American or Asian,” an EU source said. “Europe’s industry can manufacture them too.”

“That’s why we need a signal from a benchmarking system beyond CO2 targets that tells industry how many batteries we need, and local authorities how much infrastructure for charging we need,” said the source.

The draft measure was opposed by the influential European Automobile Manufacturers Association (Acea), which pushed for lower goals and less ambitious conditions on any ZEV mandate.

But the industry bigwigs may have been lobbying for a more regressive position than their own members advocate. A VW lobby presentation seen by Climate Home News shows that the firm could accept a ZEV mandate of 22% in 2025, rising to 34.5% in 2030 under certain conditions.

Archer said: “As the VW leak shows carmakers can accept a ZEV mandate and targets more ambitious than the commission is proposing. But some European carmakers are fixated on preserving the market for dirty diesel in Europe for as long as possible, despite collapsing sales, in a desperate attempt to recoup their past unwise investments.”

If the commission’s proposal is lost as a result of the last minute manouevring, attention will switch to the European parliament, where MEPs could reinject some of its original ambition.