India and France are leading a push to roll out solar power, with an event next month to focus on water pumps, affordable finance and mini-grids 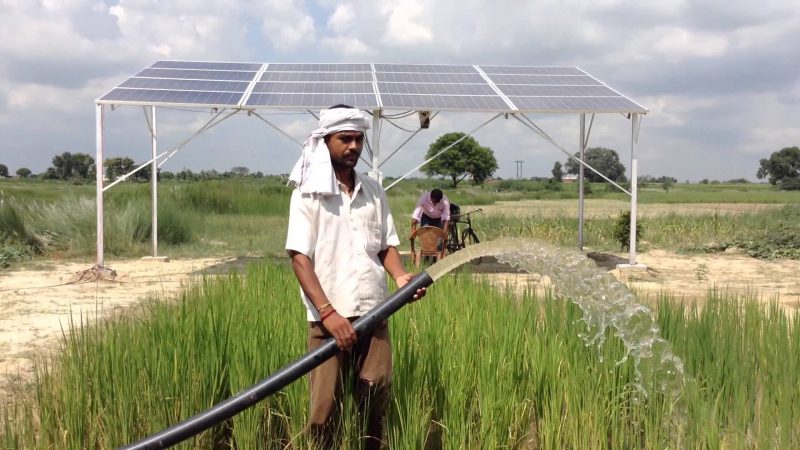 Solar water pumps are one of three focus areas for the International Solar Alliance (Pic: YouTube/A.G.E.S)

As India gears up to host the first International Solar Alliance (ISA) summit next month, efforts are underway to provide a momentum to solar deployments in over 120 sunshine countries.

ISA, a brainchild of India and France launched at the Paris climate summit in 2015 with the aim to efficiently exploit solar energy in the countries that lie between the tropics, expects to ink a host country agreement just ahead of the big day. The agreement is to be signed between the ISA and India, the latter being the nation that is home to its headquarters and is leading the intergovernmental coalition to kick-start solar projects globally.

The agreement that India is hoping will be sealed by March 9 will provide operational autonomy to the host country for basic functioning like recruitments, signing contracts and issuing of tenders, which are crucial for the implementation of solar programmes that are to be undertaken under the ISA.

The one-day ISA summit that will be held on March 11 at the President house in the capital city of Delhi will be an important one, given that it will be the first summit for the ISA since it became a legal entity In December last year following ratification by more than 15 countries.

Two new programmes — on scaling solar E-mobility and storage, and on rooftop solar — are expected to be unveiled at the summit that will see a presence of heads of over 50 member countries including France and India, who had jointly launched the sunshine coalition at the 2015 climate summit in Paris.

It is also expected that 121 solar projects — the number representing the number of member countries in the alliance — will get a green signal at the summit. The final list of the 121 projects is yet to be released. The upcoming ISA summit was to be held in December last year but was postponed at the last minute due to Gujarat state elections.

The ISA is the first treaty-based intergovernmental organization to be based in India that aims to help sunshine-rich developing countries tap solar energy at more affordable prices through aggregating both demand and risks in order to bring down costs and secure investments of solar developers.

The coalition has already launched three programmes. The first one, called scaling solar applications for agricultural use, aims to promote solar water pumps instead of diesel pumps for irrigation to benefit both farmers and the environment. The second programme focuses on scaling up affordable financing for solar while the third aims to promote solar mini-grids, especially in the least developed and small island countries.

Talking about how ISA is generating demand for solar during a discussion at the World Sustainable Development Summit that was organized by the Energy and Resources Institute (TERI) between February 15-17, Upendra Tripathy, Interim Director General of ISA, said, “We have aggregated demand of 500,000 solar water pumps and we are aggregating risks as well for going for a global tender. For example, Bangladesh has said they need 50,000 pumps every year and India has said it needs 100,000 pumps in the next three years. Similarly, we are putting together demand from Mauritius and Uganda as well. We are mobilizing 500,000 pumps, and with the global tender, prices will come down. Industries are the best stakeholders that can bring this sort of change in the fields.”

Calling the first programme as a win-win situation both for the farmers and the environment, Tripathy said, “In India, we have 7.5 million diesel pumps. In ISA countries, we are trying to do a census of how many diesel pumps are used. Also, when a farmer installs a pump, he needs to erect five poles just to supply electricity to it which cost INR 2.5 lakh (USD 3,880).”

However, there are challenges when it comes to the mega solar irrigation pump initiative, which according to the officials is moving along with full force.

“We have been able to mobilize demand of 464,000 pumps out of 500,000. But this is just the demand. The countries are only saying that we need so many pumps. When we now talk to the industries, they say we need a commitment from them to buy. When we talked to Uganda, for example, Uganda said that the federal government has given the commitment but the buying has to be done by the local government. And there is a provincial government too in the middle,” Tripathy told indiaclimatedialogue.net.

“Now we have to see if we can tender it without buying. But if we do it without the commitment of buying, then the manufacturer would say that look this means nothing. Look, no one says that we would like to tender but we won’t buy,” he said. “So we are trying to organize finances for the 500,000 pumps and give a reasonable certainty that this will be purchased by the sovereign countries, but we can’t give a commitment at the moment. So the prices won’t come down as much when there is a guarantee of buying but at least we have created an ecosystem where these pumps can be utilized.”

As for the initiative of solar mini-grids, the programme has not picked up pace in comparison to solar water pumps.

“We have in fact asked Indian industries how much they can put in Africa, something has happened but we have to go to a global scale in that,” Tripathy told indiaclimatedialogue.net. “We are focusing on small island countries like Fiji, but like the first programme (solar water pumps), each country has not given their demand because they are yet to get a clarity on mini-grids, so we have to bring a lot of awareness, capacity building and quality control. Only then the demand will be created.”

In order to address the issues of awareness, quality control and local capacity building, ISA will also be setting up Solar Technology Application Research Centres in select countries and an infopedia. Financial challenges and making solar projects more affordable are the main areas that ISA is working on.

“The European Union is coming up with some financial assistance of 370,000 euros to clear the infopedia, which will help in our mission. The World Bank has put USD 500,000 for awareness and other activities and then of course there is a corpus fund that we are trying to create to address how to run ISA when India will stop funding after the fifth year of its inception,” said Tripathy. “India has already raised USD 18 million for the corpus. The Green Climate Fund has given us the possibility of using funds, which will attract more funds in future. And there is an interest in companies. A Chinese company has come forward with USD 1 million. This really became a hot story considering China is not a member of ISA yet.”

Officials at the ISA are hoping that the upcoming summit will bring the required political support to implement national solar roadmaps for each member country.

This article was produced by India Climate Dialogue