Patricia Espinosa backed Polish government nominee Michał Kurtyka to preside over Katowice talks, despite a bid by Jan Szyszko to keep the role 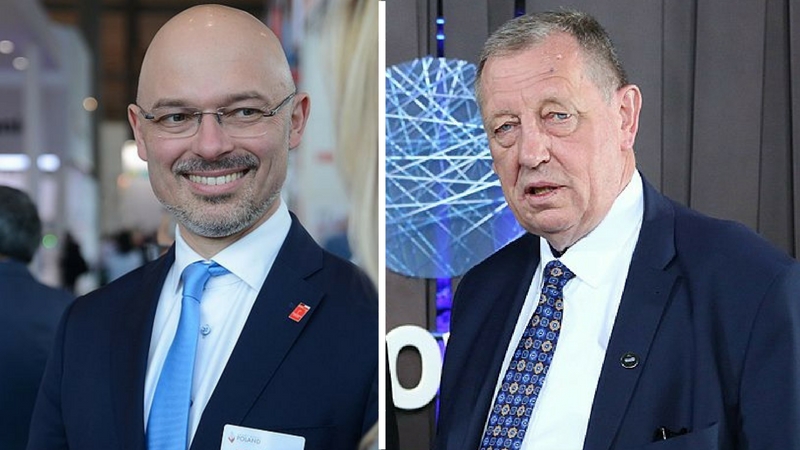 Michal Kurtyka (l) is the Polish government's choice to lead the next round of UN climate talks; Jan Szyszko (r) said the job should be his (Photos: Ministerstwo Energii; Annika Haas/EU2017EE)

Sign up for our Bonn morning briefing, all the news, tips and rumours from inside the first talks of a critical year.

Michał Kurtyka will be president of COP24, despite a claim from former environment minister Jan Szyszko the role was rightfully his.

That was confirmed by UN climate chief Patricia Espinosa at a press conference on Wednesday, in response to a question from Climate Home News.

On the sidelines of interim negotiations in Bonn, Espinosa said she had received official notification from Poland’s ministry of foreign affairs of their choice to lead the critical December summit in Katowice. “What we are facing now is the usual scenario is Michał Kurtyka will be elected on the first day of COP24.”

Poland will take over the presidency from Fiji in Katowice. The Polish premiership announced Kurtyka’s appointment on Friday. The deputy energy minister then met Espinosa in Bonn on Sunday.

But Szyszko issued a statement disputing the legality of the decision. He had been lined up as president while still a member of government at the last UN climate summit in November.

Szyszko argued the Eastern European bloc nominated him personally, not the institution he represented – and it was a breach of UN rules for the Polish government to choose someone else without consultation.

While not engaging with Szyszko’s technical argument, Espinosa effectively quashed his claim on the title.

The UN climate secretariat told CHN on Tuesday that it would seek legal advice on Szyszko’s claim. The results of that advice have not been shared.

Marcin Korolec, another Polish former minister and president of the 2013 UN climate summit, was scathing about Szyszko’s last-ditch bid to retain the post.

“Minister Szyszko walks along the UN corridors and claims that he is the one who runs the COP in Katowice. He owns it, or what?” Korolec said in a tweet, which was later deleted.

COP19 president and fmr environment minister of Poland: “Minister Szyszko walks along the UN corridors and claims that he is the one who runs the COP in Katowice. He owns it, or what?” This tweet was deleted. What’s this all about? Read more here: https://t.co/ATcSjh3Vjw pic.twitter.com/Jh0qIksi9E

Krzysztof Bolesta, head of research at the PolitykaInsight think tank and a former advisor to Korolec, tweeted: “In my opinion, it is causing a lot of embarrassment.”

Poland’s energy ministry did not respond to an emailed request for comment.