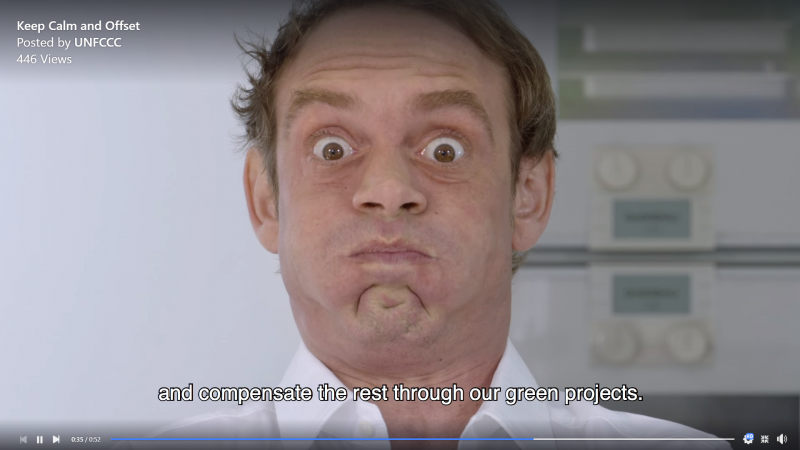 Viewers complained the advert for its Climate Neutral Now scheme appeared to mock green lifestyle choices and downplay the urgency of the climate challenge.

Published on Facebook and Twitter, the video struck a jokey tone, showing a man trying to give up his car, flights, steak and even breathing to cut his carbon footprint.

“OK, we know that’s slightly impractical, so here’s the real solution,” said the narrator, directing viewers to a revamped website where they can pay to cancel emission reduction credits issued through the Clean Development Mechanism (CDM).

Cancelling your holidays, selling your car, taking cold showers? Stop breathing, even? There are easier ways to take #climateaction: visit our website to calculate your emissions, reduce & offset them, and …. breathe easy! https://t.co/naUkZguz49 #climattitude pic.twitter.com/ZqdzHH4rsg

Carbon Market Watch reacted with shock. The Brussels-based NGO is preparing to launch a campaign to end the CDM, citing concerns about its environmental integrity.

The UN is promoting “junk credits,” said policy director Femke de Jong. “For me [the video] sends the message that they are not being very serious about the urgency of climate change.”

Jesse Bragg of Corporate Accountability agreed. “Is this really the message the UNFCCC should be sending? We need people and governments taking urgent action that actually leads to emission reductions and keeps fossil fuels in the ground, not buying themselves out of it and proliferating the climate crisis.”

Offset programmes were ineffective “money-making schemes”, said Bragg, adding it was “completely inappropriate” for the UN to promote them.

On Thursday afternoon, a spokesperson for UN Climate Change issued the following statement:

“We understand and respect the concerns that have been raised with regard to the recent video on UNFCCC website to support the re-launched online Platform for Voluntary Cancellation of Certified Emission Reductions (CERs), where all stakeholders can measure their emissions and offset those which cannot be avoided.

Arthur Rolle, chair of the CDM executive board, said in a press release on Wednesday that 300,000 tonnes worth of carbon credits had been cancelled in 2,500 transactions since the Climate Neutral Now platform was launched in 2015.

“I hope that this upgrade will motivate even more users, individuals and businesses to take the climate action we urgently need. And we hope to become an even more attractive partner for peer organizations and initiatives who also promote urgent climate action and who wish to collaborate with us,” he said.

Established under the Kyoto Protocol, the CDM allowed rich countries to meet some of their emission reduction obligations by funding projects in the developing world. As the global context changed, it became reliant on the voluntary market: businesses and individuals choosing to offset their emissions. They can boost the market by cancelling credits generated by existing projects.

The CDM has been dogged by reports of fraud and perverse incentives. Multiple reports have questioned whether its projects are truly “additional” or would have happened anyway. A 2016 study commissioned by the EU found “fundamental flaws” in the scheme, saying only 7% of credits had generated “real, measurable and additional” emission reductions.

The UN ad encouraged viewers to reduce their emissions “as much as you can” before offsetting their remaining carbon footprint. But viewers perceived the video as mocking climate-friendly lifestyle choices, describing it in twitter comments as “shameful” and “bizarre”.

Shameful video. Some at #UNFCCC should pay more attention to the message that will come out of the IPCC in October – particularly in relation to the role that lifestyle choices that lower energy demand can play to achieve the #1o5c goal. Please take this video down ASAP

Bizarre. Would work well as satire, not as a serious commercial. Did @UNFCCC really produce this themselves?

Carbon offsetting may be part of the solution, but it’s surely no magic wand but a gamble. Framing it like this, mocking necessary lifestyle changes, is very unhelpful.

Why are you trying to discourage people from doing actually effective things like driving less and not eating meat?

This article was updated on 30/08/2018 to reflect that the video had been taken down, and later to incorporate a statement from UN Climate Change.