School striker Noga Levy-Rapoport urged the International Maritime Organization to set speed limits at sea, for the sake of young and future generations 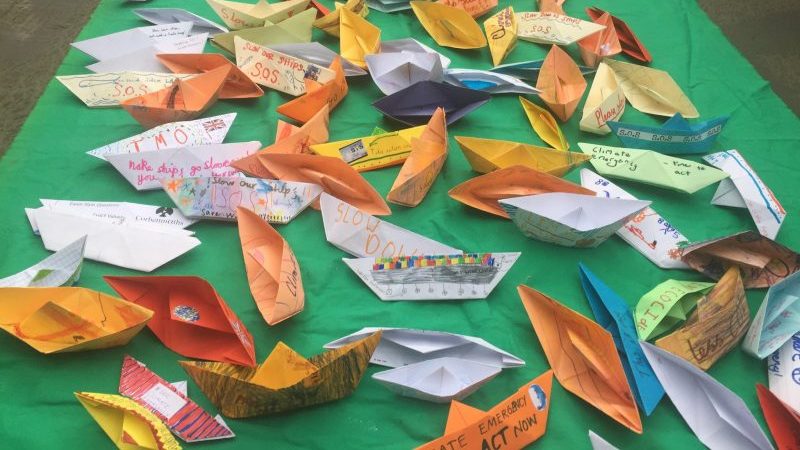 Schoolchildren urged the shipping industry to speed up climate action by slowing down, as talks on how to curb emissions started at the International Maritime Organization on Tuesday.

After striking a climate deal last year, national representatives at the IMO are considering short-term measures to put it into practice, including speed limits at sea.

Noga Levy-Rapoport, 17, addressed delegates on behalf of the UK Student Climate Network, telling them there was no time to waste.

“What have you got to show for twenty years of talk? A weak new ship design standard and a decarbonisation objective that’s not ambitious enough,” she said. “Don’t fail your children because you refused to change.”

Under its 2018 climate pact, the IMO has committed to cutting the carbon intensity of shipping 40% by 2030 and halving the sector’s carbon footprint by 2050.

However it is not due to finalise the strategy for meeting those targets until 2023. A handful of countries including France are promoting speed limits as the best way to start cutting emissions sooner.

European neighbours Denmark, Germany and Spain are arguing for a less prescriptive approach to improve operating efficiency, while developing countries such as Brazil, Saudi Arabia and Chile have raised concerns about the economic impact of potential regulations.

Levy-Rapoport, who is active in the school strike movement, told Climate Home News she was not familiar with shipping before green NGOs invited her to speak. She researched it and found out the sector has a carbon footprint the size of Germany or Japan.

“I spoke about the necessity for urgent climate action for an industry that is so, so important and plays a large role in global emissions,” she said. “I do hope they [IMO delegates] listened.”

Specifically, she argued the IMO should cut ship speeds at least 10% and aim for more.

77 origami ships ready to sail 🚢 to the International Maritime Organisation via @campaigncc. They carry a message from Corbridge Middle School pupils that the IMO should slow down ships to #CutEmissions because there is a #ClimateEmergency. #ShippingSOS @EcoSchools @LizVFisher pic.twitter.com/0UWjCoZYrC

I’m at the International Maritime Organisation for the start of the #shipping #climate negotiations a d the room has been flooded with a fleet of ships made by children from around the world. Message is clear: act now! #climateemergency pic.twitter.com/R1At8unokc

Fair play to @IMOHQ security. He enjoyed the #SirensTroupe perfomance for slow speed outside International Maritime Organization #IMO at the start of #MEPC negotiations. Asked us to come back every day! pic.twitter.com/19VkJAKjEB

Meanwhile, the UK-based Campaign against Climate Change delivered origami boats carrying climate messages from schoolchildren to the desks of negotiators.

Outside the venue, activists dressed as traffic wardens showed their support for a go-slow at sea.

At a conference on protection of the maritime environment at the weekend, Catholic groups from key shipping nations announced plans to divest from fossil fuels.

These included the Archdiocese of Panama and Caritas Philippines. Panama is home to the world’s largest shipping registry and the strategically important Panama Canal, making it an influential player at the IMO. Around a quarter of seafarers come from the Philippines.

Climate change has hit home in Panama lately. The worst drought on record forced the canal operators to impose draft limits, meaning ships had to offload some cargo to pass through.