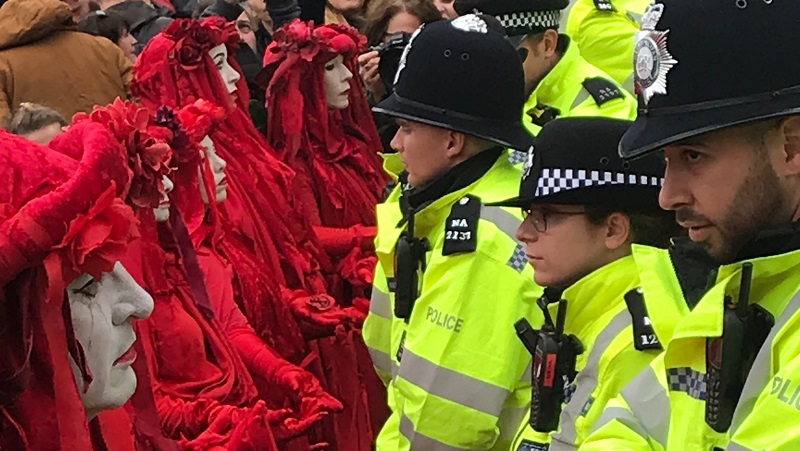 The UK’s High Court overturned a city-wide protest ban against Extinction Rebellion protests on Wednesday, rendering illegal arrests that took place under it.

Lord justice James Dingemans and justice Martin Chamberlain said the Met had used powers beyond the reach of the law, Section 14 of the 1986 public order act, which can only apply to single assemblies.

The judges ruled that the movement’s uprising, which brought much of central London to a standstill, constituted multiple, physical assemblies despite being organised under the umbrella of one movement.

Imposed after a week of disruptions in London, the ban instructed “any assembly to linked to Extinction Rebellion ‘Autumn Uprising’ (publicised as being from 7th October to 19th October at 1800 hours) [to] cease their protests within London by 2100 hours 14 October”.

“We’re delighted with today’s result,” Extinction Rebellion lawyer Tobias Garnett told reporters outside the court. “It indicates our belief that the police’s blanket-ban was unprecedented and now unlawful on our right to protest. It’s a victory for those who want to draw the government’s attention to what the scientists have been telling us for decades, which is: that the planet is warming, that we’re in the midst of the sixth mass extinction, that we are responsible and we have a very short time to do something about it.”

“Rather than criminalising Extinction Rebellion’s activists, we call on the government to tell the truth and act now on this ecological emergency,” Garnett said.

Protesters could now sue the Met for wrongful imprisonment and receive compensation.  Jules Carey, a lawyer from Bindmans who acted for the protest group, estimated the number of arrests that took place under the ban at “around 700 people”.

Carey told the Guardian each compensation claim could be several thousands of pounds. “It’s a very expensive mistake for the Metropolitan police.”

“This judgment is a vindication of those who have sought to defend our crucial right to protest,” Monbiot said. “Non-violent civil disobedience is essential to democratic politics – in fact there would be no democratic politics without it. The attempt by the Metropolitan Police to shut down civil protest was a direct assault on democracy. I am delighted it has been struck down.”

Chown, who said she was arrested on 7 October “for doing nothing more than standing more on Trafalgar Square”, described the judgment as an immense victory for the right to assembly and to protest, which are cornerstones of democracy”

“It does outline that in some ways the courts can be our friends and the police have to be really careful of how they use their powers with demonstration,” Sarah Lunnon, a member of the movement’s political circle, told CHN. “I don’t think activists always recognise that”

Earlier in October, Joanna Gilmore, an academic specialising in public order law at the University of York, told CHN that a successful overturn of the ban would not spell the end of Extinction Rebellion’s troubles. “If they stop arresting people under Section 14, they’ll start arresting people under other offences such as aggravated trespass offences. There’s a broad range of powers they can draw upon.”

The police would be able to issue the Section 14 order again, this time refining the terms of the act by perhaps narrowing the ban to a smaller geographic area