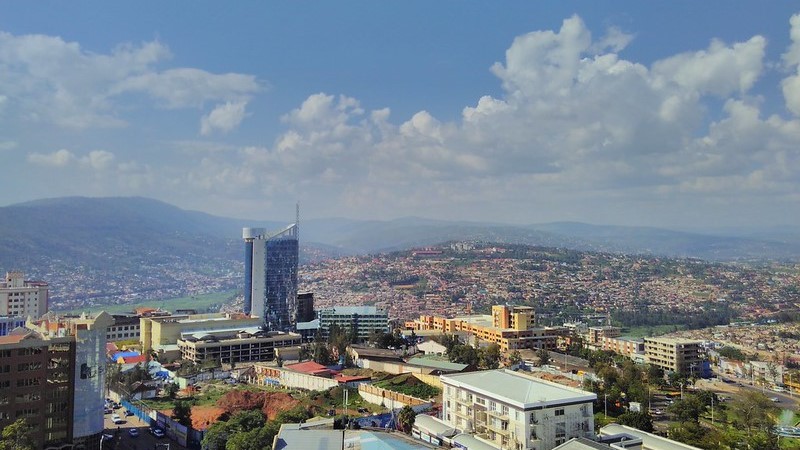 The Rwandan government in Kigali is the first in Africa to have submitted an enhanced climate plan to the UN (Photo: Erdbeernaut/Flickr)

Rwanda is the first African country to submit a tougher climate target to the UN, promising to cut emissions at least 16% by 2030 compared with a business-as-usual baseline.

Subject to technical, financial and technological support from richer nations, the small landlocked country said that could go up to a 38% emissions cut in the next decade.

The submission marks a commitment to climate action from the country of 12.5 million people as governments around the world are reeling from the coronavirus pandemic.

Under its first climate plan presented in 2015, Rwanda set out a number of policies to reduce emissions but without a quantifiable target. The target’s sectorial scope was also extended and now includes hydrofluorocarbons (HFCs).

Rwanda’s economy is fast growing. The World Bank described the country in the “middle of an economic boom” before the Covid-19 outbreak, with growth exceeding 10% in 2019.

Under business as usual, Rwanda’s emissions are forecast to more than double between 2015 and 2030, rising from 5.3 million tonnes of CO2 equivalent to 12.1 million tonnes in 2030, driven by a rise in fossil fuel use, increasing energy demand and road transport.

With technical and financial support, Rwanda estimated it could reduce its total emissions by 4.6 million tonnes of CO2 by 2030. Measures include the deployment of hydro and solar energy, improving energy efficiency in industrial processes, introducing vehicle emission standards, rolling out electric vehicles and promoting on-farm biogas use.

Rwanda is reliant on rain-fed agriculture for rural livelihoods and exports of tea and coffee as well as depending on hydropower for half of its electricity generation. But rainfall has become increasingly volatile in recent years, with variability expected to increase by 5-10%, the government said.

“Our country is already counting the cost of climate change. We have already tragically lost more than 140 citizens and more than 3,000 homes due to floods and landslides this year alone,” said environment minister Jeanne d’Arc Mujawamariya.

“With this new, more ambitious climate action plan, we have a clear roadmap to limit our already low emissions and ensure our society and economy are resilient to the impacts of a warming world.”

Rwanda will need around $11 billion to achieve the full potential of its climate plan, including $5.7bn for carbon-cutting measures and $5.3bn for adaptation – with measures conditional on international support accounting for 60% of the estimated cost.

Faustin Munyazikwiye, a climate negotiator and the deputy director general of Rwanda’s Environment Management Authority, told Climate Home News the looming global recession would make it “very challenging” for developing countries to fight climate change and pursue economic development. “This will require increased cooperation between all countries,” he said.

Patricia Espinosa, head of UN Climate Change, congratulated Rwanda on its new plan. “As Covid-19 has not postponed the climate crisis, I am looking forward to receiving more updated ambitious [climate plans] from other countries,” she said in a tweet.

Helen Mountford, vice president for climate and economics at the World Resources Institute, said the new plan was “significantly more robust” that the one Rwanda presented five years ago and could boost development and job creation at a time when countries are looking to reboot their economies after Covid-19.

“As the first African country – and least developed country – to submit a strengthened climate commitment in 2020, Rwanda is demonstrating the kind of leadership that the world needs right now,” she said.

Rwanda is due to host the next Commonwealth heads of governments meeting – initially scheduled in June but postponed to unspecified dates – when the government is expected to make the case for greater climate ambition.

Earlier this year, New Zealand told the UN it was waiting for official advice on how to align its climate target to the 1.5C temperature goal due in early 2021 before revising its national plan.

Under the Paris Agreement, countries are due to update or communicate their 2030 emission-reduction plans and publish long-term decarbonisation strategies before the end of the year.

Countries have agreed that new climate pledges should “represent a progression” beyond previous pledges and represent the highest possible ambition. And there is widespread expectation on governments to increase their climate plans this year to bridge the ambition gap and keep global temperature rise “well below 2C”.

But the coronavirus pandemic has slowed many countries’ work on revising their climate goals and some developing countries have warned they would struggle to submit new plans before the end of the year.

None of the world’s largest emitters have so far upped their contributions to address global warming.

The next UN climate summit, Cop26 in Glasgow, UK, has been postponed to 2021. In practice, the delay gives countries a little more time to develop their climate plans ahead of the political moment.