US, Japan and the UK are among the backers of a scheme to exploit Mozambique’s gas reserves, despite climate, security and human rights concerns 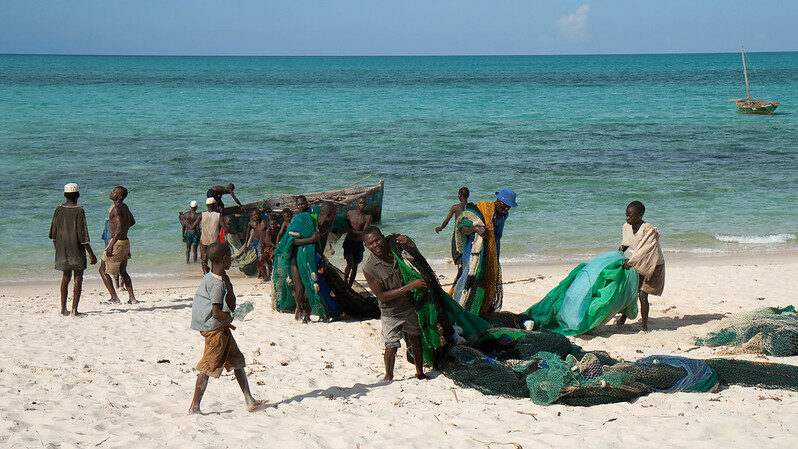 The US, Japan, UK, Italy, Netherlands, South Africa and Vietnam are putting public money towards a $14.9 billion package of loans, the biggest on record in Africa. The African Development Bank and 19 commercial lenders are also contributing.

The mammoth bet on LNG comes amid a global pandemic and despite climate, security and human rights concerns.

French oil major Total, which acquired a 26.5% stake in the project from Anadarko last year, hailed it as a “significant achievement”. “It demonstrates the confidence placed by the financial institutions in the long-term future of LNG in Mozambique,” said chief financial officer Jean-Pierre Sbraire in a statement.

Climate analysts argue that confidence is misplaced, as increasing fossil fuel production clashes with international climate goals. The 2019 Production Gap report found governments are collectively planning to extract 47% more gas by 2040 than can be burned within a 2C global warming limit.

“It’s horrible to see Total boasting about funding the biggest fossil fuel project of its kind on my continent, the continent that is being ravaged by climate change. These oil and gas companies are literally profiting from our suffering,” said Mohamed Adow, director of the think-tank Power Shift Africa.

“If Total truly cared about Africa, rather than their own bottom line, they would be helping us to develop using clean, renewable power, not more dirty energy.”

Total and partners are planning to develop two gas fields in the Cabo Delgado province of northern Mozambique and build a plant capable of liquefying 13.1 million tonnes a year for export.

The government of Mozambique expects gas development to generate billions of dollars in revenue and raise the country to middle income status by the mid-2030s. However, this is based on bullish price forecasts that look increasingly unlikely to materialise, since the coronavirus pandemic hit demand.

Residents were initially hopeful the gas discovery would bring jobs and investment to the area, Climate Home News found. Instead, they are now facing an Islamic insurgency, which has killed at least 600 civilians since 2017 and targeted gas workers. Families have been moved from their homes and land without compensation, while watching well paid jobs go to the urban elite or foreigners.

Total denies there was any forced displacement and insists the insurgency has nothing to do with the gas development.

The Export-Import Bank of the US is the providing the biggest chunk of debt finance, at $5 billion, followed by the Japan Bank for International Cooperation on $3bn.

UK Export Finance (UKEF) is providing up to $300 million in direct loans and $850 million of guarantees to underwrite commercial lenders. This is expected to support 2,000 British jobs.

The UK’s support has received particular attention, as it appears to contradict the government’s mission as host of the next UN climate summit, Cop26, in November 2021.

“Our aim is to ramp up ambition towards a climate-resilient, zero-carbon economy,” said Alok Sharma, business secretary and Cop26 president, at last month’s London Climate Action Week. He asked all countries to make deeper emissions cuts by 2030 and aim for net zero emissions.

To support those goals, Sharma added, “we must… make sure that climate risk is factored into every single investment decision taken around the world”.

Matthew Pennycook, lawmaker and climate spokesperson for the Labour opposition party, called on Sharma to review the Mozambique decision in line with his green rhetoric.

Financing fossil fuel projects through UKEF risks “locking low and middle-income countries into high-carbon dependency for decades to come,” he said in a letter to Sharma dated 19 July. Conversely, if governments step up to meet the Paris climate targets, most of these projects “will become stranded assets”.

“We urgently need a different approach,” wrote Pennycook. “The government has an opportunity to match its stated net zero priorities at home with its practices abroad, and to show the leadership and consistency required from its Cop presidency to make next year’s summit a success.”

Louise Burrows, an expert on export credit agencies at E3G, said of UKEF’s funding for the Mozambique project: “This is a wrong and disappointing decision on a number of levels. This project is a sad repeat of colonial history whereby the UK’s interests have been favoured over the economic and social prosperity of Mozambique.”