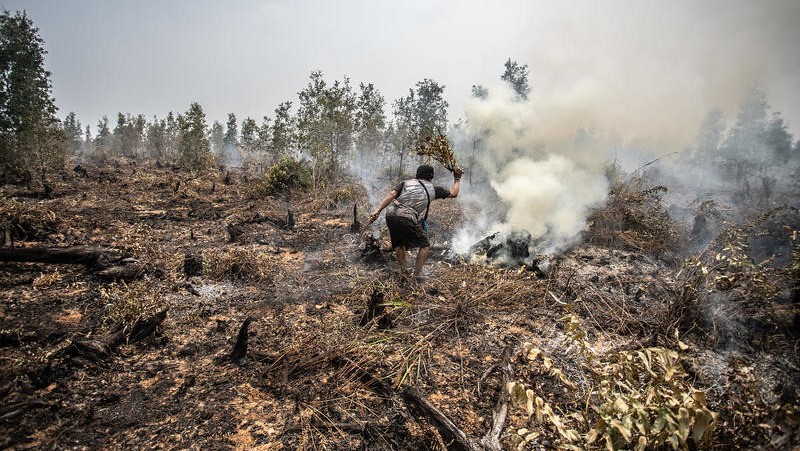 A man tries to extinguish fire on peatland at a sanctuary reserve area inside an oil palm concession in Central Kalimantan (Photo: Jurnasyanto Sukarno / Greenpeace/Flickr)

Forest loss in Indonesia rose 50% in the first 20 weeks of 2020 compared to the same period in 2019, according to data from the Global Land Analysis and Discovery (GLAD) laboratory at the University of Maryland – which operates a global warning system for forest loss – and analysed by Greenpeace.

Analysis of the same data by WWF Germany found that in March alone, forest clearance in Indonesia was up 130% compared to the three-year average for March 2017 to 2019 with an estimated 130,000 hectares razed – the greatest recorded loss of any country that month.

It is the starkest example of a global trend that saw forest loss alerts rise significantly since the start of the pandemic across Asia, Africa and Latin America.

“The reduced presence and capacity of law enforcement on the ground means there is more space for illegal activities,” said Oyvind Eggen, executive director at Rainforest Foundation Norway.

“Deforestation increase could be one of the most long-term impacts of the Covid-19 crisis as governments all over the world are thinking about the short term.”

In 2010, Norway pledged up to $1 billion to help Indonesia reduce greenhouse gas emissions from deforestation, with payment based on results. As deforestation rates fell in 2017, Indonesia is set to receive its first payment under the deal between the two country this year.

The latest figures released by the Indonesian government show deforestation has been largely stable over the last two years – increasing 5% during that period.

Eggen told CHN he was worried about the picture painted by the latest data. “Are we going back to an environmental catastrophe that was about to be halted? The satellite data doesn’t lie,” he said.

More data and observations from the ground will be needed to determine who is responsible for the destruction, said Eggen. Travel restrictions to prevent the spread of the novel coronavirus have created a gap in the records.

But “the palm oil and paper sector have been running business as usual,” he said. The Indonesia Palm Oil Association said workers’ movement in and out of the plantations were restricted but there were no plans to reduce activities, Reuters reported in April.

Indonesia is the world’s top palm oil producer and is heavily dependent on exports. Palm oil plantations have expanded from 3.6 million hectares in 2008 to 16.8 million in 2019, according to the Forest People’s Programme.

Clearing primary forests and peatlands for plantations or logging is banned under Indonesian law and a moratorium on new oil palm plantations has been extended to 2021.

A lack of transparent government data makes it difficult to attribute the deforestation spike to illegal activities or the granting of new permits in spite of the moratorium, Taufik said.

Angus MacInnes, project officer at the UK-based Forest People’s Programme, told CHN law enforcement was “often complicit in the conversion of forests to industrial concessions”, citing cases of alleged intimidation and violence against indigenous activists during the pandemic.

Indonesia’s forestry ministry did not respond to CHN’s request for comment.

Informed by local intelligence, Syaf said there had been a significant increase in illegal logging and forest conversion into palm oil and coffee plantations during the pandemic compared to last year.

Some communities suffering from the economic fallout of Covid-19 were turning to illegal activities including gold mining and logging to survive, he said, as traditional activities such as rubber farming were no longer sufficient to support livelihoods.

As the fire season gets underway in Indonesia, Taufik, of Greenpeace, questioned whether the government had been able to take fire prevention measures this year. At the end of July, 64,000 hectares had already burnt, he said.

Fires in Indonesia’s forests and carbon-rich peatland cause haze, clouds of smoke including PM 2.5 pollution, which has been linked to a higher death rate from Covid-19. According to the World Health Organisation, Covid-19 cases are on the rise across the country.

While this year’s fire season is forecast to be milder than last year’s blaze, based on weather conditions and potential fuel levels, the stakes are higher. Taufik said the government needed to do more to restore peatland or face a double health crisis of toxic haze and Covid-19.

However the government is concerned with rebooting economic development and creating jobs, by pushing a bill that would revise 79 laws and weaken environmental regulations.

The proposed omnibus bill would scrap the obligation to carry out environmental and social impact assessments for new business licenses, remove a requirement for all regions to maintain a minimum of 30% of their territory as forest area, and eliminate a strict liability rule that compels companies to protect their land from fires.

Indigenous rights and forest campaigners fear it will sacrifice the rainforest and its people to facilitate business.

Analysis by Indonesian forest protection NGO Madani found that, if approved, the bill could see five provinces lose of all of their natural forests to deforestation. That would breach the country’s climate commitment in the forestry sector.

“Environmental damage will cause disasters that will ultimately destroy the Indonesian economy entirely,” Syaf, of Warsi, warned.