The UK host of critical Cop26 climate talks was tipped to set out its vision to world leaders during the UN general assembly, but the timeline has slipped 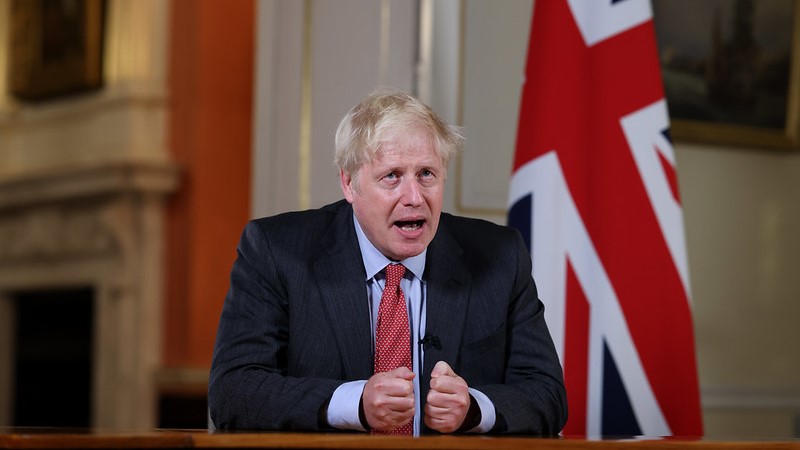 The UK is working on a raft of plans to drive climate action ahead of critical UN climate talks in Glasgow, but its strategy is being challenged by a resurgence of Covid-19 cases at home.

Prime minister Boris Johnson was poised to outline his government’s vision for the November 2021 climate summit, known as Cop26, at the virtual UN general assembly session that started on Tuesday.

Instead, a number of policy announcements, including ending overseas fossil fuel financing and bringing forward a ban on the sales of new petrol and diesel vehicles to 2030, are being deferred to later this autumn, several sources have told Climate Home News.

Plans for a National Investment Bank to help the country cut its greenhouse gas emissions to net zero by 2050, which have gathered wide support in government, could also be delayed.

On Tuesday, Johnson presented new restrictions to halt a steep rise in coronavirus infections, warning the country had reached a “perilous turning point“. His name was absent from the list of world leaders sending video messages to the UN general assembly plenary.

“There is appetite to try and make these announcements happen but the rise in Covid-19 cases has affected the government’s ability to give the climate agenda its full attention,” Tom Evans a researcher in climate diplomacy for think tank E3G, told CHN.

The timing for the plans to be announced matters because of the “global resonance that they carry” as the UK seeks to leverage more ambitious action from others, Evans said.

Xi Jinping: China will aim for carbon neutrality by 2060

Measures in the pipeline include ending the financing of coal, oil and gas overseas, with exemptions for some gas power plants. Sources have told CHN the policy could span all overseas energy spending, including aid as well as UK Export Finance, which provides loans and guarantees to boost British exports.

It follows a huge backlash to a UK commitment to provide more than a $1 billion in support for a mammoth project to exploit Mozambique’s gas reserves.

Although an announcement was initially expected this week, it is likely being delayed to later this year so the government can couple it with support for the UK’s oil and gas workforce to change careers.

An announcement could emerge in November as part of a package to deliver the UK’s 2050 net zero emissions goal, according to the Guardian.

A national investment bank is the last initiative tipped to support the UK’s domestic climate ambition. Source close to the UK government told CHN the measure was widely closely tied to the UK’s spending review of its capital budget to 2025, which is due to for publication in the autumn.

The bank could finance large scale efficiency improvement in the heat network and supply chains, for example. It would be a successor to the Green Investment Bank, which was created by the UK  government in 2012 but privatised in 2017. The UK will lose access to the European Investment Bank when it formally leaves the EU on 1 January.

The package of measures is intended to put the UK on track to meet its 2050 carbon neutrality target.

While there is “a lot of energy in government” for a green economic recovery to Covid-19 that will help meet the UK’s targets, it is “threatening to get squeezed” by shifting priorities, Shaun Spiers, executive director of the UK-based environmental think tank Green Alliance, told CHN.

As the rest of the world grapples with the coronavirus pandemic, there is an understanding of the UK’s difficulty in landing more ambitious climate pledges, one developing country diplomat told CHN. But this pass card won’t last long if the UK wants to set the pace.

In a surprise announcement on Tuesday, President Xi Jinping said China would aim to achieve carbon neutrality by 2060 and promised to strengthen its carbon-cutting efforts to 2030. The EU is negotiating internally to increase its 2030 target to reduce emissions by at least 55% from 1990 levels.

If the UK government lands its domestic package for climate action and a new climate plan before the end of the year, it would be “a huge win” and “put pressure on everyone else” to step up, Evans added.

Throughout the pandemic, the UK said it was powering ahead with its climate diplomacy. Earlier this month, Sharma told UK lawmakers he had held bilateral talks with 35 countries and the Cop26 team had interacted with more than a 100 governments.

The council aims to leverage the finance, technology and know-how to speed up the energy transition at a time when countries are deciding how to target spending to reboot their economies.

By Cop26, the UK hopes the council will have enabled several developing countries to come forward with commitments to prioritise sustainable energy and phase out coal power, and ensure international support for these transitions beyond the Glasgow summit.

The council success’ will be judged by “results on the ground,” she told CHN in an email. Standards should also be agreed to identify the cheapest sustainable option for growing energy access so it can be supported by “large-scale finance,” she added.

“My hope is that the council can resolve some of the systemic issues in finance and lack of coordination on technical assistance that are holding back scaling up renewable energy and energy efficiency.”