Brazil’s military operations are not halting deforestation in the Amazon

In 1970, President General Emílio Garrastazu Médici started building the Trans-Amazonian Highway and opened an immense strip of forest stretching from the state of Amazonas to the state Pará to settlement.

Fifty years later, Operation Green Brazil, led by Vice-President General Hamilton Mourão, has deployed hundreds of soldiers to try to contain deforestation and other environmental crimes enabled by the highway.

One stage where Bolsonaro’s militarised strategy against environmental crimes is playing out is Apuí, 450 kilometers south of Manaus, the capital of Amazonas state. With an area roughly the size of Croatia, the municipality was born from the Rio Juma Settlement Project, launched in the early 1980s and managed by the National Institute for Colonisation and Agrarian Reform (INCRA).

But the aim of distributing around 7,500 plots of land for family farming has not been completed. Most of those who benefited from the distribution left, amid a process of concentration of land ownership, and today the local economy is based mainly on extensive cattle ranching, the primary vector of deforestation in the Amazon region. 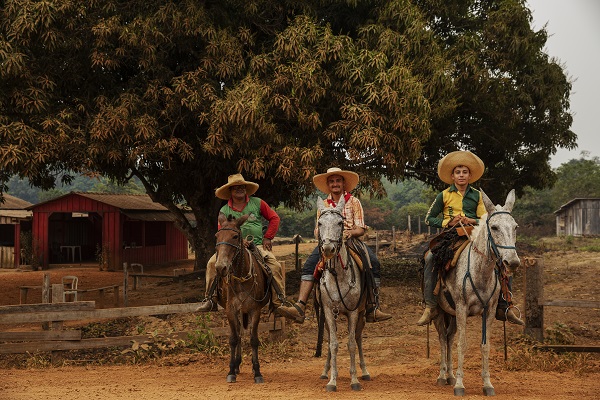 Cowboys pose for a photo on the Transamazonian highway, in the rural area of Apui, in the south of Amazonas State. ( Photo: Lalo de Almeida/ Folhapress ) 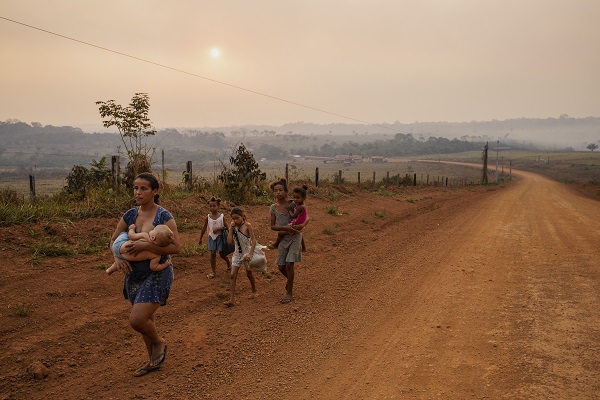 A newly arrived migrant family from Rondonia walks along the Transamazonian highway in the rural area of Apui, in the south of the Amazon, in the southern of Amazonas State. ( Photo: Lalo de Almeida/ Folhapress )

This process of conversion of forest into pasture has gained new momentum since 2019. Despite Operation Green Brazil, Apuí lost 23,186 hectares from January to August – 5.1% more than the total area cleared last year. The numbers come from the non-governmental initiative MapBiomas, which monitors land use in Brazil.

The military has been in Apuí twice this year operating under the guarantee of law and order powers. The focus of the first incursion, from 20 to 26 June, was fighting deforestation, with the participation of Ibama, the Brazilian Institute of the Environment and Renewable Natural Resources, since the military is unable to carry out procedures such as applying fines.

The second time the army went to Apuí, in August, it provided support to firefighting efforts undertaken mainly by the town’s firefighters, hired through an Ibama national programme for preventing forest fires, known as Prevfogo. 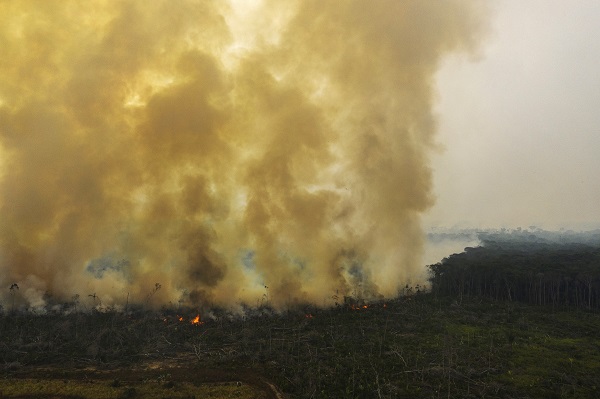 Smoke billows from a fire in an area of the Amazon jungle as it is cleared by farmers near Humaita, in the southern Amazonas State. ( Photo: Lalo de Almeida/ Folhapress )

Joint operations involving the armed forces, Ibama and the Chico Mendes Institute for Biodiversity Conservation (ICMBio) are not a new feature of the Bolsonaro era. The difference is that, in the past, the military was limited to providing logistic support for operations such as camping, transportation of seized goods and land, river and air travel.

And the presence of soldiers has a deterrent effect on criminals who almost always have firearms. This effect is temporary, however, lasting only during the operation.

Since the wave of forest fires last year, Bolsonaro has transferred the command of operations in the Amazon region to the military. Ibama inspectors accompany the soldiers to write up reports; they are consulted but do not have the power to make decisions on targets and strategies.

One of the main differences is that in the operations they take part in, the armed forces do not allow the destruction of equipment used by criminals in areas of cleared forest and artisanal mining operations, such as tractors and diggers. This is a tactic permitted by law.

Destruction of equipment is one of the main tools employed by Ibama and ICMBio in remote areas. For reasons of logistics and safety, it is almost impossible to transport the equipment to a town. Now, however, the delinquents recover their assets as soon as a military operation moves on from an area. 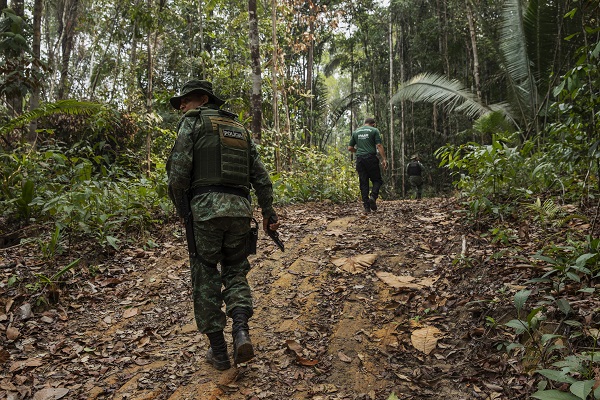 Another difference is the relationship with the press. Before Bolsonaro, Brazilian and foreign reporters used to accompany Ibama on operations in the Amazon area. The images of inspectors destroying equipment and arresting offenders in the jungle had an intimidating effect.

Now, however, Ibama and ICMBio employees have been forbidden to give interviews. General Mourão banned reporters in the operations of the second Green Brazil mission. Over the last few months, Folha made several requests to accompany the military, but all were refused.

On the first day, the team covered 100 km on the Trans-Amazonian Highway and then turned into a side road. After 15 km of dense forest, the convoy reached a recently cleared area, with newly planted grass coming up between burned-out tree trunks.

A little further ahead, there was an area of 30 recently cleared hectares. Large felled and burned trees were piled on one on top of the other. 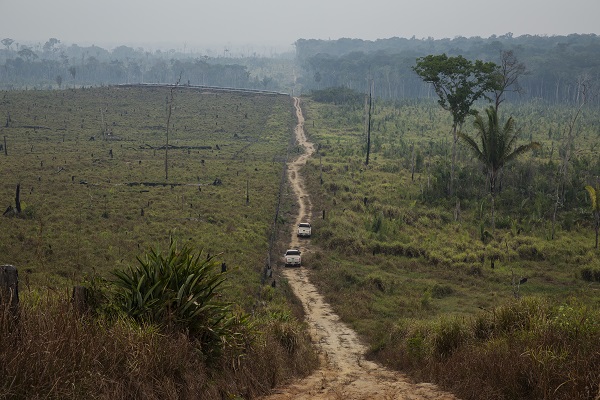 Inspection vehicles of IPAAM, ( Institute of Environmental Protection of the Amazonas State ), escorted by military police, travel along a side-road in search of a recent deforestation area in the municipality of Apui, in southern Amazonas. ( Photo: Lalo de Almeida/ Folhapress ) 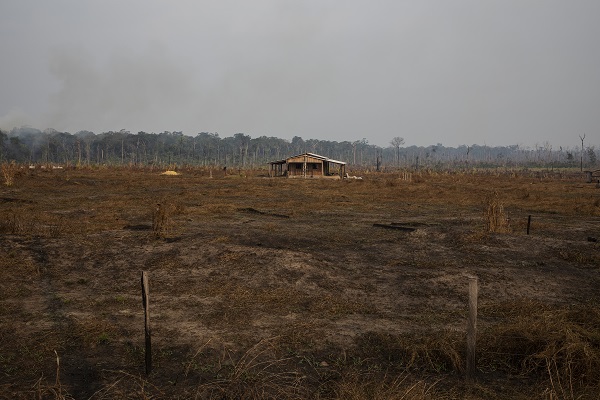 House under construction on a newly opened farm on the banks of the Transamazonian highway, in the rural area of Apui, in the south of Amazonas State. ( Photo: Lalo de Almeida/ Folhapress)

The house that seemed to be the main one of the ranch was empty. A little further ahead, we saw a parked motorcycle with a machete sheath on the seat. The person there had hidden in the forest on hearing the trucks arriving, the officers suggested.

The second day followed a similar pattern: a bumpy dirt road and no arrests. But the recently cleared area was a lot bigger: 400 hectares.

Ipaam stated that on the days Folha accompanied their agents (August 24 and 25), the deforested areas identified came to 2,429 hectares. However, no environmental fine or embargo has been imposed so far because those responsible for the deforestation have not been identified.

The difficulties of fighting deforestation have led the environmental secretary of the state of Amazonas, Eduardo Taveira, to reduce the goals. In June, during the launch of Operation Curuquetê 2, he said the goal was a 15% reduction of the deforested area in Amazonas state from August 2020 to July 2021. Now he says that if deforestation does not continue growing that will already be an excellent result.

Taveira insists the state government’s scope of action is limited because 80% of all deforestation takes place in federal public lands. In these cases, Ipaam can only check if the activities undergone are subject to state environmental licensing.

Another difficulty is identifying those responsible. In the entire state of Amazonas, Taveira says that only 20 of the 58,000 self-declared rural environmental registries, known as Cadastros Ambientais Rurais (CAR), have been verified – no more than 0.03% of the total number. “How can we identify offenders when there is this accountability void? We must increase land regularisation efforts to resolve this situation,” he said.

Created in 2012, CAR is a mandatory electronic self-declared public registry for rural properties. In theory, it should include information such as the situation of permanent preservation areas and legal reserves of native vegetation created to control and fight deforestation. In practice, it has been used by land grabbers to try and legalise invaded and deforested public areas.

As part of the Green Brazil operation, Taveira says the Bolsonaro government remains close to the Military Command of the Amazon and that the state of Amazonas has been receiving logistic support. But he mentions an absence of coordination.

Speaking through its press office, the ministry of defence gave out mistaken dates on which Operation Green Brazil was supposed to have been deployed in Apuí and did not provide specific data on the results of the armed forces’ work in the municipality.

Operation Green Brazil 2 began on 11 May and is expected to conclude on 6 November, subject to extension. The cost of the armed forces resources and personnel deployed between 11 May and 10 June has been estimated at R$ 60 million ($10.8 million). For the following period, a monthly cost of R$ 70 million ($12.6 million) is estimated.

A recent study of 35 years of land policy in Apuí shows there was rapid deforestation taking place in the municipality already before Bolsonaro. From 2013 to 2018, deforestation in the area grew at twice the rate of the rest of the Amazon region.

Authored by researchers Gabriel Cardoso Carrero and Philip Fearnside, among others, the study was published in the Environmental Management journal. It points out that the growth of cattle ranching in Apuí shows the area is part of the market demand for beef. But it also highlights the actions of criminal groups that use deforestation and creation of pastureland to seize public lands illegally.

The study says it is necessary to identify who the land grabbers are, who funds the deforestation and identifying the different actors involved.

Cattle rancher Paulo Lopez has been in the region for 40 years and says the greatest deforesters come from outside Apuí. According to him, the land market has grown with the arrival of buyers from the state of Rondônia, where commercial farming is gaining ground over cattle raising. 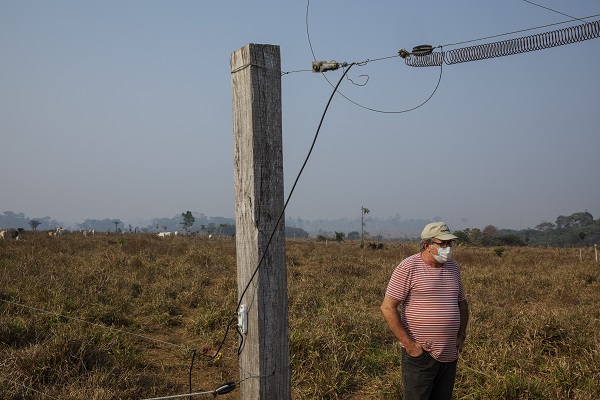 Farmer Paulo Lopez on his farm on the banks of the Transamazonian highway, in the rural area of Apui, in southern Amazonas State. ( Photo: Lalo de Almeida/ Folhapress )

Lopez believes the fight against deforestation requires the regularisation of land ownership, an unfulfilled promise made by successive federal governments. “I have been to many meetings in which it was said that land regularisation was going to take place. I don’t know if it hasn’t happened yet because the government is unwilling or because it’s incompetent.”

According to the environmental secretary of Apuí, Domingos Bonfim, only a tiny proportion of properties in the municipality are regularised. Even among people settled by Incra, the National Institute for Colonisation and Agrarian Reform, he says, not even 5% have the final title deed to their land. But for any progress to be possible, the environmental liabilities brought about by years of illegal deforestation need to be resolved.

This reporting is part of The Amazon under Bolsonaro, a collaboration between Folha De S.Paulo and Climate Home News. Translated from the Portuguese by Clara Allain.