Mangrove revival: How tree-planting is financing women’s businesses in Kenya

Mangrove forests are an essential source of fish, medicines and mosquito repellant to people living on Kenya’s Indian Ocean coastline – as well as providing climate benefits by storing carbon.

In Lamu County, the most heavily forested stretch of coast, nearly 40% of the mangrove area has become degraded, driven by unsustainable logging for construction and firewood.

Local women are reversing the trend, in a community conservation initiative that combines tree-planting with microfinance. Volunteers have restored 10,000 hectares of forest cover, towards a target of 35,000 hectares in five years, raising revenue through the sale of carbon credits. Some of the proceeds go to a microloan scheme, empowering members to start businesses and overcome poverty.

Nuzla Misbahu, a 28-year-old mother of three, chairs the Kizingitini women’s association, a group of 86 women rehabilitating the mangrove forests on Pate Island.

“It is voluntary work because we know the importance of the mangroves to our community. Our husbands rely on the mangroves and fishing to sustain us,” said Misbahu. 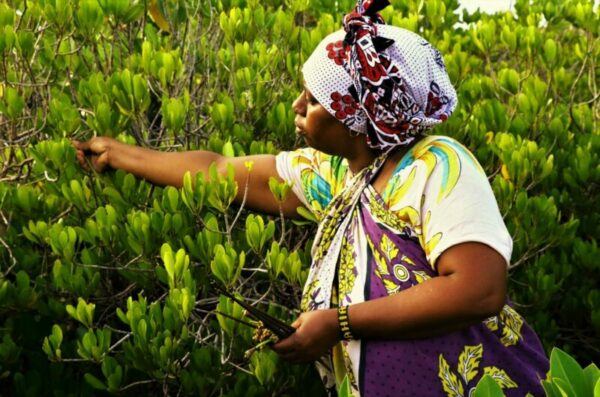 Her group is part of a partnership between the Kenya Forest Service (KFS), The Nature Conservancy (TNC) and Northern Rangeland Trust (NRT) that sells “blue carbon” credits internationally.

The project partners taught the women about the different species of mangroves, where and when to plant them so they thrive. NRT and TNC take groups of women to the field to plant and check on their trees, and clean the beaches.

In return for their commitment, the women get credit, which can otherwise be difficult and costly to access. Last year, ten women received loans of $250 to start businesses, to be repaid at $25 a month. After showing they were creditworthy, that was extended to $500 for repayment over two years.

Misbahu used her loan to open a shop selling household goods, while others sold fish or clothes in the market. She then expanded to sell other retail products. “I make a profit of $3 daily which is good enough for me to pay for my expenses and repay the loan at the end of the month.”

As the first group of 10 moves on, Misbahu explained, another 10 members of the association will get $250, so all will ultimately benefit. So far, 23 women in Kizingitini have set up businesses under the scheme.

“We meet on the 10th of every month to plan on our mangrove work and also take record on how people are repaying their loans, because if one of us misses to pay back then no one in the group will be given more money,” said Misbahu. “It also means those who had not got anything will not be considered.”

In Mtangawanda, another group of 50 women led by Zulfa Hassan has planted over 30,000 mangrove trees since 2018.

Before joining the initiative, Hassan said they tried to replant mangroves without much success. “Very few survived because we didn’t know that there were various species of mangrove plants and that they grow in specific soil within the forest. This is what we have now been taught and about seed handling practices. We can now see unlike before more seedlings are surviving,” she explained.

They are motivated to volunteer because most families in Lamu rely on mangroves, Hassan said. She benefited from microfinance to start a small restaurant selling chapatis and hopes to open a hotel as her access to credit scales up.

Hassan makes about $4 a day, of which $1 goes towards the loan repayment, $1 to her personal savings and $2 for her household use. She is building a house and soon expects to move out of her mother’s house with her family.

“The aim of the project is to improve the livelihoods of the community through the conservation and sustainable use of their natural resources,” Issa Hassan, NRT Regional Director at the coast told Climate Home News. “We focus on women at the coast because of gender discrimination in the region and also women are actively involved in the project.”

Women are initially invited to volunteer for the project and those who are consistently active get to join the microfinance group. So far the initiative has disbursed $57,000 in interest-free loans to 180 women, of whom 68 have repaid the first loans in full.

George Maina, Africa Fisheries Strategy Manager at TNC told Climate Home that although there had been efforts to plant and rehabilitate mangroves in the past, they were unsuccessful due to a lack of knowledge.

“Planting mangroves is very difficult. Out of every 100 seedlings planted, it is estimated that only 30 survive,” said Maina. “It was important that we train and educate people in the community about mangrove planting to ensure that the right mangroves are planted and the survival rate is high.”

Even the experts are still learning the best way to regenerate the forest. Recently, they started collecting seeds in the forest that show signs of germinating and planting them directly in the ground at low tide, said Julius Nandwa, a KFS officer in Lamu. This achieved a survival rate of 80%, a big improvement on the traditional approach of taking 3-4 months to germinate seeds in a nursery before planting.

Mangroves are among the most carbon-rich forests in the tropics, according to a 2011 study in Nature Geoscience, making them particularly important for mitigating climate change.

Globally, the UN Environment Programme estimates two thirds of mangroves have been lost or damaged, with the rest declining by 1% a year.

Kenya has 61,000 hectares of mangrove ecosystem, 59% of it in Lamu County, according to a 10-year national management plan published in 2017. The plan involves mapping and identifying the degraded forest areas for replanting, areas for harvesting and areas suitable for planting new forests. Promoting community participation is a key objective.

This goes together with enforcement of controls on the harvest and sale of mangrove wood. Exporting mangrove wood has been banned since 1982. Logging for the domestic market was banned 1997-2003 and in response to a surge of deforestation in 2018, but permitted again in 2019 under strict conditions after a backlash from local leaders.

“Extensive logging of mangrove in the past is the major contributor to the current depletion of the mangroves in Lamu,” said KFS officer Nandwa. “Mangrove is a cheap but strong durable wood for firewood and as a building material. That’s why we have people continuously harvesting it without care.”

The penalty for illegal logging is $500 or six months in jail, but enforcement is difficult, said Nandwa. “Accessing the islands is a challenge because of the changing water tides in the ocean and the boat is very expensive and so monitoring of the mangroves depends on the available resources.”

All the same, market conditions have reduced pressure on the ecosystem, according to Abdul Rahman Aboud, a mangrove logger for the last 20 years. The 48-year-old is one of 22 licensed loggers in Lamu but says only seven are active. A one-year licence costs $100.

“Illegal cutting of mangroves has really gone down because if you are arrested you pay a heavy fine,” said Aboud. “The challenge is the market. Since the government banned the export of mangroves to the Gulf, we only rely on the local market which is not good. We sell them to contractors and the hotels at the coast.”

And now local women’s groups have a stake in conserving the mangroves, they look out for excess harvesting, Nandwa said. “The program has enabled the community members to be more vigilant on matters of  encroachment  on the mangrove forest, illegal logging which has led to a reduction in the forest degradation.”

This article is part of a climate justice reporting programme supported by the Climate Justice Resilience Fund. You can find our policy on reporting grants here. All photos are by Vivian Jebet.

An earlier version of this article got Julius Nandwa’s first name and the cost of a logging licence wrong. It mistakenly linked to a similar blue carbon project in southern Kenya. Those errors have been corrected.