OECD: One-fifth of climate finance goes to adaptation as share of loans grows

Donor countries mobilised $78.9 billion of climate aid in 2018, but developing nations are expected to pay back nearly three quarters of the money 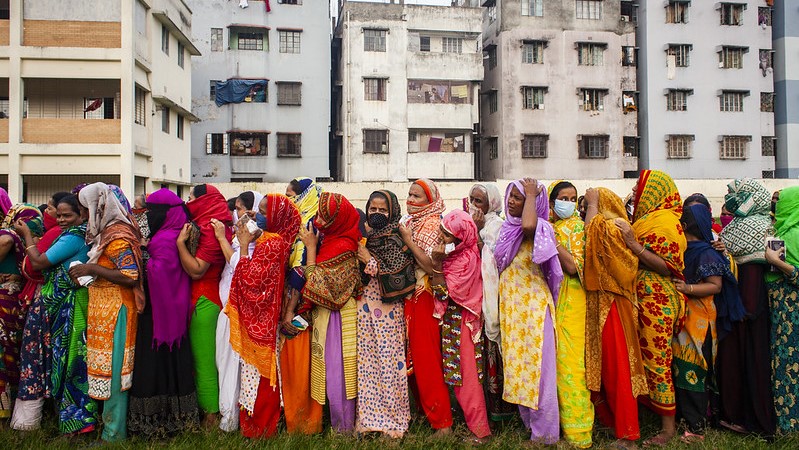 Women wait for relief aid in a suburb of Dhaka, Bangladesh, during the coronavirus pandemic (Photo: UN Women/Fahad Abdullah Kaizer/Flickr)

Financial support to help the most vulnerable countries adapt to intensifying climate impacts continues to fall short compared with money spent to cut emissions, according to a report by donor countries.

Analysis of the latest climate finance data by the Organisation of Economic Cooperation and Development (OECD) – the group representing 36 of the world’s most developed countries – found that only 21% of climate finance mobilised in 2018 aimed to help communities adapt to climate change.

That is only slightly better than in 2017, when 19% of climate finance to poorer nations was aimed to help them cope with climate impacts.

While finance for adaptation has grown more rapidly than support for cutting emissions in recent years, more than two-thirds of the money still went to carbon-cutting efforts, with 9% identified as serving both goals.

Developing countries have long called for climate finance to be evenly split between adaptation and mitigation.

The OECD report analysed progress made by developed countries to meet a 2009 commitment to mobilise $100 billion a year in climate finance by 2020 to help developing countries green their economies and cope with climate impacts.

Donor countries have been urged to announce new climate finance commitments at an event to mark the fifth anniversary of the Paris Agreement on 12 December.

The vast majority of the money came from public finance, with private funding accounting for 18.5% of the $78.9 billion and hardly increasing in value since 2017 – “a disappointment for many stakeholders,” Raphaël Jachnik, climate finance analyst at the OECD, told Climate Home News.

The absence of funding from the private sector would need to be compensated by more public funding if countries are to meet the $100bn goal, he said.

At a time when developing countries are watching their debts mount as they respond to the Covid-19 crisis, most climate finance continues to be delivered as loans – money vulnerable nations are expected to pay back.

Anti-poverty NGO Oxfam last month described the heavy use of loans as an “overlooked scandal”, noting that around half were non-concessional loans.

Reacting to the OECD figures, Tracy Carty, senior policy advisor on climate change at Oxfam, said: “Climate finance is a lifeline for communities facing record heatwaves, terrifying storms and devastating floods. Wealthy countries should stop inflating their figures with loans that will be repaid, and start increasing grants, especially for the most vulnerable countries to use for adaptation.”

Climate finance campaigners of the ACT Alliance network have previously warned that loans and private sector investments tended to favour emissions reductions programmes over adaptation ones – further exacerbating the imbalance between the two.

Between 2016 and 2018, the OECD reported that nearly 70% of all climate finance went to middle-income countries. The least developed countries group received 14% of the total funding and small island developing states just 2%.

That “is particularly unjust,” said Carty, of Oxfam, adding those were the countries that have “done least to cause the climate crisis but are being hit hardest”.

Whether rich countries have delivered on their $100bn commitment might not be known for another two years. Data for 2020 is not expected before the first quarter of 2022 at the earliest, according to the OECD.

The coronavirus pandemic could affect governments and institutions’ ability to collect and report this year’s data, possibly causing further delays.

Only when 2020 data is made available “will it be possible to thoroughly assess the extent to which the [Covid-19] crisis and its aftermath may also have impacted the ability of some developed countries to provide and mobilise climate finance, and of some developing countries to absorb and deploy such finance,” the report noted.