Since the end of a 50-year civil war, Colombia has seen a spike in forest clearance, that the government now hopes to reverse with agroforestry initiatives 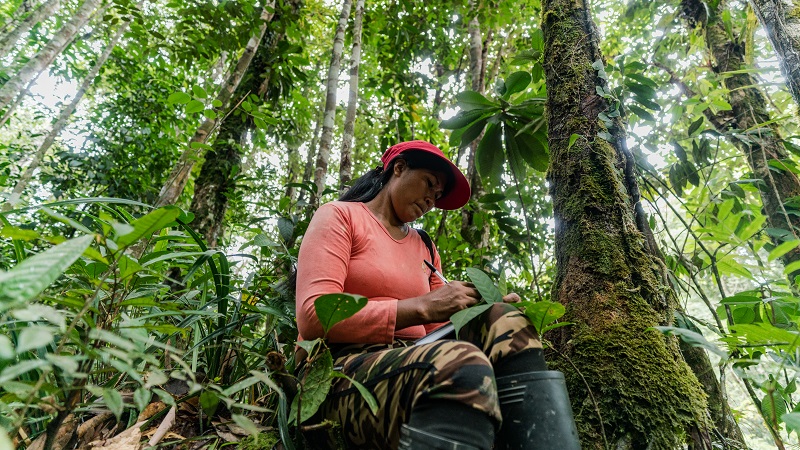 Chela Elena Umir, from the La Chorrera indigenous community in Colombia, carries out an assessment of ecosystem service provided by the community's surrounding forest to strengthen local decision-making as part of a WWF initiative (Photo: Luis Barreto / WWF-UK)

Colombia is banking on its huge natural capital to achieve one of the biggest leaps in climate ambition of any country in the next decade.

With more than half of its territory covered by tropical forests, Colombia has made halting deforestation and restoring nearly one million hectares of forested ecosystems a pillar of its plan to cut emissions 51% from a business-as-usual baseline by 2030.

The new and tougher target announced at the end of 2020 and in the midst of the coronavirus pandemic is a significant hike from Colombia’s previous 20% target.

It was set following extensive intra-governmental and public consultation and aims to establish carbon budgets from 2023 and put the country on a path to carbon neutrality by 2050 .

“In order to comply with those commitments, we definitely need to protect the Amazon and fight deforestation,” Colombian president Iván Duque Márquez told Reuters Next conference this week, calling for a nature-based approach to addressing climate change.

But the task at hand is enormous. Deforestation accounts for around a quarter of Colombia’s total emissions. The 2016 peace agreement which ended more than 50 years of civil war between the government and the rebel group Farc led to a spike in forest clearance.

During the conflict, the Farc operated strict deforestation control to conceal guerilla movements in the forest and preserve their revenue streams from illegal mines and coca plantations, used to make cocaine.

After the group disarmed, illegal land grabbing for cattle ranching, timber or coca production surged in areas that are difficult to police.

Cielo Gomez grows coffee on her land in southeast of Nariño territory, Colombia. The land was restituted to her family by the government after being illegally occupied during the civil war (Photo: UN Women/Flickr)

Data from Colombia’s Institute of Hydrology, Meteorology and Environmental Studies (Ideam), which monitors deforestation in the country, shows deforestation soared to its highest level in 2017 with 219,552 hectares of forest cleared – up from just under 124,000 in 2015.

“What is happening on the ground is not compatible with what Colombia has just committed to,” Estefania Ardila, country engagement specialist for Latin America at the NDC Partnership, which supports developing countries willing to raise their climate ambition, told Climate Home News.

“It’s ambitious. And it’s going to be tremendously difficult to achieve,” she said, describing development challenges with high levels of inequality and unemployment.

To design its climate goals, the government calculated the carbon budget it has to 2030 to stay on a pathway to achieve net zero emissions by 2050.

“That requires that after 2030, we have no net deforestation,” Ivan Valencia, former coordinator of Colombia’s low-carbon strategy who led the mitigation side of the NDC update, now an independent consultant, told Climate Home.

As a signatory to the New York Declaration on Forests, Colombia committed to halving natural forest loss in 2020 and net zero deforestation by 2030, which means any forest clearance needs to be offset by replanting native trees.

By 2019 deforestation levels had dropped to less than 160,000 hectares of land cleared that year. But 2020 goals were missed, as forest clearance nearly doubled in the first three months of the year compared with the same period in 2019.

To save carbon-rich forests and create jobs to reboot the economy from the pandemic, Colombia is working to provide alternative livelihoods for people who live in and around forests.

In its submission of its climate plan to the UN, measures to tackle deforestation account for a third of Colombia’s efforts to meet its 2030 goal. Together with ecosystems restoration, actions related to nature represent more than half of the country’s carbon-cutting effort.

“Unless Colombia complies with its deforestation target and pathway to achieve it, they will not be able to meet their [climate goal] and would have to make a gigantic effort in other sectors to compensate,” said Carolina Jaramillo, Colombia country representative for the Global Green Growth Institute.

Avoiding further deforestation and preserving forest ecosystems provides Colombia with some of the cheapest ways to reduce its emissions, Jaramillo told Climate Home.

Additional emissions reductions from reduced deforestation could be sold as credits under the carbon market mechanism established by the Paris Agreement and help to finance other carbon-cutting measures, the plan states.

Financial incentives are being created for farmers to restore ecosystems that store more carbon by raising livestock more efficiently so they need less grazing land, for example.

Agroforestry initiatives for coffee and cocoa production and the development of sustainable forest plantation for timber are among others.

A recent government strategy for deforestation control supports increasing production of non-timber products, such as natural rubber, fruits and seeds, to protect forests while diversifying the country’s income stream away from a dependence on oil exports and mining revenues.

The development of a bio-economy, which adds value to natural products for medicinal or cosmetic purposes for example, could contribute up to 10% to Colombia’s GDP by 2030 up from less than 1% currently, Jaramillo said.

“How are we going to finance all this in the Covid context? That remains a big challenge,” said Valencia, adding that not all measures had guaranteed funding, leaving a role for the private sector.

And the cost of addressing deforestation will be “difficult to meet” without international cooperation.

In recent years, Norway, Germany and the UK have been supporting Colombia’s efforts to end deforestation through a payment-by-results scheme, under which it received $85 million since 2015. The partnership was renewed in 2019 with a commitment from European countries for an additional $366m to be paid by 2025 for achieving deforestation reduction targets and to implement policies.

“We need to call the whole world to protect that lung of humanity,” Duque said this week about the Amazon, calling for global cooperation in findings ways to finance forest protection through carbon credits and private sector involvement.

While the focus has been put on preserving and restoring Colombia’s forests, campaigners have accused the government of being inconsistent when it comes to its energy policy.

President Duque promised a recovery package to Covid-19 that focuses on the energy transition, clean growth and environmental protection – but measures include ‘greening’ the fossil fuel industry with no plans for its managed phase-out.

So far, the country has spent $374million on supporting fossil fuels and just $4.4million on clean energy as part of its recovery, according to the Energy Policy Tracker.

This includes measures to reduce fugitive emissions in the oil sector and improve energy efficiency in refineries. Reeling from a fall in global oil prices, Colombia is turning its attention to fracking to plug a revenue shortfall. The labour ministry has been tasked to present a transition strategy for workers in fossil fuel sectors by 2023.

Santiago Aldana, a climate campaigner based in Bogotá and member of the advocacy group Climalab, welcomed his government’s ambition on cutting emissions, while improving livelihoods and preserving ecosystems.

But he warned the recovery package had exposed “inconsistencies” between the economic strategy and Colombia’s climate ambition, with fracking likely to further increase the country’s emissions.

“Climate action touches upon the most sensitive aspects of the country such as social inequality, poverty and violence,” Aldana told Climate Home. And to achieve its goal, the government will need to continue to engage with civil society to ensure social and climate justice, he said.