Lost to sea: The Ivory Coast villagers saving their ancestors from rising waves

As rising sea levels slowly engulf the ancestral graves of a fishing community in Ivory Coast, residents are moving their relatives before their bodies are lost to sea forever.

“We have to dig up my mother,” said Franck Avit, standing next to the tomb in the decaying cemetery. Rows of gravestones, often completely in ruins, are covered in sand. “If we don’t, the sea will take her,” he said, while beads of sweat glistened on his skin in the unrelenting West African sun.

After half an hour of hammering, the tomb cracked open. Avit picked up the remains of his mother, Odette Avit, and placed her in a small casket. Then he carried the coffin on his shoulders across the graveyard, placed it onto a cart and pulled it along the coastal path. “The sea has taken it all,” explained Patrick who has been helping Avit move his family to a new cemetery. “Now we are losing our ancestors,” he said wistfully. “It is like they die twice.” 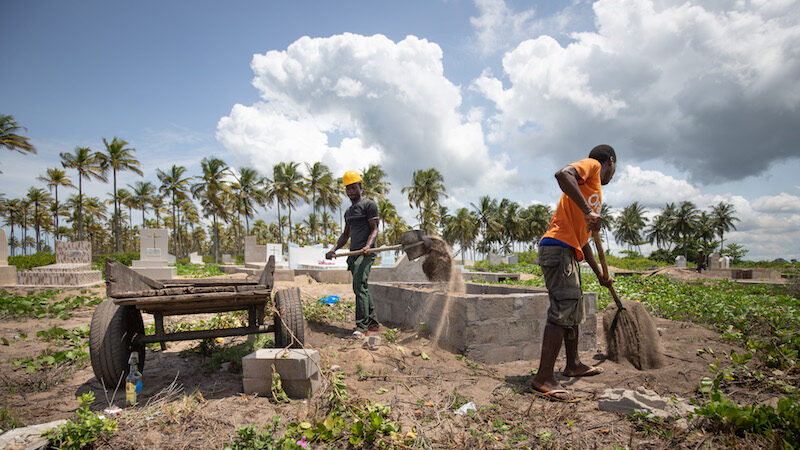 After asking for permission and apologising to their ancestors, Avit and his cousin place the body of his mother in her new grave. (Photo: Alejandra Loreto)

Positioned on a narrow strip of sand surrounded by the Atlantic Ocean, the Tagba lagoon, and the Bandama river, Lahou-Kpanda was once a thriving trading town. But over the past 30 years, the settlement has lost vast swathes of land due to increased flooding and a migrating rivermouth.

The shoreline of Grand-Lahou is shrinking by 1-2 metres every year due to increased rainfall, rising sea levels and coastal erosion, according to the World Bank. Experts estimate that between 2013-2016 the mouth of the river moved 276 metres from east to west. They predict that at the current rate Lahou-Kpanda may disappear altogether by 2050.

“Of course, this is due to climate change,” said professor Ochou Abé Delfin of the West Africa coastal areas management programme (WACA), a World Bank-funded project. “[Flooding events] have intensified in the last two decades.” 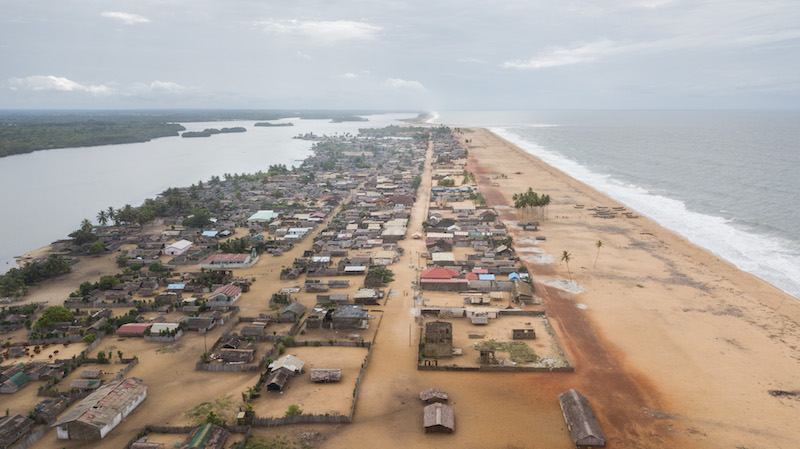 Overview of the town Lahou-Kpanda. It was once connected to the other part of the peninsula. Now the river mouth has grown significantly, the colonial buildings, the old lighthouse, prison and school have disappeared. (Photo: Alejandra Loreto)

Changes in precipitation around the basin of the Bandama river have caused its flow to become stronger and the river to expand, explained Ochou.

Human factors play a role too, he said. Deforestation of mangrove forests for firewood, to smoke fish and for agriculture has left the Tagba lagoon ill-prepared for the increased river pressure. Sand mining is also contributing to coastal erosion, according to WACA.

Célestin Hauhouot, a professor at the Institute of Tropical Geography in Abidjan, said there is no large-scale exploitation of sand in Grand-Lahou. Sand mining, however, does pose a threat to other coastal areas by causing erosion. “If we are not careful, the business could have serious environmental consequences,” he said.

The lagoon’s mangrove forests are breeding grounds for fish but are increasingly vulnerable to deforestation and ecological changes. Rising ocean temperatures are affecting the water’s oxygen levels and salinity, and causing acidification. This leads to the alteration of the wider ecosystem and harms the mangroves and wildlife that live there, including the West African manatee and the peregrine falcon.

Mangroves worldwide store about 24 million metric tons of carbon per year, according to scientific estimates, making them the most carbon-rich forest in the tropics.

Ghanian artisanal fisherfolk have been living in Grand-Lahou for decades. They have traditionally used firewood, including from the mangroves, to smoke the fish that is sold all over West Africa. The chief of the village has prohibited the selling of mangrove wood for cooking fires, but it is still widely used.

Hobbah N’Dabiou Frederic, a 47-year-old Ghanaian fish trader, said villagers should not be blamed for changes to the lagoon. The government, he said, should hire a dredging company to remove surplus sand from the lagoon so the sea can flow freely.

He told Climate Home News he believes the government has the funds to save the town but has not invested in any mitigation measures. “They only come to ask questions,” he said. “The money was probably eaten by corrupt officials.”

The ministry of environment and sustainability did not respond to repeated interview requests. 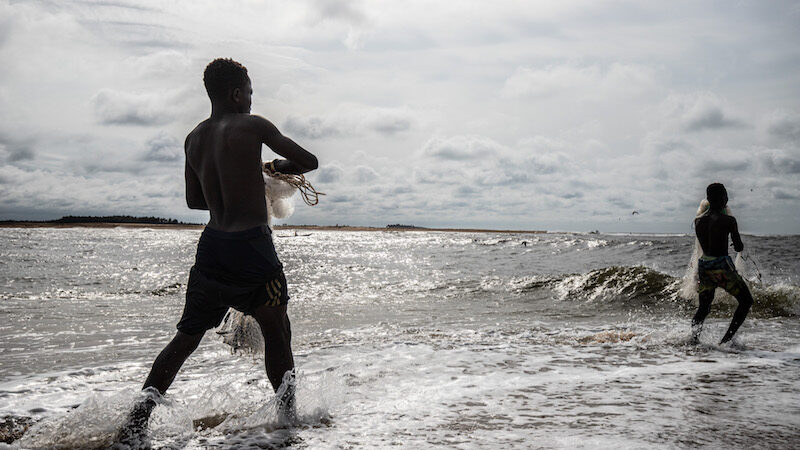 Fishermen set off at dawn. They gather at the river mouth – on the edge of the cemetery – with fishing nets and buckets. (Photo: Alejandra Loreto)

“It is a complex problem,” said professor Ochou, adding that WACA has carried out feasibility studies to identify appropriate solutions, ranging from mangrove restoration to dredging the lagoon. The programme is now moving into the implementation phase, he said. “Doing nothing is not an option,” Ochou added. “It is like a disease, if you don’t address the root causes it will only grow.”

Angèle Djecket Akouba inspected the fish two boys brought to her and nodded disapprovingly. “Too small,” said the 51-year-old trader sitting in front of her wooden house, not far from the river mouth. Even when it brings fish she depends on, Akouba is angry at the ocean. “We didn’t do anything to the sea, but it takes everything from us,” she said.

The destruction caused by previous floods, most recently in 2016, is still felt, Akouba said. The floods destroyed houses, the prison and the local school. “That night was terrible, the water just entered my house. It is scary not to know when it will happen again,” she said.

The coconut trees that used to grow on the shore have all disappeared, but Akouba does not want to move as the peninsula is her home. 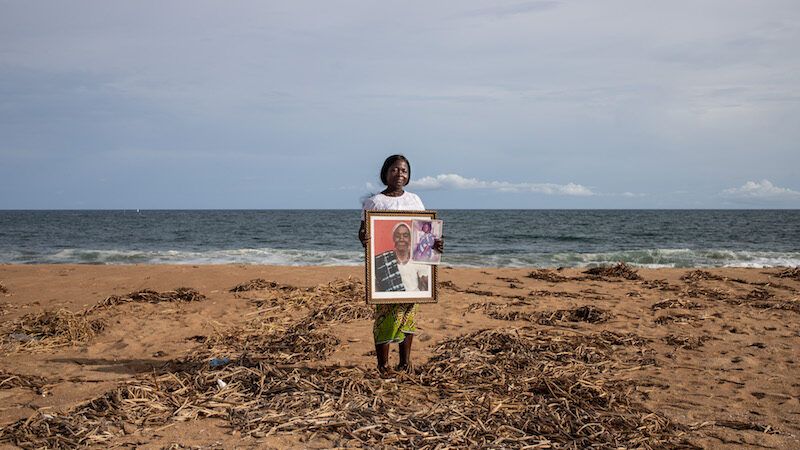 Djecket Akouba Angèle stands in front of the sea holding photos of her mother and sister. The sea took away their bodies before she could move them to the new cemetery. (Photo: Alejandra Loreto)

Recently Akouba lost three members of her family to the sea. She had delayed moving their bodies from the cemetery as it is expensive to do so: it costs nearly $300 for a new grave. The sea claimed her mother, her grandmother, and her father. “It really hurts,” Akouba said while holding a portrait of her loved ones.

For the Avikam and Fanti communities, who live in the lagoon region of Ivory Coast, it is important that people are, and remain, buried where they were born, said Nohonain Ange Martial, a museum curator and an expert in cultural practices in Ivory Coast. Disrupting afterlife and funeral rituals may cause significant grief and anxiety for the relatives of the deceased, Martial said. 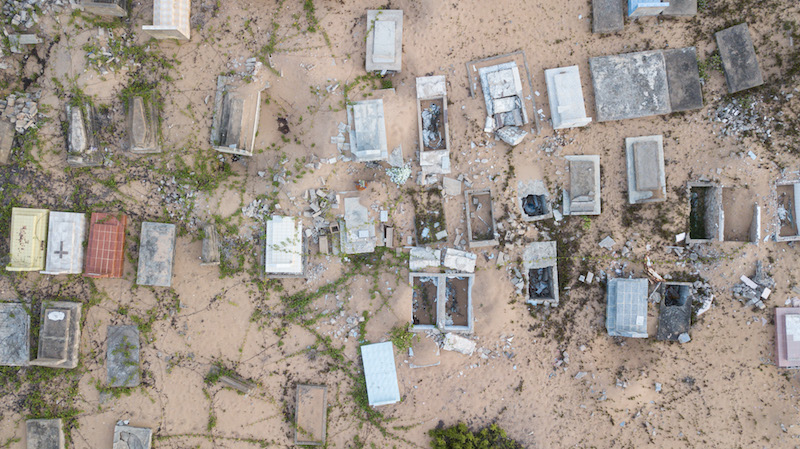 Drone photo of destroyed graves in the cemetery in Lahou-Kpanda. (Photo: Alejandra Loreto)

Avit carefully placed his mother in her new grave, on the outskirts of the village, almost 3km west of the river mouth. He hopes that the new cemetery will be her final resting place. There is no funeral celebration, just a short prayer, before a final a layer of sand is scattered over the grave.

A group of five men stood on a nearby grave with a pink cross. While the situation has caused a lot of harm to the village, responding to it has created some much-needed work, said Virgil Zogouri, a member of the burial team of Lahou-Kpanda. Many young people have already left the village to seek work in the construction industry in Abidjan. “Even women leave to become builders,” said Zogouri. 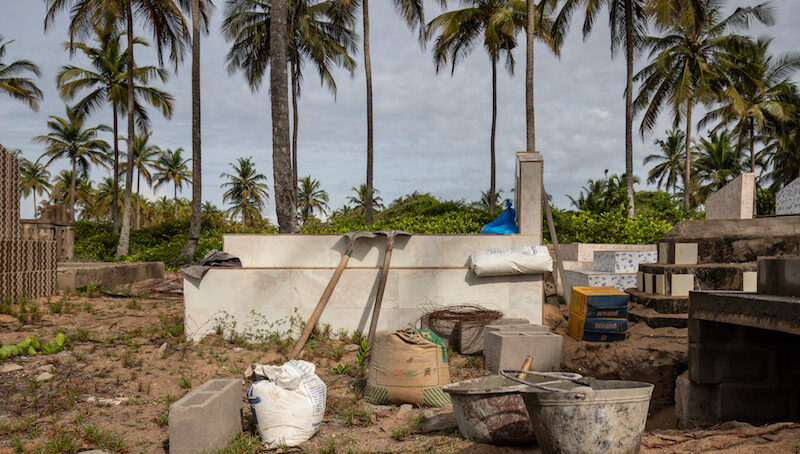 Tools and materials used for the construction of new tombs. The graves are generally made with cement, filled with sand and, if money allows, covered with tiles. (Photo: Alejandra Loreto)

Before moving the bodies, Zogouri asks the ancestors for permission and the family pours gin in the grave. In this way, he explained, people apologise to their ancestors and for the sea’s behaviour.

The job is not for the faint-hearted: “Not all bodies are fully decomposed, bringing health risks,” said Zogouri.

When Avit had finished burying his mother for the second time, he leant on his shovel and gazed at the seashore. “It is bad that the sea takes away your family,” he said, grief etched in his eyes.