Nearly 100 developing countries have come together to define what success means at Cop26, raising the stakes for donor countries to step up their finance pledges 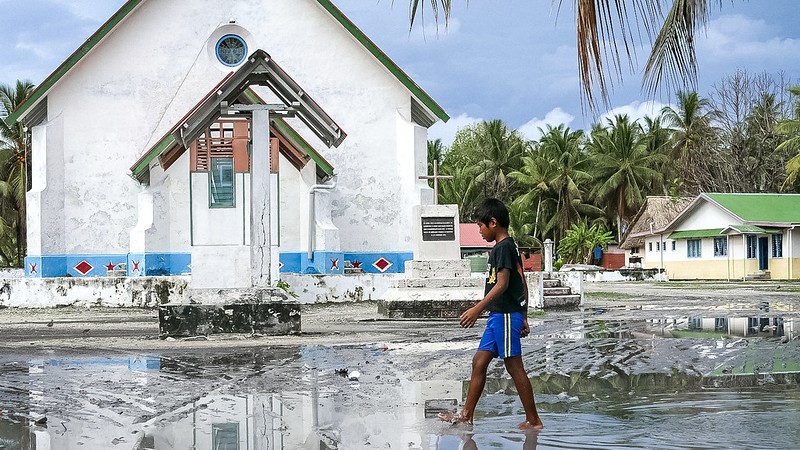 The main square of Nui Island in Tuvalu a month after the passage of Cyclone Pam in 2015 (Photo: Silke von Brockhausen/UNDP/Flickr)

Developing countries have called on rich nations to provide at least $100 billion a year in public finance to help them tackle climate change, ahead of discussions on the next global finance goal.

The document outlines what a solidarity package should look like at the Glasgow summit after developing nations expressed repeated frustration at the slow progress made by donor countries to meet their finance pledges.

“There can be no successful outcome at Cop26 that does not deliver for the most vulnerable,” the plan reads.

The Least Developed Countries group, the Alliance of Small Island States and the African Group of Negotiators backed the plan, including what the finance goal from 2025 should look like.

Countries are due to initiate discussions on the new goal at Cop26 to replace and go beyond a commitment made by rich nations in 2009 to mobilise $100bn a year from public and private sources by 2020 to help developing countries cut emissions and cope with climate impacts.

But rich nations are still an estimated $20bn short in meeting the target, according to the latest available OECD data.

Developing nations have repeatedly warned that success at Cop26 hinges on the delivery of the $100bn goal. They called on donor countries to scale up climate finance to 2025 and publish a plan on how they intend to do so.

But discussions at Cop26 will need to move beyond the 2009 commitment, they say, with an agreement on the next finance goal due in 2024.

Developing countries say donor countries should commit to provide at least $100bn annually in public finance alone from 2025 – up from around $62bn in 2018. This should be complemented by an additional goal of mobilised finance from the private sector.

“We vulnerable countries are not asking for much,” said Sonam Wangdi, of Bhutan, chair of the LDC group. “Just that richer countries, who have caused this problem, take responsibility by cutting their emissions and keeping their promise to help those their emissions have harmed.”

Overall, the new goal “should be based on scientific assessments of the costs of climate impacts and decarbonisation in developing countries,” the plan states.

Mattias Söderberg, co-chair of Act Alliance’s climate justice group, told Climate Home News this was “a good and tactical move” to put a number on the table ahead of Cop26 and ahead of developed nations.

“The need for support will increase and a new target should be possible to scale up,” he added.

UN Environment Programme estimates developing countries currently need $70bn a year to adapt to climate change – a figure that is expected to rise to $140-$300bn a year by 2030. Africa alone needs an estimated $3 trillion to implement its adaptation plans by 2030.

In an analysis published on Thursday, the International Institute for Environment and Development (IIED), estimates that least developed countries (LDCs) need $200bn from 2020 to 2025 and again from 2025 to 2030 to finance their adaptation plans. But between 2014-18, they received less than 3% of the funds they needed.

Mohamed Adow, director of NGO Power Shift Africa, who advised developing countries on the plan, told Climate Home the long-term finance target had to be based on vulnerable nations’ “assessed needs rather than an arbitrary political pledge by rich countries”.

He added the target should be “the bare minimum” provided by donor countries and be made up mainly of grants, with at least 50% allocated to adaptation.

The share of loans in public finance has risen sharply in recent years, reaching 74% in 2018. In contrast, the share of grants declined from 27% to 20% between 2013 and 2018. And only around one-fifth of climate finance is earmarked for adaptation.

To help step up funds for nations to cope with climate impacts, developing countries are calling for 5% of the proceeds from the global trade of carbon credits between nations to be channelled to the Adaptation Fund. The rules for the new carbon market are due to be finalised at Cop26.

Sven Harmeling, policy lead on climate change and resilience at Care International, told Climate Home that including a public finance target in the new finance goal would help hold donor countries accountable, while driving efforts to mobilise more finance from the private sector.

But the discussions ahead won’t be easy. As the UK government cuts its aid budget and with donor countries already failing to meet their climate finance obligations, negotiations on the need for long-term finance “will become a battle”, warned Söderberg.

The story was updated 30/07/21 to reflect the fact the plan doesn’t definitively set out Aosis, the LDC group and the AGN’s negotiating positions.