From Chile and Taiwan via Glasgow, youth call for climate justice

Tens of thousands of demonstrators marched through Glasgow past the Cop26 climate conference venue on Friday, chanting and waving homemade placards 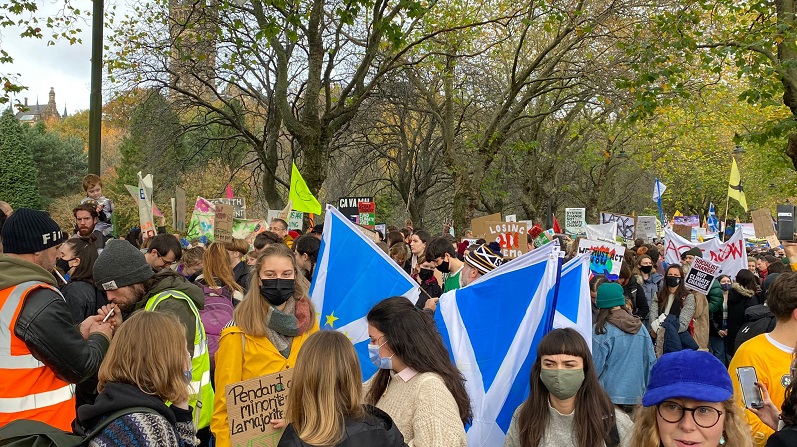 Tens of thousands of people marched from Kelvingrove park, which recently hosted a gala dinner of world leaders, to the Scottish city’s main square. There, young climate activists including Uganda’s Vanessa Nakate and Sweden’s Greta Thunberg were due to speak.

As they walked down Argyle Street, passing near the venue for UN climate negotiations, they were cheered and whipped into a frenzy by university students holding home-made signs saying “no planet B” and “[heart] Greta”.

The protest is getting a good reception from the windows of Argyle Street #fridays4future pic.twitter.com/T2iyIwG2L9

One man was trying to sell Scottish and European Union flags for £5 each ($7) but business was slow. “Good to get a bit of colour around the place,” he told Climate Home News, “and to show we’re in Scotland”.

Among the marchers was Paz Belèn Quevedo from Chile. She told Climate Home News that climate change was affecting not just Chile’s biodiversity but human rights. “There are a lot of hazard zones where there is a lot of pollution coming in,” she said.

She said Chile suffered droughts and forestry companies and growers of avocados and citrus fruits were using up scarce water, leaving little for the local people.

With her was Patsy Contardo, who expressed concern that reforestation initiatives could be counterproductive if done badly. At Cop26, countries agreed to halt and reverse deforestation, promising to include indigenous and local communities in the design of these projects.

“A lot of companies say ‘we plant a lot of trees in developing countries’ but it’s not native trees, it’s just monocultures,” said Contardo.

A small section of the #FridaysForFuture March in Glasgow outside #Cop26 pic.twitter.com/iBLYmKe0aZ

At the back of the march was a small group from the Taiwan Youth Climate Coalition. Taiwan is not a member of the UN because of opposition from China but has sent officials to Cop26 anyway as delegates for the Pacific island of Palau.

Cheng Long comes from Macau and is studying in Taiwan. He said: “Our government [in Macau] don’t focus on climate change. They don’t talk about it. We have a lot of casinos and they are not paying attention to climate change and they need to upgrade their system to more high-efficiency equipment.”

As a coastal city, Long said: “We are very vulnerable to climate change. There was a big typhoon just five years ago and a lot of places were flooded.”

As an observer, Long has been inside the Cop26 venue. Asked what he makes of the conference, he said: “A lot of things have been left behind and we have to really take action now. Developed countries have to give more support to the developing countries.”

Much of the crowd had travelled less far. The Glaswegians in attendance include small children with their parents, groups of teenagers, university students, socialist groups, samba bands and older protesters.

Her older sister, Alice, added: “How do we know people are actually going to do anything at Cop26? How do we know they’re all not meeting to make it look like they’re doing something and not actually do it?”

“In the end, they might just say ‘keep recycling and eat less red meat’ but that’s what we’re already doing” added their friend Sigurast Ragnarsdottir, before Alice Benson said the oil companies were to blame.

Glaswegians Climate Home News spoke to said that air pollution was a problem in the city and that this summer’s heatwave was linked to climate change.

But Glasgow has escaped the worst of climate change’s impacts and they were more concerned with the impact on the global south.

Elinor Benson said: “I heard a story that in the Pacific Islands, if the waters rise just like a couple of inches then some of their islands could be completely sunk.”