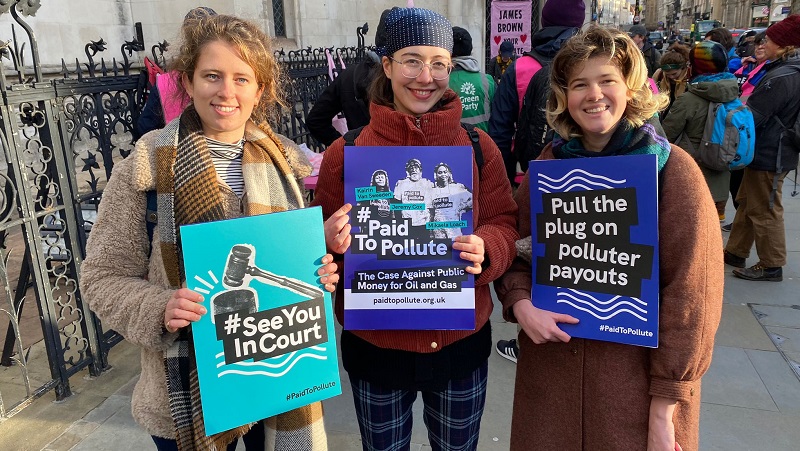 Campaigners outside the Royal Courts of Justice showing their support for the claimants (Pic: Joe Lo/Climate Home News)

Three climate campaigners took the UK oil regulator to court on Wednesday in a bid to prevent them handing out more drilling licences.

Kairin van Sweeden, Jeremy Cox and Mikaela Loach challenged the Oil and Gas Authority (OGA) in the high court over its interpretation of a legal duty to “maximise economic recovery” of petroleum.

Their lawyers argued that the regulator failed to consider government tax breaks to the oil and gas sector and the broader climate change context when deciding what was “economic”.

Outside the Royal Courts of Justice in London, Cox told Climate Home News: “All of the decisions [the Oil and Gas Authority regulator] makes are [based on] whether it is profitable for the oil and gas companies, never mind whether it’s good for the country as a whole.”

If they successfully argue the OGA’s decisions are unlawful then it will have to change how it assesses applications for oil drilling permits. Cox, who used to work at an oil refinery, said he hoped this would end or at least limit new oil and gas extraction in the UK.

“It’s one of the bricks in the wall of stopping new oil and gas projects because we already know we have more than we can burn to stay within net zero [emissions] 2050 and keep 1.5[C] alive,” he said.

The UK produced over 1 million barrels of oil a day in 2020, about 1% of the world’s total. At Cop26 climate talks in Glasgow last month, it declined to join a group of countries committed to phasing out production.

The case hinges on whether OGA acted unlawfully by failing to include tax in its interpretation of the phrase “maximise economic recovery”, which the government passed into law in 2015.

“The OGA was unlawful to take out a key building block of ‘maximising economic recovery’, namely the fiscal position,” Wolfe told the judge. When her turn came, Gallafent responded that the words “economic recovery” are “inherently imprecise” and the OGA is not legally obliged to factor in tax.

According to a report by former oil company director Juan Carlos Boué, the UK’s oil tax regime is far more generous to oil producers than neighbouring countries like Denmark, the Netherlands and Norway.

The UK’s tax on fossil fuel production is lower in the UK than neighbouring countries (Pic: Boue/Screenshot)

Oil companies not only enjoy low tax rates, they get paid back by government when the oil price falls and they stop making as much profit. They also receive tax breaks for the cost of decommissioning oil rigs, an expense which is expected to grow as the world reduces its reliance on oil.

Defending its tax regime, the government’s lawyer Richard Turney said oil and gas extraction was a risky business and the UK’s tax regime must strike a “delicate balance” between getting money in and encouraging oil drillers to come to the UK.

The claimants argued the OGA, which is headed by a former oil businessman, unlawfully failed to take into account foreign ownership and the UK’s net zero emissions strategy when considering whether licenses are in the UK’s national interest.

They said that, of the ten most active UK oil drillers, only three are UK-owned. The government and OGA lawyers said this was irrelevant as they paid taxes in the UK. Responding for the campaigners, Wolfe accepted that they paid tax in the UK but said they often distributed their profits abroad.

Gallafant argued that her client, the OGA, is trying to contribute to the UK’s net zero strategy by reducing the emissions which are a by-product of oil and gas production, like venting and flaring. The OGA does not have the remit or power to reduce “scope 3” emissions which come from burning UK-produced oil and gas, she told the judge.

Grantham Institute researcher Catherine Higham, who co-ordinates the climate laws of the world project, told Climate Home that the number of climate court cases has more than doubled since the Paris agreement was signed in 2015.

The OGA declined to comment. A ruling is expected to take weeks or months.