Za'atari is the biggest solar-powered refugee camp in the world, lighting the way for others

“Our family left everything behind and just, basically, fled for our lives. I was too naive to fully understand what was going on, it felt like a really awful nightmare. I just thought it would end at some point and we will come back home.”

Zahra Abbas was 17 when she fled to Jordan from Syria in the winter of 2012 with her parents, younger brother and elderly aunt. They were among the earliest refugees to settle in camp Za’atari and they are still there.

Located near the northeastern municipality of Mafraq, Za’atari opened in July 2012 as the first Syrian refugee camp in Jordan and has since evolved into a permanent settlement.

“I didn’t know how long we would be here but I didn’t think it would be for this long,” Abbas, now 26, tells Climate Home News. “It was almost nothing when we came here, I remember we got lanterns and a portable stove as a heat source to make it through the winter. We were living in an actual tent. It was cold, dark, and scary. Nothing like it is now.”

Today, Za’atari is not only one of Jordan’s biggest cities by population, with 80,000 inhabitants, it is also the largest solar-powered refugee camp in the world. The UN refugee agency (UNHCR) estimates the 12.9MW solar plant saves 13,000 metric tonnes of carbon emissions and $5.5m in fuel costs a year, compared to using diesel generators.

Residents say better access to electricity has changed their lives – but more is needed to seize the opportunities for remote work and study. Experts say it could provide a model for expanding renewable energy across Jordan and reducing reliance on imported fossil fuels.

In the weeks after Abbas and her family settled into the camp, the population of Za’atari soared, peaking at an estimated 120,000 in April 2013 in an area just over 5 square kilometres.

In its early years, the camp struggled with little to no infrastructure while UNHCR and other international humanitarian aid groups addressed urgent daily needs such as water, food, and health services.

A lack of basic infrastructure such as electricity, water, and waste management as well as the post-traumatic stress many refugees were experiencing led to several clashes, protests and attacks on aid workers.

Now it is an established settlement of cabins and caravans in the middle of the desert with shops, restaurants and a small marketplace or two.

As a long-term resident, Abbas has witnessed the change from “unliveable” conditions to a place that allows young Syrian refugees to have some autonomy over the quality of their lives and their futures.

“I remember being scared. We didn’t have walls around us, there was no proper electricity and it would get dark very early. I didn’t feel safe,” says Abbas. “It was, of course, nothing like Syria’s war but it was not a liveable environment either. It got better over the years.” 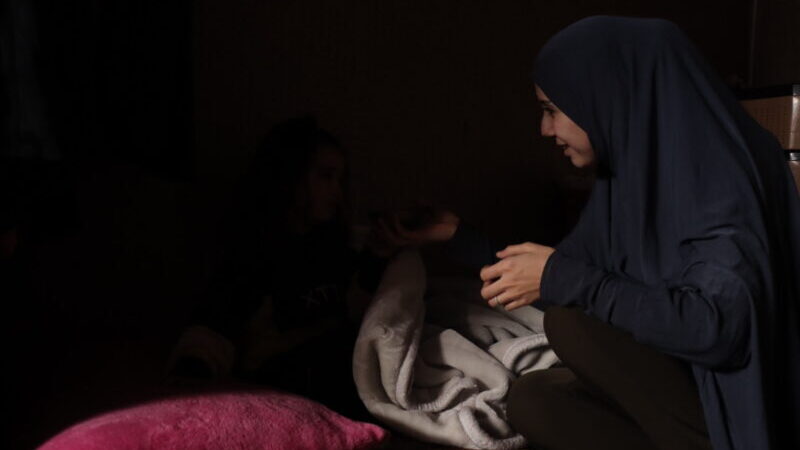 A mother puts her child to bed (Photo: Younis Al-Haraki)

Construction of 40,000 solar panels on the border of Za’atari began in April 2017, in response to the energy scarcity the underfunded UNHCR was struggling to cope with.

“It was becoming impossible to be able to provide electricity to the camp. UNHCR simply could not afford an electricity bill of a million dollars each month,” says Mohamed Al-Taher, a UNHCR external relations officer at Za’atari. To curb costs, camp officials limited electricity access to eight hours a day, from 6pm to 2am.

With power generation capacity of 12.9MW, the solar plant is capable of providing 12-16 hours of electricity every day to each building in the camp, street lights, and operational facilities through a local grid.

Each household in Za’atari can use approximately 936 kWh annually, compared to 1,244 kWh for the average individual living in Jordan outside of the camps.

The $17.5 million project funding came from the German government, through the KfW Development Bank. Arab Gulf countries are increasingly significant donors to UNHCR’s work in the region that caters to Syrian refugees. Recent on-the-ground surveys reveal the influence of Saudi Arabia inside the camp – aid containers carrying the flag of the Kingdom are not an unusual sight. 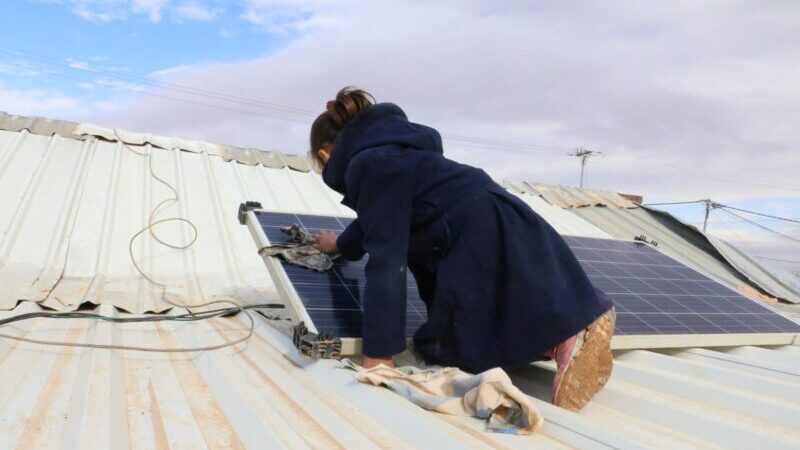 Camp residents say that more reliable access to electricity has opened doors to a much better quality of life.

“For me, a sense of security that comes with street lights after dark has been a very important improvement,” says Abbas. “I would get so much anxiety before.”

In the past nine years, Abbas has married, given birth to two children, improved her graphic design skills (which she was already interested in before the war broke out) and been able to make some income through freelance graphic design work for small businesses in Jordan and Syria – all while living in Za’atari.

An impact assessment by UNHCR finds that electricity in the camp has improved safety for women and children outside the home, reduced tensions between families and increased opportunities to talk and engage with each other after dark.

According to the survey, indoor and outdoor lighting has resulted in an increased sense of community among people because of better access to shops and market areas within the camp.

The ability to run TVs, internet and mobile phones makes it easier for families to stay connected to friends and families outside the camp and 81% of the respondents stated that they now are better able to access to news about Syria.

There is improved access to health services and hygiene, which has been especially important during the coronavirus crisis. Fridges improve the ability to store medicines and Covid vaccines, for instance. Camp residents invented a robotic hand sanitiser made of Lego during a hackathon.

Nearly 3,000 businesses have been launched inside the camp and cities nearby have become more open to employing and working with refugees. The UN estimates that businesses inside Za’atari make around $13 million a month for the refugees and the Jordanians that they do business with.

Official UNHCR figures shared with Climate Home News state that the solar plant can provide 12-16 hours of electricity per day, but in practice refugees typically get 10-11.

Many young refugees say it is still not enough for their education, work and day-to-day life, as many of the opportunities are online.

Hanan Mudhib Al-Nuseirat, 24, who has lived in the camp for almost as long as Abbas, does remote data entry work to fund his engineering studies. “I am a student and I work and the limited hours of electricity provided is not enough to be able to do both,” she says.

Taima Al-Hariri, 18, just finished high school and is seeking a scholarship to fund further education. She is working with relief organisations inside the camp until then.

“My work requires long hours on the mobile phone and I am not able to charge its battery enough. I also have to make time to study and improve my skills in the limited hours of electricity I have,” she says. Al-Hariri lives in a family of six and has to share charging devices and plugs with them when there is electricity.

Several residents of the camp who are both studying and working use their phones as a light source to study when it is dark. 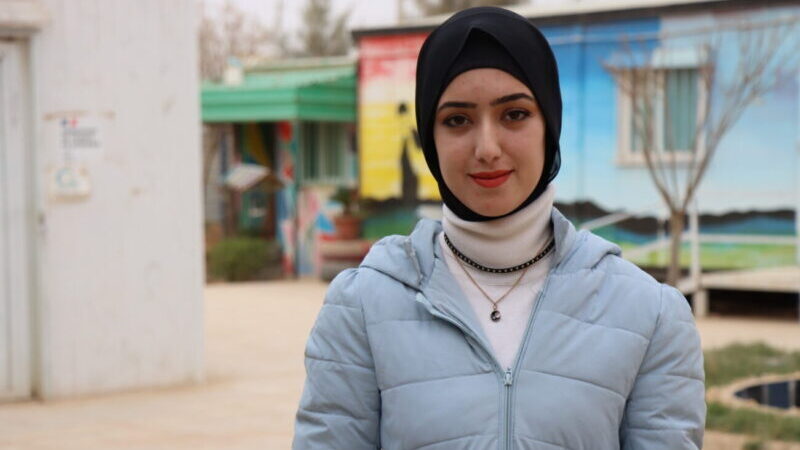 Taima Al-Hariri has lived in Camp Za’atari since 2012, when she fled Syria. (Photo: Younis Al-Haraki)

UNHCR’s Al-Taher says there are no imminent plans to expand the solar plant. “It all depends on funding. Someone was willing to fund this and so it happened,” he says, adding that it was an operational priority for the UNHCR and made possible through its efforts and advocacy.

While restrictions on work and movement – to an extent – have become more relaxed over the years for Syrian refugees in the camp, there is no indication that they will be granted citizenship.

Yet, the majority of the refugees have nowhere else to go. According to a 2017 UNHCR survey, 73% of Syrian refugees in the camp had “no intention to return [to Syria] in the next 12 months”. In general, UNHCR estimates that an average refugee (not just Syrians) spends 17 years inside a camp.

Abbas is among those who not see resettlement in the near future. “I don’t know when my family will move out of the camp and where. 10 years ago, I wanted to go back to Syria but what do we even return to right now? This is home for now. Not forever hopefully but for some more time,” she says.

Despite the groundbreaking nature of the project, there have been few independent evaluations of its impact.

Lauren Burns from the University of Mississippi published a dissertation on Camp Za’atari’s energy in 2019. She tells Climate Home it was difficult for researchers to access the camp.

“I tried to have an entry permit while I was working on my dissertation but it was impossible,” she says. “This might explain why there hasn’t been any further detailed research or reporting from the camp since. The bulk of the information we have is what was shared by UNHCR when the plant was launched but there has been surprisingly little follow-up research.”

Based on the information available, Burns argues that the project can be a model for a wider renewable energy rollout in Jordan.

Jordan depends on imported oil and gas for the majority of its electricity. It suffered major disruption in 2009, when its main gas pipeline from Egypt was cut off as a result of the Arab Spring. Since then, energy security has been a priority, with renewables part of the plan to become more self-sufficient.

Affordability is also a sensitive issue – in 2020, after higher electricity bills during the pandemic and a harsh winter, activists called on the government to review electricity tariffs and launched a hashtag on Twitter urging Jordanians to not pay their bills.

“If Jordan works on developing its own renewable energy sector, it will not have to depend on others for energy as much as it does now,” says Burns. “It will reduce electricity costs and reduce the chances of massive outages in the future.” 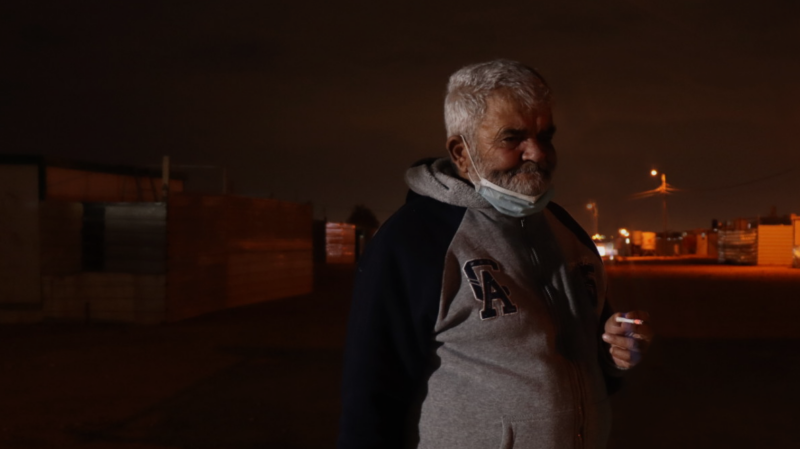 A man returns home from the market at night (Photo: Younis Al-Haraki)

Before the war in Syria began, Jordan was struggling to support a booming population with a weak economy. An additional 2.5 million refugees in the last decade has compounded pressure on resources.

According to the Jordan Response Plan for the Syria crisis, household energy consumption has increased by 34% since the beginning of the conflict but the per-capita usage declined by 21%, reflecting that large families are often squeezed into small homes.

“A renewable sector can diversify the economy, create jobs, and offer an environmentally and economically viable solution to Jordan’s thinning out resources,” says Burns. “I think a way is already being paved to jumpstart the renewable sector and refugee camps operating entirely on solar energy are great case studies of the positive impacts more renewable energy can bring to the country.”

This article is part of a climate justice reporting programme supported by the Climate Justice Resilience Fund. Cover photo by Younis Al-Haraki.