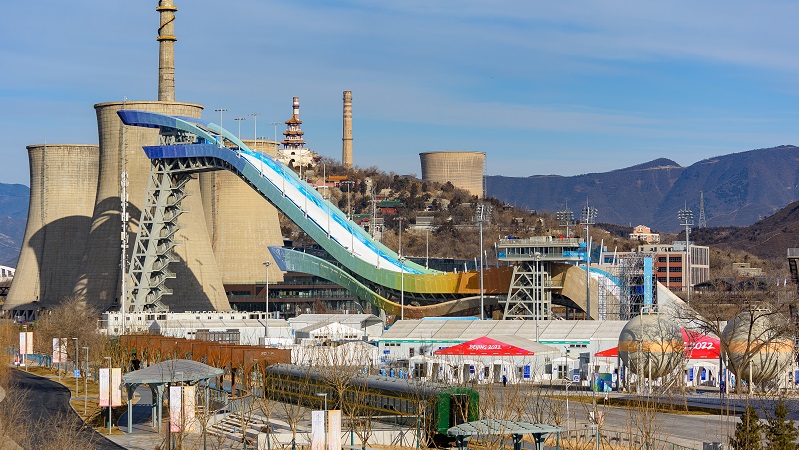 The Shougang Big Jump venue with the old steel mill behind (Photo: N509Z/Wikicommons)

As they fly through the air, spinning their way to olympic glory, freestlye ski jumpers are usually framed by snow white mountains.

But, as gold-medal winning Chinese-American teenager Eileen Gu spun four and a half times in the air, the backdrop was three Olympic-ring branded cooling towers.

On social media, it was mocked as “dystopian”, a “hellscape” and a symbol of climate change. Users speculated that it was a nuclear power or coal plant.

It’s actually the disused Shougang steel mill. Previously the city’s biggest polluter and one of its biggest employers, it shut down before the 2008 Olympics due to concerns over air pollution.

Asked about the mockery, Beijing-based Greenpeace activist Li Shuo told Climate Home News: “I can’t comment on other people’s taste… For me, it is breathtaking. Just stunning,” he said.

The cooling towers were compared to The Simpson’s fictional Springfield nuclear power plant but Li said: “There are at least two themes that are meaningful if one bothers to dig a little deeper than Homer Simpson”.

First, he said, “it tells people that sports could be close to you, not necessarily in the Alps thousands of miles away”.

Second, he said, “it highlights a city’s transition towards a low-carbon economy and the tangible progress that can be achieved”.

Referring to London’s disused coal plant turned art gallery, he asked: “How come Tate Modern is cool and Big Air Shougang is not?”

London’s Tate Modern used to be a coal power plant but is now a modern art gallery (Photo: ReservasdeCoches.com/Flickr)

Over the last two decades, China’s capital has reduced its air pollution significantly by curbing coal smoke from heavy industry and home heating.

The area around the steel mill, which was built in 1919, was tranformed into a destination for tourism and cultural events, hosting weddings, electronic music festivals and breweries.

Engineering firm Arup, who redeveloped the site, claims it did so in a low-carbon way with green buildings, transport and energy. The company also claims the area’s design helps absorb rainwater, reducing the risk of flooding.

While Beijing’s air quality has benefitted from the mill’s closure though, the atmosphere hasn’t. The Shougang company opened a new mill a few hours’ drive out of town in Hebei province. So coal is still being burned to make steel, just not in Beijing.

On top of this, according to Centre for Research on Energy and Clean Air analyst Lauri Myllyvirta, some of the pollution wasn’t banished far enough away for Beijingers.

“All the heavy industry from Beijing was moved to different parts of Hebei [before the 2008 olympics], assuming that’s so far away – 300/400 km – that it is not going to affect Beijing any more,” he said .

“But in the following half a decade the industry mushroomed to such a size in Hebei that that became a much bigger problem for Beijing’s air quality,” he added.

The games’ environmental critics have pointed to the use of energy and water intensive fake snow, both at the venues in Beijing and at the Zhangjiakou ski slopes, a three hour drive north of Beijing.

This is the Winter Olympics in the era of climate breakdown. The first winter games to rely almost entirely on fake snow. The hills outside Beijing are snow-free, so 49 million gallons of water and 300 snow guns have been used to create this. pic.twitter.com/wYtB6qMGII

Fake snow is needed because, although it is cold, the area is dry. Evaluting Beijing’s bid, the International Olympic Committee said: “Northern China suffers from severe water stress and the Beijing-Zhangjiakou area is becoming increasingly arid.” It blamed this stress on climate change, intensive industrial and agricultural use and high domestic demand.

Beijing is not the first host city to struggle for snow. As early as 1964, Austrian volunteers had to carry and hand-pack ice into snow for the Innsbruck games. New York’s Lake Placid was the first games to use snow machines in 1980. In recent years, their use has become routine. They were used in Vancouver in 2010, Sochi in 2014 and PyeongChang in 2018.

But Beijing is the first games to rely completely on fake snow. Strasbourg University geographer Carmen de Jong told the Wall Street Journal that making this snow could use two million cubic metres of water, worsening the region’s water stress.

Turning water to snow is also energy-intensive although the venues’ developer claims the snow canons are powered by nearby wind farms.

The trend towards fake snow is likely to intensify at future Winter Olympics as the climate heats up. Of the 21 past venues, a study by the University of Waterloo found that only 12 will be cold enough to host it with real snow again in the 2050s, even if the world meets its Paris climate targets.

Places like Russia’s black sea resort of Sochi and the Alpine towns of Grenoble, Garmisch-Partenkirchen and Chamonix will be too warm, they found.

This study only took into account temperature, not rainfall levels. So it included Beijing in its list of  eight hosts which will stay “climate reliable” even in a high-emissions scenario in the 2080s.

The next games will be hosted by the Italian city of Milan and the nearby ski resort of Cortina d’Ampezzo. According to Waterloo University, this will be reliably cold enough for snow.