As Norway, UK and Germany commit millions to protect the Congo rainforest, a damning report shows governance in chaos 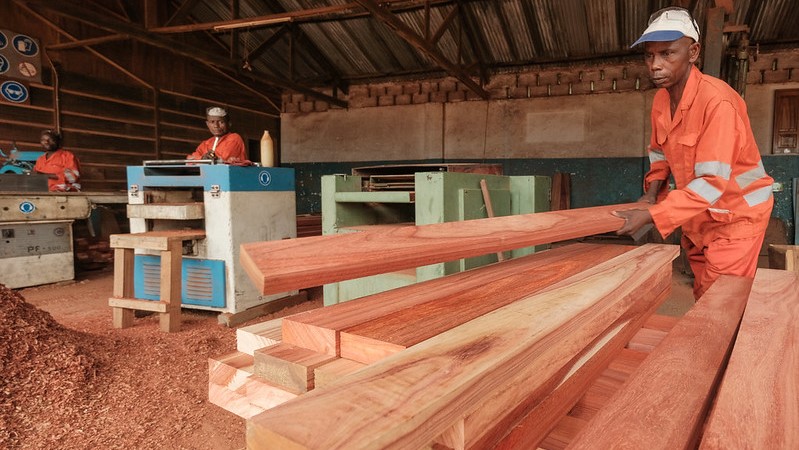 Wood processing at the Compagnie Forestiere et de Transformation (CFT) in Kisangani, DRC. The French company is named in the audit as having failed to pay appropriate tax and contested the auditors' investigation (Photo: Axel Fassio/CIFOR/Flickr)

Six successive ministers in the Democratic Republic of Congo illegally allocated at least 18 logging concessions between them and repeatedly violated forest laws, a national audit has found.

The report by the General Inspectorate of Finance (IGF), finalised in May 2021 but not published until last Friday, paints a scathing picture of failed forest governance from the top of the ministry down through the administration’s ranks.

It describes “a situation of chaos” which benefits those involved in the sector and slams the “culpable laxity” of the environment ministry.

It finds that the country’s forest code hasn’t been implemented since its introduction in 2002 and that officials repeatedly violated a moratorium on new logging concessions. More than $3 million in royalties are unpaid by logging operators, with officials failing to enforce the tax regime.

“This much-delayed audit report lays bare the lawlessness and impunity that reigns in DRC’s logging industry and yet doesn’t even speak to its severe social and environmental cost,” Joe Eisen, executive director of the Rainforest Foundation UK, told Climate Home News.

Home to the world’s second largest rainforest and carbon-rich peatland, the Congo Basin is critical to meeting global climate goals.

At Cop26 climate talks, international donors pledged $500 million over five years through the Central African Forest Initiative (Cafi) for DRC to protect the forest. Publication of the IGF audit by the end of 2021 was the first milestone.

On the eve of Cop26, president Félix Tshisekedi instructed environment minister Eve Bazaiba to immediately suspend all “dubious” forest concessions. But none of the concessions identified in the report were cancelled at the time.

In response, Bazaiba announced the creation of a ministerial commission to revisit all forest concessions in DRC on a case-by-case basis with the aim to recover any illegally allocated concessions.

The ministry added that the report “demonstrated not only the dysfunction in the forest sector” but “highlights the need of a cleaning up of the sector through coercive and urgent measures”.

Under the deal with Cafi, which is largely funded by Norway, Germany and the UK, the DRC government committed to reduce deforestation, promote the regeneration of eight million hectares of degraded land and forests, and strengthen forest governance and law enforcement.

Subject to certain conditions, it allows for the DRC to lift its moratorium on new logging concessions from 2023. Campaigners argue that in light of the governance failures revealed by the audit, that would be premature.

In a letter sent to Cafi’s secretariat and DRC’s international donors on Thursday, and seen by Climate Home News, forest campaigners called on the initiative to take “take swift and appropriate measures to address [the audit’s] damning findings including that the national logging moratorium be extended indefinitely”.

It called for the cancellation of all illegal concessions, the prosecution and sanction of former ministers and operators that acted illegally and an investigation into the delay in publishing the audit. Failure to act would undermine the $500m deal and any efforts to improve forest governance in the country, it warned.

For Irène Wabiwa Betoko, Greenpeace Africa’s international project lead in the Congo Basin forest, allowing the government to lift the moratorium in this context “would be pure folly”.

“If donors really want to protect DRC’s forests, they have to work instead on cleaning up the mess in the forest sector. It’s not by expanding logging concessions that the DRC government will bring back good governance in the forest sector – it needs a long-term plan for forest protection,” she told Climate Home.

Cafi has a “very important role to play” in doing so, she added. The initiative must ensure that any deal is “helping to stop deforestation, ends impunity and eradicates corruption. Otherwise, it will be money thrown out of the window,” she said.

A spokesperson for Cafi told Climate Home that it “commended” the publication of the audit and would discuss the conclusions with its board. They added Cafi would continue to work with the DRC government “on strengthening forest governance, which requires swift, decisive actions and sustained efforts over time”.

The audit provides a snapshot rather than the full picture of the situation.

Since the IGF completed its work, campaigners have identified yet more illegal contracts. Greenpeace estimates their number to stand at 24.

Meanwhile, the work of the auditors was made challenging by the lack of accurate information from forest officials and resistance from some logging operators who contested the audit, including the French Compagnie Forestiere de Transformation (CFT).

Only 45 logging companies could be located – a “very limited” number with the majority of operators’ addresses being “inaccurate or simply non-existent”.

While it stopped short of alleging corruption, the report denounced “deliberate favouritism” by ministers in the way some concessions were allocated.