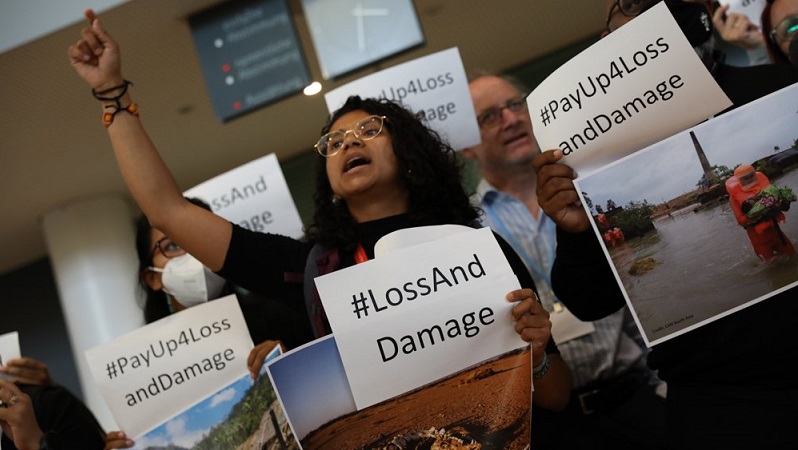 Campaigners demand loss and damage finance during a protest at the preparatory climate talks in Bonn, Germany (Photo: IISD/ENB/ Kiara Worth)

Climate vulnerable nations’ frustration at a process that is not delivering for those suffering on the frontline of the climate crisis is turning to anger.

As negotiators gathered in Bonn to lay the ground work for Cop27 in Egypt later this year, a controversial compromise on funding for victims of the climate crisis was back at the fore.

Rewind to last November at the Cop26 in Glasgow. Developing countries demanded a funding facility to help victims of droughts, floodings, storms and sea-level rise recover. The US and EU blocked the move and climate vulnerable nations had to settle for a “dialogue” on the issue.

This week, small island states made their grievances about the dialogue known on its first meeting. As campaigners loudly pointed out, it hasn’t made the cut on the negotiations’ formal agenda and risks being little more than “a talking shop”.

“The Glasgow Dialogue appears to be a one standalone dialogue with no clear destination,” said Michai Robertson on behalf of the Alliance of Small Island States (Aosis). They want a mechanism for hard cash to be distributed to victims of climate disasters and they want it by Cop27. The details can be worked out along the way.

The dialogue isn’t scheduled to end until 2024. Vulnerable nations simply cannot wait until then.

This week’s (and last’s) stories…

Humanitarian aid is not keeping up with rocketing needs. And intensifying climate impacts have held back their economic growth in the last two decades. Had it not been for these losses, vulnerable countries would be 20% richer – money which could have been invested in resilient infrastructure, social protection measures and early warning systems to help societies prepare for future shocks.

In India, where people have been exposed to prolonged deadly heat and devastating pre-monsoon flooding, Skand Agarwal writes that the government’s adaptation grants have fallen to a quarter of their 2017-18 levels, hindering local adaptation strategies. While the need for adaptation finance continues to grow, the international community is failing to fill the gap.

The consequences are well known. The less action there is to cut emissions and the less adaptation finance flows to help communities cope, the greater the humanitarian need will be.

Rich countries have repeatedly refused to accept liability for their historic responsibility in causing the climate crisis. On finance for loss and damage, they have stalled for three decades. But how long can this last?  The issue is set to dominate this year’s climate talks and vulnerable nations won’t be easily convinced to go home empty handed once more.