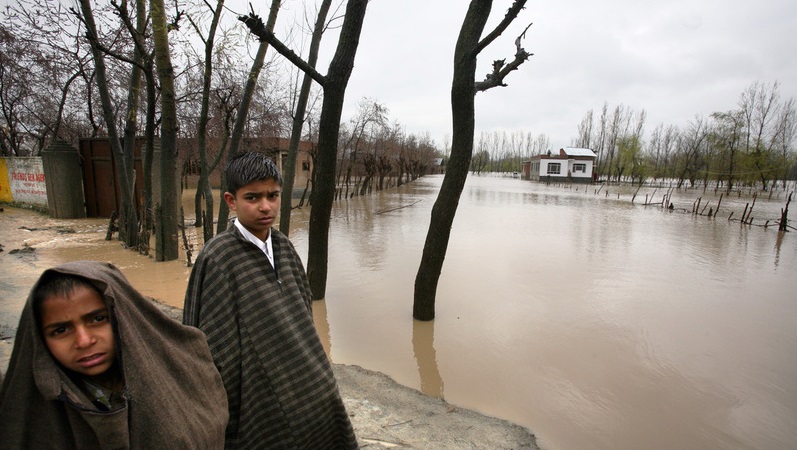 A flooded village in Bangladesh in 2007 (Photo: Javeed Shah/Greenpeace)

Denmark has become the first fully-fledged country to pledge funds to developing countries specifically for “tab og skader”, which translates to “loss and damage”.

The Nordic nation committed 100 million DKK ($13m) to build resilience and help climate victims recover during a ministerial meeting on the sideline of the UN General Assembly in New York on Tuesday.

While the amount pledged is relatively small compared to mitigation and adaptation finance, the move breaks a taboo among rich countries over giving money to address the unavoidable losses and damages already caused by climate change.

Announcing the funds, Denmark’s development minister Flemming Møller Mortensen said: “I saw for myself in Bangladesh this spring that the consequences of climate change need increased focus.”

“It is grossly unfair that the world’s poorest should suffer the most from the consequences of climate change, to which they have contributed the least. With this new agreement, we are putting action behind words,” he continued.

“I hope it will have effect both for the people on the ground who already are facing climate induced loss and damage, and for negotiations between rich and poor countries, where the debate about loss and damage for far to long has been full of conflict,” he added.

The commitment by Denmark to mobilise funds for loss and damage is “a step in the right direction”, he added. The move “hopefully can inspire other countries to follow,” Söderberg said.

During last year’s Cop26, the G77, a block of more than 130 developing countries, made a push to create a finance facilty to support victims of climate-related disasters. The initiative was blocked by the EU and the US.

Under the Paris Agreement, all countries agreed to address the “loss and damage associated with climate change impacts”. But rich countries have fiercely resisted providing specific finance for this, as they do not want to accept liability and risk being sued by climate vulnerable nations.

Previously, only Scotland and the Belgian region of Wallonia have pledged funding for loss and damage. Neither is a member state of the United Nations.

Of the 100m DKK ($13m), 35m DKK ($5m) will go to a Frankfurt-based organisation called InsuResilience, which subsidises insurance in poorer countries. In 2021, InsuResilience aimed to spend €7m, conducting projects on a small scale.

A further 25m DKK ($3m) is set aside for “strategic efforts within climate-related loss and damage which can support the current climate change negotiations up to and during Cop27”. Further details will be published in the coming months.

Harjeet Singh, a long-time campaigner on loss and damage from Climate Action Network International, told Climate Home that pledges to the German government backed InsuResilience fund were “merely a smokescreen to distract from the direct support that impacted communities need”.

He said that insurance is not a solution to slow-onset events like sea-level rise, glacier melt or desertification. Singh added that the world’s poorest often can’t access insurance, even if it’s subsidised, because of a lack of money or financial literacy.

Singh called for rich countries to stop blocking the proposal from developing nations for a new finance facility to address loss and damage at Cop27.

Some campaigners consider such a facility to be more reliable, as it would ask for money from rich countries based on a formula which works out what they owe. As such, it would be less dependent on the whims of wealthy countries.

Opponents of such a facility say that it would take a long time to set up and would still not be able to force rich countries to give money to it.