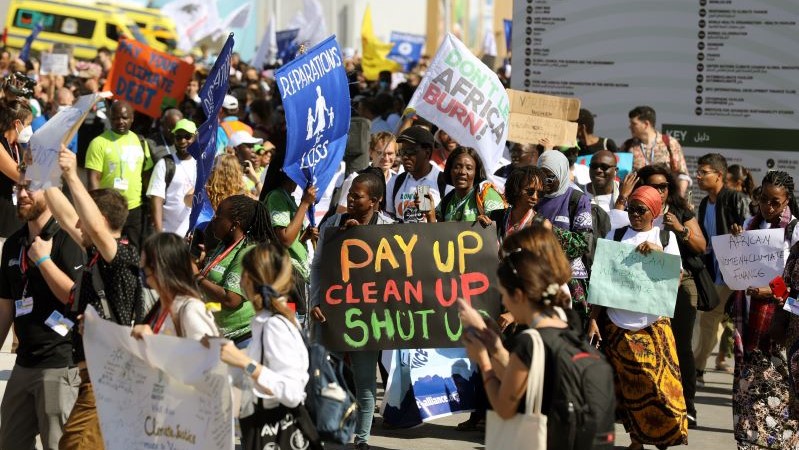 Activists demonstrated inside the Cop27 venue on Saturday, instead of the traditional street march (Photo: IISD/ENB | Mike Muzurakis)

As ministers fly in for week two of Cop27, what does winning look like for the Egyptian presidency? Do they just want to sell some hiked-up hotel rooms and snorkels and get a few snaps of Abdel Fattah el-Sisi and Joe Biden trading jokes? Or do they want something meaningful on climate?

A loss and damage finance facility would be a huge Egyptian gift to the developing world. But, as John Kerry said on Saturday, “that’s just not happening” because the US and others still fear being sued for their historic pollution.

Instead, the rich world is offering a hodge-podge of initiatives like insurance and early warning systems. Some vulnerable countries are working with them on this.

But the sums of money involved pale in comparison to the toll of disasters like Pakistan’s floods. And all these worthy initiatives don’t need a Cop to go ahead.

To the extent that Egypt has outlined a goal, it is to promote “implementation”.

So it’s the coalitions and the side deals in the trade fair bit of Cop that matter to the presidency.

Well, the trade fair is heavy on oil and gas greenwashing. A flagship initiative to finance African renewables folded due to a bad choice of partner.

In the negotiating rooms, there’s no consensus on how to strengthen national emissions cuts and trade carbon. A draft political statement for the summit – the “cover text” – has yet to appear.

If there’s any vision behind this Cop, the Sharm Pact is the place to show it. Otherwise, it will be remembered for jailed activists, gas deals and rivers of sewage.

The other place to look for political direction is the Indonesian island of Bali.

If presidents Joe Biden and Xi Jinping manage to find some good vibes ahead of a G20 summit, it could unlock a US-China climate statement.

It helps Biden’s authority somewhat that Democrats are set to keep control of the Senate, regardless of the Georgia runoff result. The House of Representatives is still too close to call, with 20 seats left to declare.

A thawing of relations could mean resumed technical cooperation on things like curbing methane emissions. Based on climate envoys’ statements last week, don’t expect it to magic up finance for loss and damage.

The UN has suspended two people registered in Colombia’s delegation at Cop27 over sexual harassment complaints, the country’s government said in a statement on Sunday.

The Colombian minister of the interior, Alfonso Prada, emphasised the accused were not government officials. One of the named people had never traveled to Sharm el-Sheikh, he said, suggesting their credentials had been used illegally.

The Colombian delegation at Cop27 told Climate Home News that there is an open investigation and declined to comment further.

The country’s delegation at the climate talks is composed of 201 people, among them government officials, private sector and civil society representatives.

“Our government strongly rejects any conduct that disrespects or harms women and violates their rights and freedoms anywhere in the world,” the minister said.

Dirty deal takes hit – The German government agreed to leave the Energy Charter Treaty, which has been the most important tool for fossil fuel companies to sue governments for loss of profits after climate policy changes. Germany is now the biggest economy to leave the deal. Spain, France and the Netherlands have all also left the treaty for its protection of fossil fuels.

Drones overhead – A pair of powered paragliders flew over the Cop27 venue on Saturday morning with advertising banners for ADES, an oil and gas drilling services company. Perhaps they were trying to catch the eye of one of the 636 registered fossil fuel lobbyists.

Dash for gas – Turkish Petroleum and Algeria’s Sonatrach agreed to establish a joint oil and gas exploration company that will operate in the region and “especially in Algeria”, said Turkish energy minister Fatih Donmez. In recent months, Algeria sealed deals with Italy and Spain to increase gas supplies to Europe.

Stranding risk – Building gas infrastructure to meet short term needs is a bad bet, warns Carbon Tracker. By 2030 it projects it will be cheaper, across Africa, to generate electricity with new solar than run existing gas plants. That spells financial instability for gas producers like Nigeria, Algeria and Egypt.