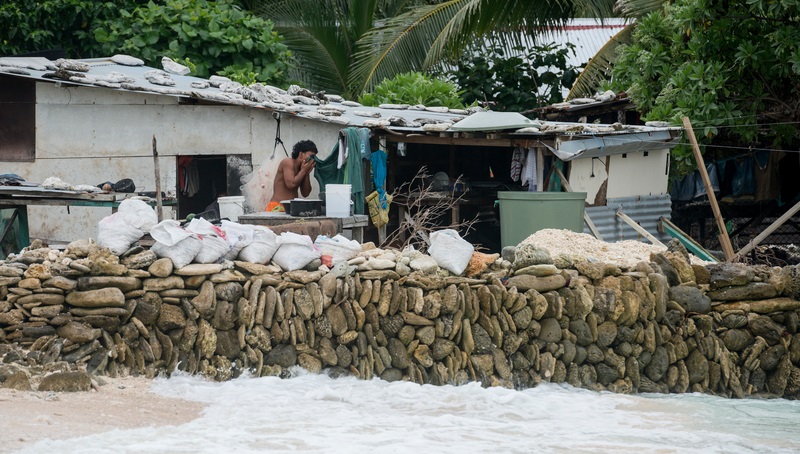 House with a sea wall in front of it in Kiribati (Photo: Christan Aslund/Greenpeace)

Three climate vulnerable Pacific nations have asked the world’s governments to agree to aim to make international shipping emissions-free by 2050.

In a proposal to the UN’s shipping body, the Marshall Islands, Solomon Islands and Kiribati cited a major report published earlier this month summarising the latest climate science.

The Intergovernmental Panel on Climate Change (IPCC) said to limit global heating to 1.5C, the more ambitious goal of the Paris Agreement, global carbon dioxide emissions must fall rapidly and reach net zero by 2050. On current trends, the temperature threshold is due to be breached by 2040.

In a letter to his fellow delegates, the Marshall Islands’ ambassador to the International Maritime Organisation (IMO) Albon Ishoda wrote: “The findings of the recent [IPCC] report could not be clearer and fill us, the most vulnerable to this climate emergency, with alarm.”

He added: “Humanity is at a tipping point. Without immediate and decisive action to now peak and rapidly reduce the greenhouse gas emissions of all sectors, states and cultures such as ours will be consigned to history.”

In 2018, shipping produced more than a billion tons of carbon dioxide equivalent globally, a 10% increase on 2012 and more than the annual emissions of Germany.

World governments’ current plan, agreed after fierce debate at the IMO in 2018, is to reduce international shipping’s emissions at least 50% by 2050 on 2008 levels while pursuing complete decarbonisation. Cargo ships have a life expectancy of 25-30 years, making the long term goal directly relevant to ships built this decade.

As well as absolute emissions reduction targets, the current strategy says carbon intensity – the emissions from each tonne of cargo shipped a given distance – should be reduced 40% by 2030 on 2008 levels. That translates to a 2% reduction each year. Ishoda dismissed this as “business as usual”.

The lesson from German floods: prepare for the unimaginable

The island states’ proposal will be considered at the IMO’s next environmental committee meeting 22-26 November, shortly after UN climate talks at Cop26 in Glasgow, UK.

In 2018, there was resistance to high ambition on climate from major emerging economies like Brazil and India, oil producers Iran and Saudi Arabia and seafaring nations like the Philippines. They raised concerns a stronger target would increase costs, holding back trade and development.

The US, which opposed the existing target under Donald Trump, is taking a more ambitious line on climate action under Joe Biden. How that applies at the IMO is unclear. In April, climate envoy John Kerry said that shipping should have zero emissions by 2050, but at the IMO in June the US representative declined to endorse a proposed carbon price on bunker fuel.

Ishoda told Climate Home News: “We are not naïve to the idea that it may be a very difficult discussion in the IMO – but we are also not naïve to the most recent IPCC report which has clearly justified that more needs to be done in terms of emissions reductions.”

The IMO’s current climate targets were agreed at this MEPC meeting in London in 2018 (Photo: IMO/Flickr)

Smith said “it is possible to be passed”. He added: “There is a lot of pressure on the IMO because [the last environmental committee meeting] MEPC76 was so underwhelming and that will likely lead to it being quite heavily criticised at Cop26.”

The Paris Agreement, signed by 196 countries, aims to hold global warming to “well below 2C” above pre-industrial levels and pursue efforts to limit it to 1.5C. According to Climate Action Tracker, the IMO’s current targets are consistent with more than 3C of warming.

Since the IMO’s strategy was agreed in 2018, many countries have committed to net zero within their borders by 2050. Smith said: “If you’re already signed up to net zero by 2050 in your economy, why would you not want zero emissions in the international shipping?”

Those signed up to net zero by 2050 include Argentina and Chile, coastal countries heavily reliant on shipping that have opposed climate action at the IMO.