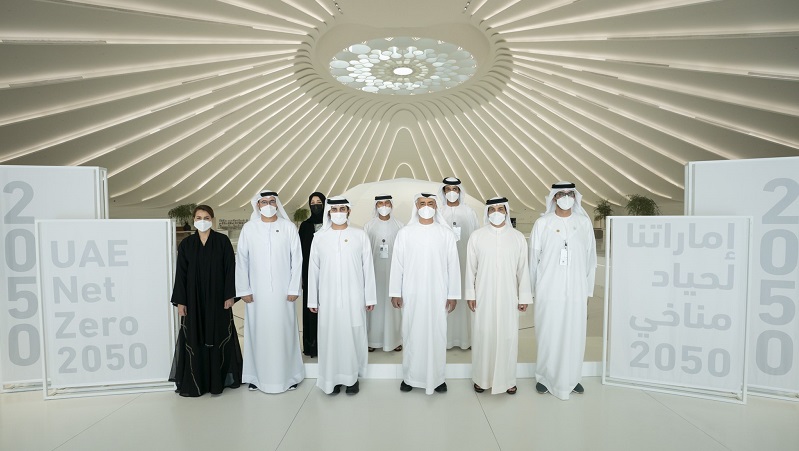 He tweeted: “Our development model will take into account this goal and all institutions will work as one team to achieve it.”

The UAE previously committed to reduce its emissions 23.5% by 2030, compared to a business-as-usual baseline and to get 50% of its electricity from renewables and nuclear by 2050.

The United Arab Emirates is hoping to host the Cop28 climate talks in 2023. Only South Korea has put in a rival bid.

This means that the UAE, the world’s eighth-biggest oil producer in absolute terms and the second-biggest per capita, does not necessarily have to reduce the amount of oil it produces to meet its goal.

But the process of producing oil does emit significant amounts of greenhouse gas and these are counted towards the UAE’s figures.

Emissions from oil production can be reduced through measures like monitoring for gas leaks, repairing them and investing in cleaner machinery.

A map of flares, where gas is deliberately burnt as a waste product during the oil and gas production process, across the UAE and wider region (Photo: Capterio/FlareIntel)

Like other oil-producing nations, the UAE has been trying to diversify its economy to prepare for a future after fossil fuels.

The UAE joins a number of advanced economies, and a few developing ones, in setting a 2050 net zero target.

Of those, the US, UK and Canada have promised to decarbonise their electricity systems by 2035. It is currently unclear whether the UAE plans to update its energy strategy to reflect its new 2050 goal.

Further details on the plan may be announced at the Middle East Green Initative summit in Riyadh, Saudi Arabia, on 25 October.